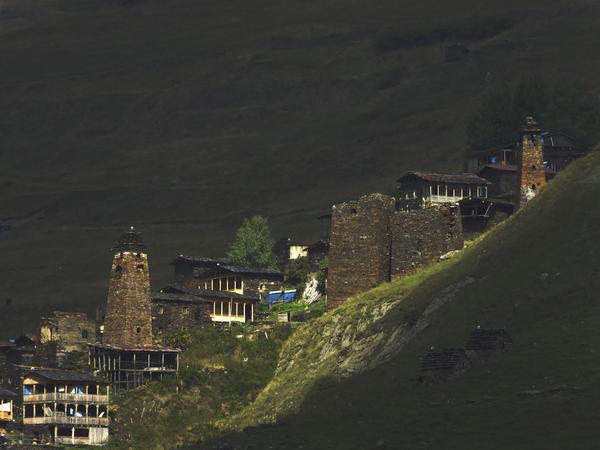 “At the beginning of the world, God called humans to a meeting so that He could share our land among the numerous different peoples. But we Georgians were out boozing. So we were late.” Our guide, Georgi, pauses to pour the next round of fiery chacha, a local form of grappa. “By the time our folks arrived, all the land had been parcelled out. Or so it seemed. But, the Georgians didn’t give up. They explained to the Almighty: ‘The only reason we were late is that we were toasting to Your divine health.’ Whether flattered or just enjoying their chutzpa, God relented. Indeed, more than just merciful, He actually gave them the little slice of heaven on Earth that He had saved especially for Himself.” Georgi swivels his head around, admiring the awe-inspiring grassy uplands and clouds swirling in front of snow-topped peaks that just occasionally materialise like apparitions. Then he raises the shot glass that he’s carved out of a plastic water bottle and declares: “Sakartvelos Gaumarjos! (Cheers to Georgia!).” And we down another round of drinks.

So yes, we’re in Georgia — the original Caucasian Georgia, not the U.S. state. Few other places in the world are so oozingly steeped in myth, passion, and unbridled hospitality than this land of the Golden Fleece. And, underpinning everything else is still that inimitable ancient culture that celebrates life through wine — a drink that the Georgians are convinced was first fermented here. Georgia’s almost Chaucerian codes of drunken chivalry seemed romantic when I first read about them. But in situ the emotion is much more visceral and dizzying. Not least because we’re chugging the third down-in-one toast — at 10:30 in the morning. And after our ascent up a scenic, windswept ridge, Georgi — whose nickname, “The Beast,” suggests he’s not a man to be disagreed with — wants to drink just a few more toasts — to friendship, peace, women… and he happens to know where his shepherd friends hide backup supplies of chacha. Half a litre later, we’re all best friends.

This episode marked just the last stage of a magnificent trek that took the better part of a week from Omalo, the summer capital of Tusheti, to Juta, near Kazbegi, whose Alpine horizon is surely the most iconic landscape in the whole Caucasus. Fortunately for our livers, The Beast was an emergency stand-in guide for the last day’s trek from Roshka, after we’d cheated a little and hopped in a jeep for the one route section that is realistically passable by 4WD. That starts in the village of Shatili, a medieval cluster of dark stone tower houses huddled so close, they form what appears to be a single citadel fortress. It’s populated year-round, though for at least half of the year, snow cuts off all access to the outside world. “How do you cope with the winter?” we ask our hosts, whose little garden looks deceptively suburban. “We think a lot,” they reply. “And keep warm.”

The main trek, four days between Omalo and Shatili, lacks the soaring peaks of the Kazbegi area, but the isolated shepherds’ trail is one of Georgia’s great undiscovered marvels linking a series of tiny settlements, stone ruins, and surreal tower houses through constantly changing landscapes. It’s one of the few genuinely practicable sections of the mooted Black Sea to Caspian Great Trans-Caucasian Trail, the completion of which may be a bit of a pipe dream these days, thanks to awkward political situations in South Ossetia and Abkhazia. But even this section has its challenges. The starting point might be called Tusheti’s “capital,” but old Omalo is miniscule and Tolkienesque: Above a somewhat overgrown village square of stone-and-wood houses rises a grassy knoll capped by a row of ruined medieval towers; beyond that are khatebi — animist cairns topped with horns that women are forbidden to approach. Winters are so viciously cold here that the whole population decamps from late September, taking its sizeable flocks of sheep down to the wine-growing lowlands of Kaheti, and across the perilous 2,900m (9,514 ft) Abano Pass.

Despite its seasonal nature and sheer tininess, Omalo proves surprisingly user-friendly. By next morning we have already found a charming guide, the acrobatic horseman Tedo Shabalidze, who agrees to lead us to Shatili. As the morning mists rise, we descend coniferous woodlands to the timeless all-stone settlement of Dartlo, where a medieval-looking homestay provides coffee and cake. Plus wine, of course. Shepherd pastures and glorious riverside paths lead on to Girevi. That’s the last seasonally inhabited village before the trail crosses a thigh-deep river. Astonishingly, as we zigzag up the bald 3,430m (11,253 ft) Atsunta Pass, we bump into a group of Czech cyclists lugging their mountain bikes and hoping for a widening of the trail. Beyond is a majestic area of ridge-walking before a slithering descent into the Khevsureti Valley, passing the startling crag-top citadel of Mutso high above the steadily improving track. Before entering Shatili, the river makes a dogleg bend around the Anatori Crypts, semi-open medieval grave sites where, according to local lore, those infected with the plague would take themselves to patiently await their fate, and avoid infecting others.

In the 1990s there was an altogether different danger here: post-Soviet insecurity led to the infiltration of heavily armed Chechen rebels who made the whole of this area too dangerous to explore. But since the mid-noughties, peace and security have been restored, partly through the creation of Tusheti National Park (www.tusheti.ge). Rangers check visitor documents and help keep a helpful eye on stray hikers. Nowadays, the main danger here and elsewhere in Georgia, other than getting too close to ferocious sheepdogs, is succumbing to the all-encompassing hospitality that’s likely to sweep you up in a delightful drunken mist of song and celebration, from bustling city centres to remote mountainsides. Sakartvelos Gaumarjos! Cheers to Georgia.