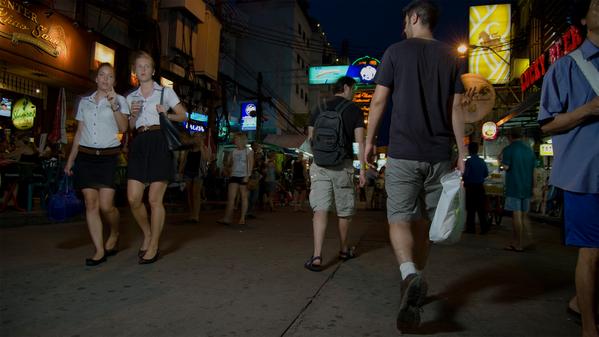 Next stop: Asia. G Adventures' own Phil Wild books a ticket on the most-used modes of transportation in this busy city.

So, you’re in Bangkok and you need to get from one part of the city, where you are, to another. It’s a trip that, if poorly planned, might lead you to melt in the humidity (which can often rise above 130%).* I'm here to help. Metaphorically (and literally for a fee), I'll hold your hand while we experience Bangkok transportation from all angles. Let's do this.

*Not actually true or in fact, possible.

The original. Accept no substitutions. The best way to experience a city, walking gives you the sights and smells with some local interaction thrown in for good measure. Want to stumble your way through a Thai conversation? Take to the street, my friend. Just make sure you're not in a hurry.

Speed: Like booting up your seven-year-old computer. Cost: Free! Adrenaline Factor: One cup of coffee.

Look, there's no doubt a tuk-tuk is pretty representative of Bangkok, and it's a cool way to get around. Just know that your route from A to B might become A to B to C to D, and that letters A through D represent gem, suit and jewelry stores.

But if you don't mind partaking in a bit of shopping, and you're not in a hurry, go for it.

Speed: Like choosing an outfit for the day. Some will take longer than others. Some should have started yesterday, in fact. Cost: Cheap to very cheap, depending on your negotiation skills, and your ability to exercise self-restraint while shopping. Adrenaline Factor: One can of Red Bull.

The Bangkok subway, called the BTS or Skytrain, is for those who want to get to a specific destination, want the cost subsidized by hundreds of other riders, and don't mind that they can't direct their transportation off the agreed-upon route. That's trains in a nutshell.

Boats in Bangkok are used primarily to access the floating markets of Taling Chan, Bang Ku Wiang, Tha Kha, and Damnoen Saduak. While they are pretty touristy these days, it's still a nice glimpse into Bangkok's past and unique way of life.

For best results, go in with a group and hire your own boat driver. And as with all things in Bangkok, be prepared to haggle!

Speed: Quick if you hire an Olympic-standard foursome. Otherwise, not so much. Cost: Variable. Be prepared. Adrenaline Factor: It's all good until you end up out of the boat.

Not for the faint of heart! Combining all the speed of a motorbike with the safety of, um, an aggressively driven motorbike, the moto-taxis will get you to a close by destination in half the time of any other method. It's how the locals do it.

Thailand's largest city is a big place and conquering it requires some good planning, knowledge of the transportation system, a positive attitude and the knowledge that it’s all going to work out. (And it will.)

G Adventures runs a number of departures with wide range of dates and activities to Thailand to cater for different tastes. We’re thrilled at the prospect of showing you this wonderful planet as you’ve never seen it — check out our small group trips to Thailand here.