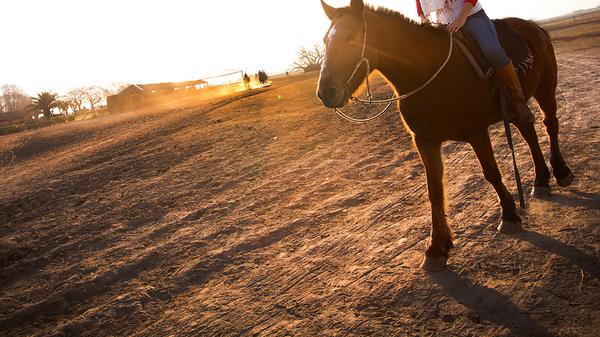 In Argentina, the gaucho is more than just a cowboy

First, a micro history lesson. A cursory understanding of the Argentine War of Independence helps the gaucho transcend his easy definition of “just a cowboy.” Sure, there’s the rugged romance of a free-range life, a man and his horse inseparable, a passionate temperament, and a sharp knife. But gauchos were also soldiers for independence from colonial Spain — and heroes to a generation of Argentineans.

You know the basics of this story already. Europeans — predominately but not exclusively Spanish — arrive, carving up South America as though it didn’t already have a local population. European forces squabble over who controls what. Napoleon’s power politics back in France affect who is in charge of Spain, further affecting who is in charge of Argentina. The British have control of Buenos Aires for a short time, too. In typical colonial fashion, foreign powers exploit everything they can get their hands on: natural resources, people — until the people revolt. This is wildly oversimplified, but you get the gist.

The revolutionaries are a mixed bag of creoles (people of mixed Spanish and aboriginal descent) native born Argentineans, and gauchos. These Argentine cowboys existed before the Argentine War for Independence, but a postwar epic poem by Jose Hernandez, El Gaucho Martin Fierro, cemented their place as an icon of Argentine culture. Pressed into service to protect Spanish holdings, Martin Fierro bolts and has a series of heroic and violent adventures, siding with the natives — and becomes an icon for the new Argentina.

So, who are the gauchos? They’re free-range cowboys, living on the prairie, herding cattle, bonded on a not quite molecular level with their horses, living on a diet of yerba mate and beef. Strong, silent, tough, and willing to defend themselves with a facón — a long heavy knife stowed in the gaucho’s sash. Yes, there are still gauchos, nearly 150,000 of them (according to National Geographic) though the consolidation of once-wild lands into giant estates means that the borderless gaucho is likely to have an employer who sees him more as a ranch hand than a rebel. (Or so he hopes.)

There’s a rich mine of 19th century Romantic gaucho literature; Jose Hernandez wasn’t the only writer who devoted himself to the topic. Much of it focuses on the conflict between European cultural forces and the country life of the gauchos. The stories serve as a parallel to the story of Argentine independence: fiercely rugged men of the land saying no to the colonial powers attempting to rein them in.

But there’s a more modern veneration of the gaucho too. In Mercedes, Salta, and Buenos Aires, there are shrines to Gauchito Gil, a Robin Hood-like character who’s said to have stolen from the rich and given the spoils to the poor — and who performed healing miracles. Locals leave offerings to Gauchito Gil — candles, crosses, and red flags (the colour associated with Gil) — in exchange for his intercession in their woes.

Vendors sell icons and other objects associated with Gil, there’s an annual festival to his memory, and you may see him appear in Buenos Aires graffiti. There’s a whole movement to make Gauchito Gil a saint, even while questions remain about his existence. Maybe he wasn’t even a real person, but maybe it doesn’t matter. What matters is that the story of the gaucho is alive and well, on horseback, under wide prairie skies.

I have roamed as free as the winging bird,

And many a heart my song has stirred,

But my couch is the clover of the plain,

With the shining stars above.

G Adventures runs a number of departures in Argentina encompassing a wide range of departure dates and activities to cater to different tastes. We’re thrilled at the prospect of showing you this big blue planet of ours — check out our small group trips here.