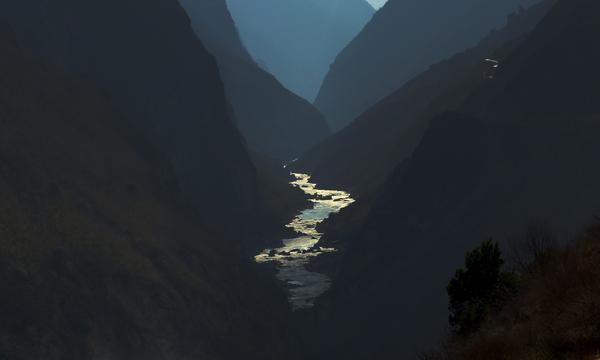 Everything you need to know about China's Tiger Leaping Gorge

The UNESCO Heritage Site is an ideal destination for hikers, outdoor enthusiasts and history buffs alike

Tiger Leaping Gorge sounds like a fictional location from a Disney movie. But for travellers who have hiked its steep limestone ridges and vertiginous cliffs, it’s every bit as real and deserving of its name as the Forbidden City in Beijing or the Great Wall of China

Located just 60km (37 mi) north of Lijiang in Yunnan, this dramatic gorge is carved out by the Jinsha River, a tributary of the massive Yangtze River. Featuring turquoise waterways and lime-green rice terraces, Tiger Leaping Gorge is one of the most stunning landscapes anywhere in China.

Since opening its doors to foreign tourists (officially) in 1993, the gorge has drawn thousands of adventure seekers who want to experience a bit of rural China. From the small town of Qiaotao, visitors can easily explore the Tiger Leaping Gorge through a multi-day trek that comprises hiking steep hills, sleeping in Nepalese-style guest houses, and waking up to impressive views each morning.

For those thinking of a visit to Tiger Leaping Gorge, here’s a bit more background on the amazing landscape.

1. There’s a story behind the name

The gorge gets its poetic name from a legend that involves — perhaps unsurprisingly — a tiger and a hunter. According to the tale, the hunter chased the tiger through the gorge until they reached the narrowest point. The tiger found itself trapped between the hunter and the rushing river at the base of the gorge. Left with no choice, the tiger leapt the 25m (82 ft) gap across the gorge, escaping the hunter. Today, the rock from which the legendary tiger made its jump is an iconic viewing point.

The valley forms part of a UNESCO natural preservation area called the Three Parallel Rivers World Heritage site. Because this is the meeting point of several ecological and climate zones, it is called an “ecological hotspot” due to its unusually large number of different plant and animal species living in the same region.

3. You can walk the entire length of the gorge

The gorge runs 16km (10 mi), and hiking the entire length of it is possible along two separate trails. The lower of the two is a paved road at the bottom of the canyon that runs along the river, and is popular with Chinese tourists who want to see the gorge on tour buses rather than on foot.

The high trail — which mainly sits at an elevation of 2,700m (8,858 ft) — is a marked hiking trail that features a number of guesthouses (should you choose not to walk the entire trail in one day). The trail is considered one of China’s best hikes. It rarely gets crowded with tourists or locals, so expect to find plenty of peace and solitude.

Tiger Leaping Gorge is inhabited by the indigenous Naxi people, who live in tiny enclaves scattered throughout the area. Descended from Tibetan nomads who settled in the Yangtze valleys centuries ago, they are a proud minority group who have kept many of their old traditions alive. Some of them still practice a matriarchal system, which was vigorously but not completely eradicated during the Communist era. Most Naxi people still practice the Dongba Jiao religion, believing that everything has spirits and that those spirits can never die.

5. The gorge was saved when the government shut down its hydroelectric dam project

Despite being an UNESCO World Heritage area, the gorge would have been flooded if the Chinese government’s proposed plans to build a controversial dam across the Yangtze River in 2003 were enacted. The dam would have stopped the flow of the upper Yangtze River, and forever altered the landscape of the Tiger Leaping Gorge. It would have also forced the relocation of 100,000 Naxi residents to a Tibetan area with a harsh climate and unfamiliar crops. Thanks to protests by environmental activists in China, the project was shut down in 2007.

G Adventures runs a number of tours to China, comprising urban excursions and rural retreats — including a few to Tiger Leaping Gorge. We're excited at the prospect of showing you more of this big, beautiful planet — check out our small group tours to China here.