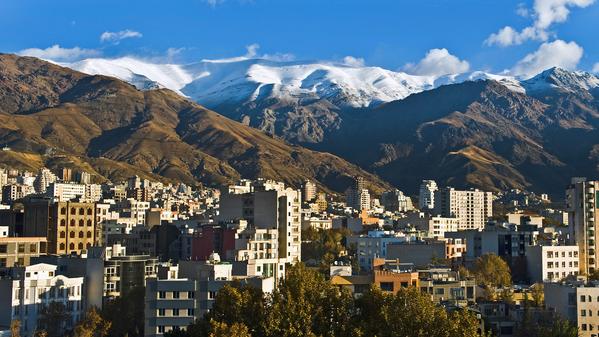 Eating Your Way Through Iran

Wanderers-in-Residence Dan and Audrey take a bite out of Persian cuisine. And with a mix of savory dishes and sweet flavours, we're willing to guarantee a craving.

by Daniel Noll and Audrey Scott Posted on 05 August 2013

The first few times someone takes you out to eat in Iran you might think the entire country is kebab-powered. It is true that kebabs are said to have originated in Iran and people do indeed love them, but there’s so much more to Iranian cuisine than grilled, skewered meat.

Traditional Iranian – or Persian – cuisine combines savory dishes with sweet flavours like pomegranate, barberry and cinnamon. There is ample use of fresh herbs and subtle spices like saffron. The goal is not to knock your taste buds over with one prominent taste, but to serve up layers of flavor to keep you guessing as to what may come next.

Here are a few of our favorite Iranian dishes that we found in the weeks we traveled across Iran.

Note: Vegetarianism is not a concept that most Iranians understand well.Restaurants would often pluck out the chunks of meat from stews and call that a vegetarian meal. If you are a vegetarian, consider learning the names of a few key vegetarian dishes so that you are able to specifically request them.

Kebabs are taken very seriously in Iran – so seriously that the kebab menu alone may run a full page and feature every style and cut of meat that could imaginably be skewered and grilled. Lamb – in chunks or minced – is most popular. Often, kebabs are served with onions, grilled tomatoes and a bit of lavash (flat bread) or rice.

Our favorite: kebab koobideh, minced lamb mixed with herbs. One order is usually more than enough for two people to share.

After kebabs, stews are the most common dishes you’ll find at local restaurants inIran. Most often, khoresht will feature some sort of vegetable mixture (e.g., lentils,spinach with beans, tomato and eggplant) with a bit of meat thrown in. Khoresht isoften served with rice and serves as a comfort food, which is to say hearty and filling.

This famous Iranian stew features a bit of tart, sweet and savory and is made from pomegranate juice and ground walnuts mixed with chicken (or some other meat). Itcan be difficult to find in restaurants as it is usually reserved only for specialoccasions. Keep asking around, however, and eventually you’ll find it. It’s definitelyworth the effort.

Dizi is primarily a mountain dish. It features a thick stew made from lamb,chickpeas, onions, potatoes, tomatoes, turmeric and is often cooked in a heavy ceramic pot where the liquid is then strained away and served in a bowl on the side.As a get-involved sort of bonus, you’re given a pestle-type instrument to crush thebits. Enjoy with a bit of the broth dipped with some flat bread.

Köfte, a Turkish specialty, can be found in the northwestern part of Iran, the provincial capital of which is the city of Tabriz. A large köfte (like a big meatball made from either minced meat and spices or a vegetarian version featuring barley and spices) is served on flatbread with a selection of greens and herbs. After all those kebabs, köfte strikes the body as refreshing as it’s loaded with an array of herbs, spices and flavor.

Iranian tea rooms are hubs of social gathering. In Iran, it’s not just about drinking tea, but about lounging back on cushions on the ground and spending hours whiling-away with your friends and colleagues. Tea houses will also often provide qalyan, bigwater pipes , like hookah, in which you can smoke sweet-flavored tobacco (thinkvanilla, apple, orange, etc.).

Typically, black tea is served with crystalized raw sugar on a stick. Stir your tea withit and watch the sugar crystals melt away. Like a magic wand. Delicious and fun.

Although Iran is a dry country, every restaurant feature a listing of Iranian beer…meaning non-alcoholic, fruit beer. These come in all different flavors, with our favorite being pomegranate. Once you get over the fact that what you are drinking really isn’t beer, you might actually find it refreshing.

Doogh is a chilled thin plain yogurt drink, often served with dried mint or other herbs on top. Surprisingly refreshing on a hot day and a perfect complement to meat-heavy meals like kebabs.

Some people claim that ice cream originated in Iran during the rise of the Persian Empire thousands of years ago. Now we’re not here to confirm or dispute that fact, but ice cream is very popular across Iran. It’s often hand-made in flavors like saffron or pistachio. Iranian ice cream is not nearly as creamy as an Italian gelato, but it’s still an experience.

These cookies are not the easiest to find. However, should you find them, you’d be well served to buy kilos of them to take with you. Nokhodchi are made from ground chickpeas and a combination of sweet spices. The result: a flavor sensation that just melts in your mouth.