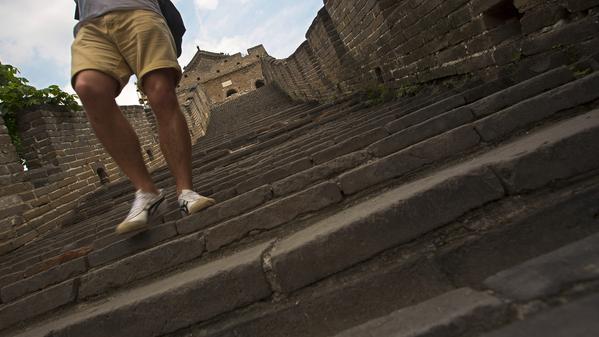 Eat it up, walk it off

We’ve all been there. You go overseas, you eat, you drink, you make merry and then you avoid anything that resembles tight-fitting clothing for the weeks following your return home.

Sullen grey clouds crown the mountain peaks. The surface of the turquoise lagoon is broken by a powerful wind that pushes water spray onto the shore. A group of hikers stand wearily, hoping for a break in the weather. Thin beams of sunlight steal through the cloud cover and illuminate in pink the three granite pillars of Las Torres and suddenly all of the blisters, the broken night's sleep camping are all made worthwhile.

Put simply, Patagonia is pleasing to the eye. Not only is the area around the Torres del Paine National Park home to some of the most ruggedly beautiful works of nature in the world, it is also the perfect place to stretch your legs and tackle some of the 130km (80 mi) hiking route that twists its way through the region.

Following a week of hiking and living off basic camping fare, stomachs are sure to rumble. Luckily Argentina has some of the best steak houses, or parilladas, around. Known for cooking a range of meats over large open fire grills, parilladas often serve up food in a buffet format whereby you can simply point to what looks good on the grill and the chefs will book you on a one-way train to red-meat overload.

Volcanoes and glaciers in Iceland

Against a backdrop of wild, uninhabitable landscapes — and poorly recreated Game of Thrones (GOT) fan-scenes — Iceland is fast becoming one of the world’s most popular travel destinations. However, while the country may house many recognizable filming locations, Iceland is distinctly different than the acclaimed HBO program; including having developed a local dating app to ensure that Icelandic couples are not related – something GOT’s “Lannister” family obviously forgot to download.

With little more than 300,000 people, Iceland is Europe’s most sparsely populated nation, leaving plenty of room for uninterrupted views of the country’s numerous waterfalls, polar ice flows, and the spectacular aurora borealis.

Those looking to work up a sweat in a country that rarely sees short-sleeve weather can take to the numerous hiking trails that snake out into the lush green summer landscape. Travellers looking to immerse themselves in nature should take a seven-day trek through Iceland’s backcountry, setting up camp behind mountains and soaking in the odd thermal hot spring. This once-in-a-lifetime trek, traversing Iceland’s mountains and valleys for an average of six hours a day, could burn off some serious calories, leaving plenty of room for hangikjöt, a traditional festive dish of a smoked leg of lamb. Much better that than having to feast on a meal of hrútspungar, which is basically just pickled ram’s testicles.

While often pictured as some kind of snow-capped wonderland, in the summer months the Dolomite Mountains are a lure for active adventurers from around the world. Part of the Italian Alps, the Dolomites are home to 18 mountain peaks, which rise to above 3,000m (9,842 ft). The region's vertical walls, sheers cliffs, and narrow, deep and long valleys are perfect for mountain climbing, and hiking.

After a day out in the Dolomites, take your taste buds on a culinary journey and sample dishes from the local Ladin people who, with their own distinct culture and language, have inhabited the region for generations. Such traditional Ladin dishes as tutres (spinach, cheese or sauerkraut pancakes) or canederli (bread dumplings) are made with local ingredients from recipes that have been used for centuries.

The Great Wall of China

While for many people, “I’m going for a walk” is something most closely associated with what your gassy uncle says after a big meal; lacing up a pair of shoes for one of the longest and most spectacular walking paths in history is an experience not to be missed. The Great Wall of China has been standing for centuries and is not only one of the world’s most culturally significant structures today, but a great place to burn off some calories while taking in the best of ancient Chinese engineering.

The entire wall is 21,000km (13,048 mi) in length, so unless you are a training to be an Olympic-level long distance power walker, you might want to focus on a smaller part. Walking the wall for just a week, as you take in the Mutianyu, Gubeikou, and Jinshanling sections, will give trekkers a first-hand experience of the sheer scale of the structure and offer insights into the lives of villagers who have grown up in the shadows of the Great Wall. Of course, after the day's activities, you must head out to feast on locally made dumplings, such as the pan fried da lian huo shao!