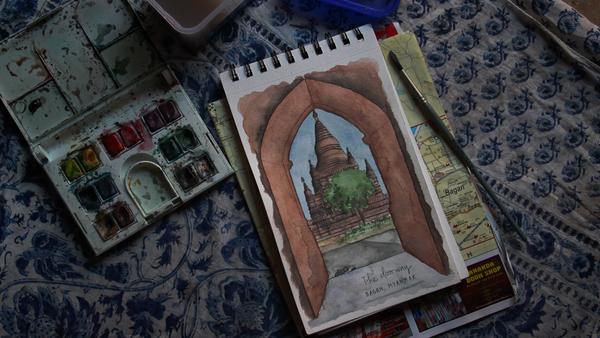 Travel blogger and artist Candace Rose Rardon puts down her backpack and picks up a sketchbook to connect with people on her travels.

It’s a brisk spring afternoon in Paris and I’m sitting in front of the Shakespeare and Company bookstore with my sketchbook open on my lap.

I’ve spent the last several hours trying to capture the scene with pen and watercolours, staying motionless amidst the never-ending stream of visitors paying homage to the iconic bookshop. The air is filled with francophone accents. Families follow after each other and students snap selfies, one guy flicking a finger as he says, “Shakespeare and Co., check!”

But for the most part, I’ve sat mostly on my own, not feeling as if I’ve found a personal connection here — that is, until I feel a presence standing over me. I look up and am greeted by a Frenchman with an elegant silk scarf knotted around his neck. He tells me his name is Pierro, points to my sketch, and says, “I do the same.”

Before I can ask what he means, Pierro sits down beside me and pulls a familiar black sketchbook from his bag. Immediately, we exchange books. As he looks through my sketches and I through his, I’m swiftly taken with his style — his loose lines give each scene a visceral sense of movement — and with the spectrum of subjects he’s chosen to draw; from his leafy back garden to the interior of the van that he rides in as a police officer.

By the time Pierro and I part ways, our brief encounter has transformed the connection I feel with Paris through the simple interaction of making a new friend, hearing his story and most significantly, finding common ground through a shared passion.

I love sketching when I travel for a number of reasons. It helps me pay greater attention to the world around me — to be fully present in each place I’m visiting — and it often leads me to connect with people, both with locals and travellers alike.

But of all the people that sketching enables me to connect with, the ones I always treasure spending time with the most are fellow artists. Meeting Pierro in Paris was not the first time this has happened.

Last year I sat sketching in Athens, sprawled out on a gravel path near the Ancient Agora. As I tried to capture the vista over the Temple of Hephaestus — the sky a rich shade of sunset orange, the horizon pierced by the pointy tips of cypress trees — a woman named Elena introduced herself and told me that she was an artist. As we were chatting, another man walked up, whom I later learned was named Antonis, and said that he too was a painter and an art teacher.

Elena and Antonis began talking very intensely in Greek, of which I understood not a word, when Antonis suddenly picked up my sketchbook, flipped it open to a new page, and began to sketch my portrait. I was awkward and self-conscious at first, so used to pointing my pencil outward at the world and unsure of how to react with its focus turned on me.

Soon, though, I started to relax, as I realized something. Antonis and I didn’t share a language; here then, on the pages of my sketchbook, was the record of our connection, a conversation carried out not through words but art.

But these serendipitous encounters don’t just happen in Europe. I’ve also met local artists on the sidewalks of Saigon, by the beautiful red-brick pagodas of Bagan, Myanmar (which is also known as Burma) and in a sleepy beachside village called El Zonte in El Salvador.

Each time, the encounter begins much as it did with Pierro in Paris. Someone will approach me while I’m sketching, pull out their sketchbook or phone to show me photos of their art, and say some variation of, “We have same hobby,” or, “I do like you with watercolour.” And each time, as my new friends then invite me to a lunch of Hanoi-style phở, or share information about the Burmese sand painting traditions their grandfather taught them when they were children, I understand their culture a little more deeply.

Because this is what I’ve discovered through nearly five years of travel sketching: passion is a magnet, and when we engage with the activities and hobbies we love as we travel, it draws people to us who relate to our passions. It’s more than just like attracts like. I believe it’s the joy of recognizing a part of ourselves in someone who might be very different from us on the surface.

We may have been raised in different cultures, call different countries home, and speak different mother tongues, but still we’re drawn to connect, pulled together by the power of our shared passions and similar hobbies.

G Adventures runs a number of departures encompassing a wide range of departure dates and activities to cater for different tastes. We’re thrilled at the prospect of showing you this big blue planet of ours — check out our small group trips here.