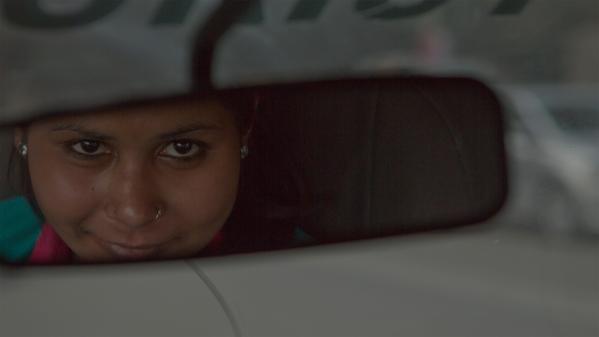 Disruptive Innovation: Women on the Road in Delhi

G Adventures' very own Oana Dragan takes to the streets of Delhi where local women are ensuring the safe transfer of women travelling with G Adventures from airport to hotel.

It all started at Indira Gandhi International with one very different type of airport "connection".

This wasn’t my first time in India — but it was the first I’d had a female driver. While female cab drivers are an uncommon sight in my hometown of Toronto, they are even more so in Delhi. Here, the traffic is among the worst I’ve experienced. Cars not only jockey for position along growling trucks and rattling rickshaws — but also cows, horses, dogs and even, sometimes, elephants. It can be pretty intimidating — especially for those arriving in India for the first time.

As a solo female traveller, the prospect of travelling to India has always been met with overwhelming excitement and admittedly, a little bit of fear. And I can feel its familiar tug the moment I pass through immigration and make my way out into Delhi’s manic bustle. Will there be someone waiting for me? Can I trust the person picking me up? Has there been a transfer mix-up? Will I be left stranded? Will they be able to find my hotel?

My relief was palpable the moment I was greeted by Shanti, my driver. A quiet woman who projected an aura of confidence, she smiled warmly and grabbed my luggage on our way to her car. I enjoyed getting to know a little bit about her as she navigated Delhi’s side streets to my hotel. Confident and careful, she put me at ease and I felt the fear subside, replaced again with the anticipation of exploring India.

In Delhi, Shanti’s profession is a pretty unlikely one. Many underprivileged women and girls here are marginalized and underserved. When a family faces hard times, young women are often first to be pulled from school to help out; therefore, they’re less likely to finish their education compared with their male siblings. Under educated, these young women become dependent on their partners and husbands to provide for them, which places severe restrictions on their independence. Put simply, they are not afforded the same opportunities as their brothers.

Shanti’s job as a commercial chauffeur was made possible by Planeterra’s Women on Wheels project, a collaboration between G Adventures and the Azad Foundation. The Women on Wheels project provides job opportunities for women, empowering them while providing safe transportation options for women travelling on their own with G Adventures. In turn, G Adventures and Planeterra help the Azad Foundation increase the number of women it serves both through additional vehicle purchases and a steady flow of single female travellers.

I had the opportunity to sit down with the Executive Director and Founder of the Azad Foundation, Meenu Vadera, a passionate, intelligent and kind-hearted woman who was keen to talk about her program’s success. Throughout our conversation, I was engrossed by these women’s stories — especially Shanti’s, the driver who was assigned to my transfer.

In Vadera’s words, Shanti came into the program at a very trying time in her life. She and her three daughters were the victims of an abusive husband. In order to protect them, Shanti began a frantic job search in a desperate bid to gain her independence. After several failed attempts, she found refuge in the Azad Foundation, which provided a stable job with good compensation and decent hours.

While enrolled in a Women’s Rights program offered by Azad, Shanti realized that her choices were no longer limited. She began to report her husband’s abuses to the local police, and started her very own “non-cooperation movement” in her household. Emboldened by the protection afforded her by the police and the security offered by Azad, she refused her husband anything — until, frustrated, he eventually walked out on her and her three daughters. Shanti calls it “liberation day”. The Azad Foundation hadn’t just offered to help her secure employment — they offered her independence.

Having stood up to domestic abuse, she completed her commercial chauffeur training and became a licensed driver. The only challenge that remained was landing a placement, which proved to be difficult. Discouraged, Shanti considered quitting — but the support of her peers buoyed her resolve. She found work as an apprentice and, with renewed confidence, landed her first job serving a woman who was visually impaired. It’s a job she held for over a year.

“One of the things that makes me happiest about the work we do,” recalls Meenu Vadera “is not what we have been able to do with Shanti, but what it means for her daughters.”

“Shanti’s kids now have a completely different outlook — a life free from violence, with a strong role mode who is able to provide for her family.”

Today, Shanti inspires confidence in her ability to navigate Delhi’s streets — traditionally not a place for Indian woman. Because of her resolve, she’s been afforded many opportunities — among them international travel and the chance to serve as chauffeur to some of Bollywood’s boldest and brightest. She’s become an inspiration to many of her peers — but especially to her three daughters.

When the program started in 2008, the Azad Foundation had difficulty cultivating interest in the service. Today, however, corporations are lining up to employ woman drivers. At the outset, it was difficult to convince women to enroll but the success of women like Shanti has convinced other women to step out of the shadows of abuse. Vadera calls this “disruptive innovation” as it continues to provoke the status quo both on the road and in the home. Indeed, the Azad Foundation, in partnership with G Adventures and Planeterra, has proved that Delhi’s roads are indeed a place for women.

G Adventures runs a number of departures in India encompassing a wide range of departure dates and activities to cater to different tastes. We’re thrilled at the prospect of showing you this big blue planet of ours — check out our small group trips here.