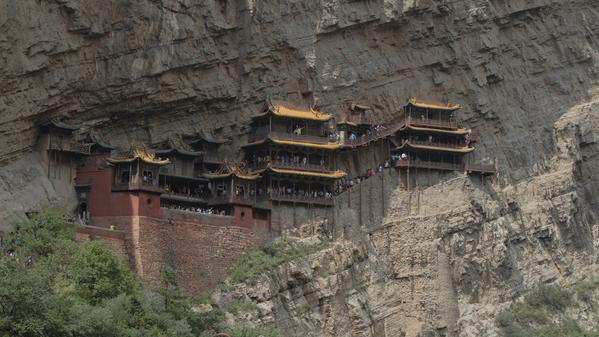 Travel writer Waheeda Harris takes us out of the typical Chinese metropolis and straight to Datong where incredible history lives.

When I thought of visiting China, my first thoughts were about seeing the two biggest cities Shanghai and Beijing. I was fascinated by their mix of history and modernity and by the opportunity to see cities that, being larger than many countries, were the source of so many iconic images. But after travelling on the inaugural Hidden China & Inner Mongolia trip, I would advise anyone to go beyond the metropolises, like to the city of Datong, which should be included on any top-10 list for travellers visiting the People’s Republic of China.

Located in the northern area of Shanxi province, Datong was founded in 200 BC. Now a bustling city of just over three million, this industrial city sits on the edge of Inner Mongolia’s grasslands. So why make the trek here? The city is the gateway to two unique sites – the Yungang Grottoes and the Xuankong Temple – both which will tap into your inner Indiana Jones.

Visitors walk through extensive grounds of the grottoes, including a reconstructed temple, before arriving at the hillside containing more than 50,000 carvings of Buddha. From life-size to multiple storeys, UNESCO described this World Heritage site as “a masterpiece of early Chinese Buddhist cave art.” Carved by local artisans, these images of Buddha, which date back to the 5th and 6th centuries, are massive, inspiring, ancient, and memorable.

The Xuankong Temple aka the Hanging Temple or Hanging Monastery is found overhanging a lush a river valley, near Mount Heng. Standing below, it seems improbable to have a temple built into the side of a mountain, but it was somehow conceived and completed 1500 years ago by a monk, Liao Ran.

As I ascended via staircases to the entry of the temple, I felt like I had walked into the footsteps of the monk. Here I was, happy to overlook the valley from 75 metres above, surrounded by the influences of China’s three faiths: Confucianism, Taoism and Buddhism, all graphically present on the temple.

There is a stillness found within each room, perhaps from the years of prayers repeated by the devoted residents, or maybe because of their absence. Following the trail of narrow passageways and staircases throughout the three levels of the temple, it’s easy to imagine a saffron robed man appearing around the next corner, ushering the faithful to prayer.

Visiting these two sites in one day I had been given a rare experience for travellers – just as precious to me as the numerous Chinese visitors, and a taste of being a western explorer. It was an experience I had thought would be elusive in the 21st century. I was happily mistaken.

Waheeda travelled on the G Adventures Hidden China & Inner Mongolia tour. We’re thrilled at the prospect of showing you this big blue planet of ours — check out our small group trips here.