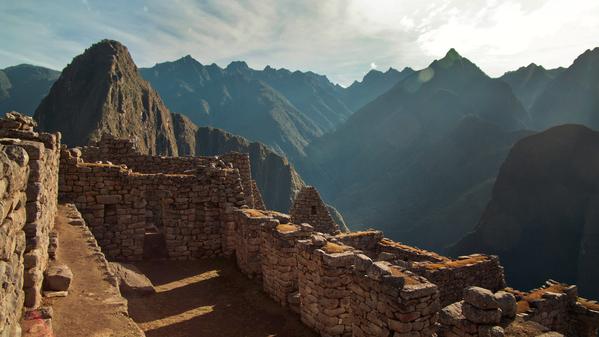 Climb to the Sky: Trekking Lares

Follow in the footsteps of the ancient Incas along with travel writer Michael Turtle as he tackles Peru’s Lares Trek.

The first surprise of the evening comes just a few kilometres from camp. As we approach the end of the first day’s hike, we’re a little later than groups usually are. The sun should be higher in the sky at this point, but we left late, waiting for some rain to pass.

As we walk down a dirt road, we’re joined by local farmers. They’re collecting their animals from the grazing areas and herding them back to their village. We fall into line with them, joining the procession of sheep, llamas, and alpacas. We catch odd looks from the animals but smiles from the locals. One young girl proudly shows off a newborn lamb she’s cradling in her arms.

David, our guide, doesn’t seem too worried that we’re late, although this is unusual for him. He knows the way well enough, but even he is surprised when we turn a corner and see the valley in front of us.

Animals are grazing on the grass between the small creeks that flow through the plain. Everything on the ground is already in shadow, though, because the sun is so low. But on the other side of the valley, a tall mountain stands in brightness. Most of it is bare rock with no plants visible. But a large white glacier has cut down one side of it. The ice sparkles in the sunlight and the rock glows a warm contrasting orange. We all stop. David takes out his phone and takes a photo. Even a guide who has done this trek so many times can find something new and amazing each time on the Lares Trek.

While most people who arrive in Cusco with plans to walk to Machu Picchu take the traditional Inca Trail, the Lares Trek offers something very different – and very special. It takes a completely different route away from the majority of trekkers, winding through more dramatic scenery and local communities. (It doesn’t arrive at Machu Picchu directly, though, so you need to take a train and a bus to arrive there on the final day.)

On this first evening, though, as we cross the grassy plain, dodging horses and llamas, that still seems a long way ahead of us. Tonight we’re camping near the village with the mountain keeping watch over us.

Most of the treks in this region set up tents wherever it’s most convenient – near rivers or flat areas sheltered from the wind by trees. That’s what we’ll do tomorrow, but tonight is a relative luxury. The same community that had earlier been herding its animals back to the village runs a small campsite at which we’ll be staying.

The village, it turns out, is called Cuncani and the people here have developed the campsite with the financial help of G Adventures. After it became economically sustainable and begun to provide a profit for the local people, G Adventures left them to it and the community now owns and manages the campsite itself. In return for a few dollars for each person who stays, the local community provides a hall to use for cooking and dining, clean toilets, showers, and space to pitch tents. It opened in early 2014 and is Peru’s first community-owned ecological campsite.

[Editor’s note: The campsite Michael visited is the result of a partnership between Planeterra, G Adventures’ non-profit foundation, and the Multilateral Investment Fund to help local communities benefit from travellers exploring the Sacred Valley. Go here to learn more.]

The idea of a shower particularly appeals to me, but I am arrogant. The water is warmed using solar power, and I’m advised to shower in the evening because the water gets cold by morning. I ignore the advice and get up in the morning, towel in hand, and head for the showers. Standing naked inside the cubicle, I turn the taps and get is a blast of cold. I begin to shiver. It’s then that I notice my feet feel a bit funny and I look down. The bottom of the cubicle is covered in ice.

Still, perhaps it’s a good step towards acclimatization – there’s a big day ahead.

Today’s hike takes us up 4,800m (15,748 ft). The air is cold and thin, and breathing is difficult at times. But the views are incredible and we walk through changing landscapes from an altitude few ever experience… but it’s still a hard day of trekking. Come to think of it, I’m glad I had that shower!

Want to get Active? Whether you’re eager to see what you’re made of or merely want to see some of the world’s great vantage points for yourself, we’ve got you covered.  G Adventures runs a number of departures on the Lares Trek. We’re thrilled at the prospect of showing you Peru as you’ve never seen it — check out our small group trips here.