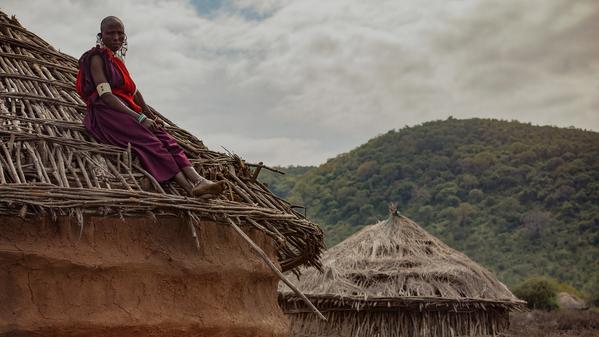 Award-winning travel writers and advocates of sustainable tourism Daniel Noll & Audrey Scott visit a G Adventures–supported project in Tanzania and learn how a simple, cheap, and seemingly ordinary device can make a huge difference to the health and quality of life of families that use it.

by Daniel Noll and Audrey Scott Posted on 19 August 2014

“Let me know when you can’t take it any more and we can leave,” Kisioki advised. We were in Maasai village near Arusha, Tanzania, about to enter a family hut. Though I nodded in agreement, I thought his offer was a bit extreme considering we were going where a family of eight lived. I ducked my head and followed him in.

In retrospect, I really wasn’t prepared for what came next.

Once we turned a slight corner to enter the hut’s central room, my eyes, nose, and lungs were accosted by acrid smoke. Within seconds, I experienced difficulty seeing and was labouring to breathe. I blinked repeatedly, trying to clear the soot from my eyes and find some relief from the sting. Not wishing to be rude to our host who had very kindly invited us into her home as she made porridge for her family, I tried to suppress my coughing.

After a few minutes, my body adjusted to the smoke and I was able to bear the environment. Kisioki, the local coordinator for the Maasai Clean Cookstoves Project, kindly translated for us. Nagoyoneeni, our host, showed us her traditional Maasai stove: the so-called “three-stone” fire, a basic open pit surrounded by three stones with a ledge upon which to fit a pot.

As I listened to Kisioki, I imagined my lungs blackening by the minute. This really can’t be good for me. And I’m only here for five minutes. I tried to imagine what it’s like to live with this, what the smoke must do to a woman who cooks at the stove all day, let alone what it does to the fragile system of the newborn at her side.

The difference a simple stove can make

Only fifteen minutes before, we were in the hut of a neighbouring woman named Mela. She had a “clean cookstove”—one that she used to boil a pot of water at the time—that permits the hut’s inhabitants the underrated pleasure of relatively uninhibited breathing.

Inside the central room, we enjoyed a long conversation, taking photos and sharing stories, and just hanging out. No coughing, no stinging eyes, no soot covering the walls, no visible smoke enveloping us.

Often, when we talk about “changing lives,” it’s tempting to imagine something complicated and expensive. And here was a simple little device—a stove that costs around $55 to build locally—makes an immediately apparent yet almost inexplicable difference.

This project, sponsored by G Adventures and Planeterra, is not only changing lives, but very likely saving them. Smoke inhalation from traditional stoves can cause cancer, pneumonia, heart and lung disease, and blindness. Children are particularly susceptible to these health problems as their immune systems have yet to fully develop.

As we continued talking with Kisioki, we began to realize that the clean stoves project didn’t only yield obvious health benefits. It also positively impacted the local environment and economy, and the self-esteem of the women involved.

First, the environmental impact. Because of a clean stove’s efficient design and use of a chimney, it consumes only 40% of the firewood used by a traditional three-stone Maasai stove. This positively contributes to a local slow-down of deforestation, a process which otherwise advances unchecked across much of Africa. The project actually contributes to reforestation, now planting new trees for each clean stove installed.

Additionally, mothers and their children don’t need to make the two-hours-plus walk to fetch firewood from nearby forests as often as they used to. This not only saves time, but also reduces their exposure to dangers like wild animals in the bush and vehicles on the road.

The women’s empowerment component of this initiative—something unique compared to other clean stoves projects around the world—is also something worth learning from and emulating.

“Why did this project include a women’s empowerment as a core component?” I asked Kisioki.

He flashed one of his big smiles and laughed, “It was an accident. What happened was this...”

When the Maasai women first saw a sample clean stove brought to them from a similar project in Zanzibar, they told the organizers it wouldn’t work for their needs and style of cooking. From there, it took nearly 18 months of engineer-designers working together with local women to produce a clean stove they would actually use.

Each time the engineers made an adjustment, a group of Maasai women would test the new stove and provide feedback. Together, they patiently continued this iteration until the design was perfect. Throughout this time, whatever little interest the Maasai men had at the beginning was lost, and they stopped participating and going to meetings.

When the hard work of the clean stove design was finished, the Maasai men wanted to get involved in installing the stoves, for there was a bit of money to be earned. As Kisioki tells it, the women didn’t want any of that. They were the ones committed throughout the entire process—they owned it—and therefore they felt they ought to be responsible for stove installation and management.

And so they were.

The project organizers held community meetings in local villages, and the villagers selected the first ten women to be trained in start-to-finish clean stove installation. These women not only received training and developed new skills, but they also had an opportunity to earn money, something that has often proved difficult for women in traditional Maasai communities.

We had a chance to see a bit of this in action. When we arrived at the next village, the leader of the installation team, a woman named Esupat, sat on the roof of a hut, legs straddling a chimney she built with bricks and secured with basic concrete. She introduced herself in English and flashed us a big smile. You could tell she was a natural leader.

Esupat was one of the original women trained by the program. In five years, she has installed over 300 stoves in villages across the region. Because of her expertise, she was chosen to go to Uganda to teach the stove installation process to indigenous Twa women in the Bwindi Impenetrable Forest area. In order to get there, however, she had to fly in an airplane, something that no one in her community had ever done before, men included. After taking the flight, she returned home with an elevated social status. Her new local nickname, one she embraces proudly, is “Airport.”

The installation team included five women, each one performing a specific role in line with her expertise. It was impressive to watch them work together to complete the stove installation—including building a chimney from small bricks—in just a few hours.

And to think, there are installations like this taking place every day throughout the region.

In the five years of the Maasai Stoves and Solar Project, over 1,000 stoves have been installed in Maasai villages across the region. When you consider the average size of a Maasai family including six to nine children, that’s a remarkable amount of people whose quality of life and health have been transformed.

And it’s really only just getting started; through the project’s new partnership with the Planetaria Foundation, the impact will grow significantly as select G Adventures tours exploring the Serengeti will contribute a portion of the tour fees to buy a clean stove for a Maasai family in the area. Additionally, the tour group will also have the opportunity to visit the Maasai village to see a clean stove installation in action, just like we did, and to learn about the importance of this simple device to the lives of the people who use it.

G Adventures runs a number of departures in Tanzania encompassing a wide range of departure dates and activities to cater to different tastes. We’re thrilled at the prospect of showing you this big blue planet of ours — check out our small group trips here.