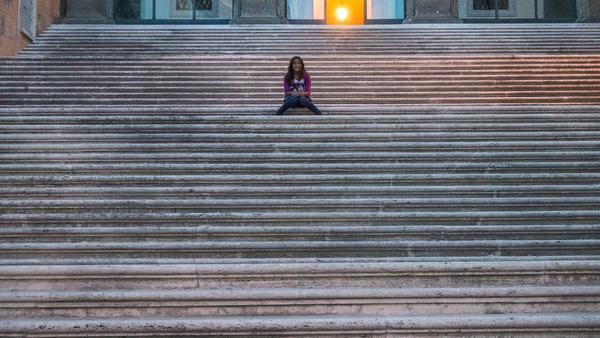 Childlike Wonder: Rome through the eyes of my kids

I love seeing the world through the eyes of my children, and my recent travel to Rome was no exception. At 14 and eight years old, their ages help me appreciate Italy’s capital city in a different way. My normal routine is to take in the sights and try to photograph them, often quite quickly and skipping over actually experiencing what I am seeing. But travelling with kids (and family travel in general) requires a different pace; one that has led me to a deeper appreciation of a place.

For one thing, kids see things from a different perspective — sometimes it’s two feet lower than what I’m used to. Plus, children’s minds tend to be more open and that leads to a lack of expectations with greater curiosity, as they don’t have all the answers like adults tend to believe we do.

My kids’ experience in Rome led me to love the city more than I might have if I were travelling without them. Here’s how their take on the world helped shape how I saw it.

I love grand architecture but wasn’t expecting the kids to, especially after the long walk through the Vatican museums. After all, it took them about a minute in the Sistine Chapel before they had had enough. I couldn’t imagine an even larger display of beauty captivating their interest.

When I look back at the time stamps of pictures when we entered and left the Basilica, we spent a solid 50 minutes wandering the vast open areas. For both of them it was also a good education on Christianity from the heart of one of the branches. They both said the largeness of the place and all the ornate decorations filled their interests.

Because of where our hotel was located, we passed through the grounds of the Capitoline Museums a number of times before we went inside. Picking museums with both parents and kids in mind is always a balancing act for me. I want to get in-depth with some subjects that I know would bore my kids, while I also want to help them catch the “history bug” and learn from the past.

The Musei Capitolini had the right mix of Roman, Greek and Egyptian artifacts to make the visit a success. It helped that some floors were partially underground and thus much cooler than the summer air of Southern Italy. The museum literature also comes with a scavenger hunt for particular pieces of art that is perfect for kids of all ages. They might not spend 10 minutes at each piece, truly contemplating what the artist is trying to convey, but they are becoming familiar with historical styles and periods in a way that’s better than any textbook can convey.

Parenting Tip: When kids grow bored of museums (and they almost always will), hand them a camera and let them go to town. Our eight-year-old was melting from the had lost interest, but when she started to take photos everything changed and we had to drag her away from exhibits.

Let’s face it, kids are weird. And you are never sure what will tickle their fancy. In this case, our teenager was soon gravitating to the displays of the dead in various spots throughout Rome; from the saints in St. Peter’s Basilica to Raphael’s dark tomb in the Pantheon. Had I known about this sooner we could have made more effort to take the Crypts & Catacomb tours offered by various groups.

Rome is the resting place for many interesting figures of past. This can be a great conversation starter about the varied history to be found everywhere in the city.

How can you go wrong with kids and gelato? Food is an important part of travel (especially so in Italy), and we encourage our kids to try new things. It is always good to have the fallback of gelato if food experiments go awry. If you visit Rome in the summer, I’d almost consider gelato to be a survival tool!

I love walking a city as it gives a better feel of the pulse of the people. In one day we managed to cover more than 16km (10 mi) and while the kids were champs most of the time, they preferred the guided bus tours.

Not only did the bus tour give us a chance to put up our feet up while getting from A to B, it also informed the kids with the onboard audio program in multiple languages. I thought the buses would be campy or hokey, but I was pleasantly surprised to find out how much we all learned while taking the bus. Plus, they are a great way to get a first glimpse of the city without getting too lost.

Night markets on the river

Nighttime will be a hit with your kids in the summer because the temperatures will hover around… perfect. Add to that the fun of being along the River Tiber with many merchants in their pop-up tents and the nightlife that ensues, and you will likely find your children asking you to stay up late.

Whether with an iPhone, a point-and-shoot or a much larger camera, I find that letting kids play with images was a great way to see the world through their eyes. It is a privilege that needs to be monitored, though, as too much looking at the screen means less time actually experiencing the sights.

Rome is a great introduction not only to Europe but to travel in general for your children. It has a lot to offer kids while not having to go to the extreme of only visiting kids-specific sites and museums. Have you travelled with your children in Rome? Let us know how it went in the comments below!

G Adventures runs a number of departures in Italy encompassing a wide range of departure dates and activities to cater to different tastes. We’re thrilled at the prospect of showing you this big blue planet of ours — check out our small group trips here.