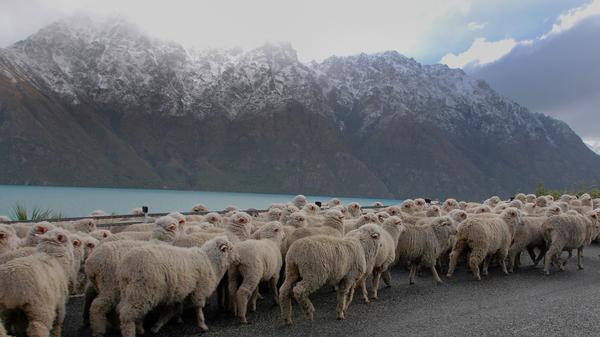 There’s no creature more emblematic of New Zealand than the humble, utilitarian, and ubiquitous sheep.

England has the bulldog. America has the eagle. Canada has the noble moose. New Zealand has… sheep. While the endemic kiwi bird is ostensibly the national symbol of the Land of the Long White Cloud, there’s perhaps no creature more emblematic of New Zealand than the humble, utilitarian, and ubiquitous Ovis aries.

So, how did a land filled with wondrous beasts like whales, dolphins, bats, and skinks wind up becoming synonymous with this plain old woolly quadruped, exactly? The story is more interesting than you’d think:

James and the not-so-giant sheep

NZ’s first brush with sheep came in 1773, when Captain James Cook — the first person to circumnavigate New Zealand – imported a single ewe and ram from South Africa and turned them loose on the South Island at Queen Charlotte Sound. While initially a failure (both sheep were dead within days), Cook’s experiment spurred perhaps the greatest economic boom in NZ’s history; by the 1850s, sheep farming was becoming one of the country’s busiest industries, with wool accounting for over a third of NZ’s total exports.

NZ had a little lamb (and then a whole lot more)

As a source of both wool and meat, the sheep’s versatility made it the logical livestock of choice for New Zealand’s first immigrant farmers. The Romney, an English breed prized both for its long wool and quality meat, adapted well to New Zealand’s wet climate and rocky landscape, and quickly emerged as the islands’ dominant strain. As sheep stations proliferated across the rolling hills of the east, the Romney was soon joined by the Corriedale, the first locally developed breed. Just how important was sheep-farming to colonial New Zealand? Since 2007, New Zealand has celebrated National Lamb Day every February 15 in order to commemorate the first shipment of frozen mutton from NZ to London.

As the sheep population of New Zealand grew, so did the global proliferation of Kiwi sheep jokes. Most of them are unprintable (ask an Australian to tell you a good one), but the most enduring jab remains the one that claims the woolly beasts outnumber the islands’ human population 20 to one. Not without a sense of humour, the number crunchers at Statistics New Zealand set out in 2011 to set the record straight once and for all. Using up-to-date population figures, they determined that the ratio had fallen dramatically over the years to a smaller-yet-still-kinda-staggering ratio of seven to one.

The hard-living sheep-shearer is as iconic a figure to New Zealand’s cultural identity as the cowboy is the to the American West. A rowdy, itinerant lot who roamed from station to station in search of work, shearers often worked in closely-knit gangs in which each member played a specialized role. The fastest shearers – known as “guns” – quickly became celebrated athletes, and sheep-shearing competitions became a fixture of small-town fairs and carnivals. The legendary Raihania Rimitiriu, a Māori gun, dominated the emerging sport in the 1890s, often shearing as many as 330 sheep in a single day. Today, the annual Golden Shears Tournament stands as one of the premier events on the NZ sporting calendar.

New Zealand’s magical landscape of wild snow-capped mountains, shining lakes, and roaring rivers serves as a giant playground filled with world-class "tramping", skiing, and rafting. G Adventures runs a number of departures to New Zealand encompassing a wide range of departure dates and activities to cater for different tastes. Check out our roster of small group trips to this mesmerizing land Check out NZ with us. Ewe’ll be glad you did.