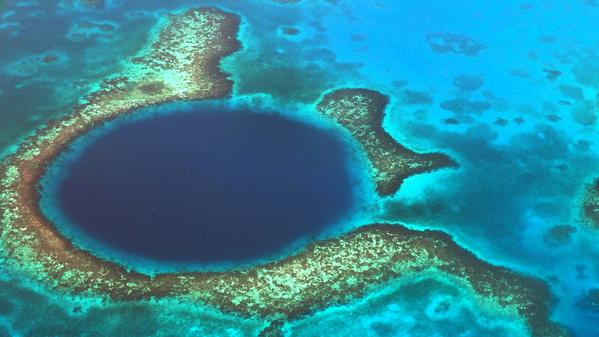 The Great Blue Hole is an underwater sinkhole that researchers believe is the largest of its kind. Join award-winning food & travel writer Jodi Ettenberg as she recounts the history of this submarine superlative.

When I was in elementary school, I was assigned to write a one-pager about natural wonders. I contemplated nearby Niagara Falls, or perhaps the cavernous Grand Canyon, but ended up settling on the Great Blue Hole in Belize.

Made famous — for a Montrealer, at least — by Jacques Cousteau’s dive in 1971, the Great Blue Hole was the subject of wonder and awe for my young brain. The paper was short and described the giant sinkhole, explained where it was located and that a man named Jacques had swum in it. I wasn’t the most detail-oriented at 7 years old, so it didn’t mention his scuba dive or anything further. But my fascination with the Blue Hole remained over the years. This spring I was finally able to see it in person on my National Geographic Journeys with G Adventures Explore Belize trip.

As sinkholes go, the Great Blue Hole in Belize is unparalleled. Located near Lighthouse Reef, approximately 100km (63 mi) from Belize City, it is the largest natural sinkhole in the world and part of the UNESCO recognized Barrier Reef Reserve System.

Blue holes consist of mineral-rich caves created during ice ages past. At this time, ice caps grew and the sea levels fell, creating perfect conditions for underwater karst caves to form. The karst, newly exposed from the drop in sea levels, was eroded by rain and groundwater.

For the Great Blue Hole, the Encyclopedia of Coral Reefs reports that it was formed by the “subaerial dissolution of the Pleistocene reef limestone during glacial sea-level lowlands, and later roof collapse.” Got all that?

In plain English, the erosion of limestone created caverns and tunnels, slowly undermining the rock until it eventually collapsed on itself, forming a sinkhole. As past ice ages ended and the seas began to rise, the sunken limestone caves were flooded with water once more, becoming blue holes.

Why is it so blue?

The circulation of water in these sinkholes is very poor, since their shape prevents much current flow. After a certain depth the waters are often anoxic, meaning that they are depleted of oxygen.

Within the steep walled depression of a blue hole, there is a heightened contrast of the dark waters from deep within the sinkhole and the light blue of the shallower tropical waters that surround them.

The colour isn’t due to any particular bacteria or reef, but rather the contrast of white carbonate sand against see-through waters, since blue light manages to travel more aggressively than other lights on the spectrum. This means that it reaches the sand down below and reflects up to us, in shades of blue.

Mayan decline and the Blue Hole

My piece for G Adventures about Tikkal talks about the decline of the Maya and the role of drought in the civilization’s eventual collapse. Research from the Blue Hole has also confirmed this theory. A Guardian piece from 2015 notes that:

“Scientists from Rice University and Louisiana State University found evidence in Belize’s Great Blue Hole, a 400ft-deep cave in a barrier reef, that supports the theory that drought and climate conditions pushed the Mayans from a regional power to a smattering of rival survivors and finally a virtually lost civilization.”

The researchers took sediment samples from the Great Blue Hole and from a lagoon in central Belize, both of which trace geographic lines around the places the Maya faced decline in 800-100 AD. From the samples they measured the levels of aluminum and titanium, both signs that heavy rainfall from cyclones “pushed” those elements into the sea. Their study on the lagoon and the Blue Hole revealed very little titanium in both water sources, meaning that there were fewer cyclones and more drought than was normal within that 200-year period.

Growing up in a big city with no turquoise seas in sight, the Great Blue Hole in Belize was one of the more exciting experiences that awaited me in Belize.

Glyn Collinson, a NASA scientist who dived the Great Blue Hole described it this way:

“It was the deepest, deep blue hole imaginable; A chasm that fell away deep into the deep, dark blue. It had been forged out of solid rock as caverns, hundreds of thousands of years ago during the last ice age. For eons, water filtered through the rock and into these great stone cathedrals, breeding multicolored stalactites and stalagmites. Then, one by one they collapsed in on each other, creating a chasm four hundred feet deep. As Earth’s swollen polar ice-caps receded, the warm Caribbean ocean swept in to fill the chasm with boiling white hands, the last rays of sunlight struck the chasm’s floor. Then, as the limestone broke down, it began to rain tiny fragments of rock, which slowly began to fill the great Blue Hole.”

An aerial view of the Blue Hole was what I wanted most, since it’s from the air that you can see its unique shape. Though skydiving into it would have been great, I opted for a simple small plane trip, booked off Caye Caulker.

The plane ride took about an hour, looping past Lighthouse Reef to the hole and back past a shipwreck to reward us with a concluding view of Caye Caulker from above. Here are some photos from the air:

For more photos of Belize, see my longer posts – including a brief history of the country – on my site, Legal Nomads.