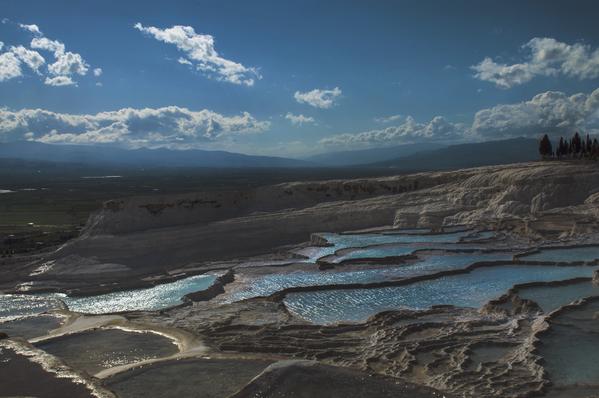 Adventure Unfiltered: Aurora Browne on getting stranded in Turkey

Forget perfect: Adventure is unfiltered. In a new blog series, G Adventures is asking a few people to share memories from trips where things went a bit sideways, but it made for the best story — and the most unforgettable experience. First up: Aurora Browne, a Canadian actress, comedian and writer. She's currently an executive producer — as well as co-writer and sometime-star — on the CBC series Baroness Von Sketch. Here, she recalls an unplanned, unsupervised, pitch-black visit to Turkey's famous Pamukkale hot springs.

After university, I went on a six-month backpacking trip with my boyfriend, heading east from Toronto around the globe until we looped back home. Midway through the trip, we took a detour from Greece to spend more time in Turkey, as we were flying out of Istanbul in a week and a half and we wanted to explore it.

We took a red-eye bus ride into Central Turkey, where the landscape literally looks like it could be a backdrop for Star Wars. We saw wind-carved volcanic rocks and villages carved six levels deep into the earth, loved it, and decided we needed to do a loop to see the hot springs in Pamukkale.

We hopped on the trusty night bus — which was smoky as a bar (when you could still smoke in bars) — and headed south. What we didn’t realize was how quickly we would get there. At 5 a.m., we were dropped off on a dark gravel road in front of the hot springs — which were behind a locked gate.

We were sleep deprived, we were freezing (it was late October), we really had to pee, and absolutely no one was around.

Finally, out of desperation (and boredom), we decided to just clamber around the edge of the fence in the ditch and hike up the road to the springs, which are at the top of a cliff — in the dark. By the time we began our ascent, the sky was starting to lighten up; once we reached our summit, we realized what a gift it was to have been dumped here all by ourselves. The hot mineral water had created a cascade of milky white infinity pools filled with warm steaming water, and we dipped our feet into the warm pools as we watched the sun come up — just the two of us. The tourist busses arrived later; we had the place all to ourselves for a few magic hours.

We had big naps that afternoon at the hostel — totally worth the smoky bus ride.