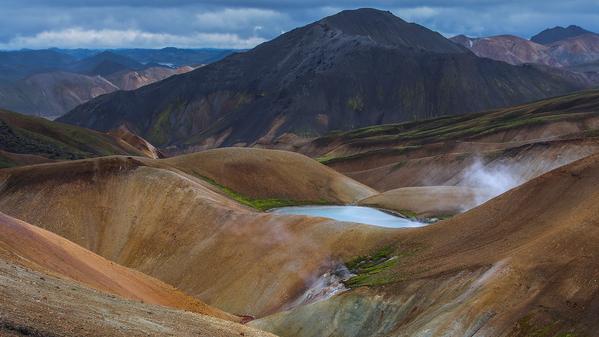 Active on ice: How an active adventure in Iceland comes together

Ever wonder what goes into putting together an Active tour? Find out here

We asked Alistair Butchers, Contracting Manager, and found the answer is one part thrill, one part adventure and a whole lot of passion for travel.

A tiny, rugged island nation perched at the lip of the Arctic Circle, Iceland is one of the most beautiful and extraordinary places on Earth. Spectacular fjords, looming volcanoes, vast lava fields, and burbling hot springs pepper a lush carpet of green hills and stark white glaciers. It’s the coolest place I’ve ever been in my life; an active-adventure playground seemingly crafted by Odin the All-Father himself.

Building an Active adventure can be a challenge, but Iceland makes it startlingly easy. The ideal Active destination is one with picturesque landscapes, diverse terrain, plenty of fresh air, and access to a variety of activities that make good use of both. Iceland ticks every one of those boxes – some of them more than once.

The challenge in designing the Iceland Hike, Bike & Raft tour was to create an experience that would be accessible to just about everyone, regardless of age or fitness level. If you’re in decent shape and are excited about the prospect of taking on a new challenge every day, you’ll find much to love.

As a mountainous land forged by volcanoes and tectonic shifts, Iceland holds a natural attraction for hikers and trekkers. One of my favourite spots is the valley of Reykjadalur. You start at the top and gradually descend down into the valley through a scene lifted straight from a fairy tale: rolling hills blanketed by a thick carpet of bold green grass bisected by a meandering river. The hike itself is a treat, but the real reward awaits at its end when you strip down and slip into the river at the spot where the cold water meets an underground hot spring. The result is the most therapeutic soak I’ve ever had – the perfect balm to the day’s efforts.

If you’ve done even a little research into Iceland, you’ll no doubt have heard about the Golden Circle, a 300km (186 mi) trail through central Iceland. Encompassing Þingvellir National Park, the glorious Gullfoss waterfall, the volcanic Haukadalur valley and the famous Geysir geyser. The Golden Circle affords a fantastic introduction to the natural and geothermal wonders of the country. Most tours do the route by bus, which I’ve never understood. Iceland is a place best experienced and understood through physical contact. That’s why we do the Circle by bike, which adds a physical dimension to the experience and really puts you in close contact with the landscape, the elements, and the spectacular views. (Iceland is a friendly place, so be sure to give the bus-bound daytrippers a cheery wave as you pedal by.)

As amazing as its adventure possibilities on terra firma are, Iceland gets really fun when you venture off dry land. Rafting can be a challenging activity to work into itineraries; we can’t expect everyone on the tour to be a skilled whitewater rafter. Thankfully, Iceland’s mighty Hvítá River makes it particularly easy. The Hvítá is medium-fast with a few rapids, but nothing too intense for a first-timer. At the other extreme, kayaking the glacier-carved Drumboddsstaðir fjord is one of the most relaxing activities you can do that still qualifies as “active.” The diversity of experiences is, in my opinion, the best part of designing (and taking) multi-sport tours; there’s something new to try just about every day, and if you discover that you really like a specific activity, you can probably do it again somewhere else on another Active tour.

If you’re worried that you’ll have to pack extra gear for a multi-sport tour, don’t. All you’ll need for most of them is a sturdy pair of hiking boots you can trust and sneakers for biking. Everything else – life jackets, paddles, trekking poles, snorkels, and other specialist gear – is supplied by us.

You’ll need that snorkel (and a dry suit, flippers, mask, and what can only be described as a sleeping bag with arms and legs) when you snorkel the Silfra fissure. Yeah, that’s right: snorkelling. In Iceland. It sounds insane, but it’s far and away one of the most spectacular things I’ve done in any of the 50 countries I’ve travelled to. Sufficiently outfitted in the aforementioned sleeping-bag suit, you slip under the surface of the 2°C (35°F) water and enter an environment that can only be described as “otherworldly.” The water is impossibly clear – on a good day, you can see about 40m (131 ft) down and 100m (1,076 ft) across – and the luminescent blue-green algae all around you combine to create an effect akin to floating above an alien planet. One word of advice: don’t leave your home planet without thermal underwear.

Incredible landscapes, intriguing culture, impossibly warm-hearted people, and an abundance of active pursuits are what make Iceland one of my favourite places. It’s a place that feels timeless and busy all at once – the volcanoes literally reshape the land by increments each day, and it’s not uncommon to experience all four seasons in the space of a single day. But all of that wonderfulness is, of course, difficult to keep under raps. Iceland is a bit of a secret right now, but it won’t be for long. If you’ve never been, get there now. And if you’ve already been, it’s only a matter of time before Iceland calls you home once again.

Get active in Iceland on the Iceland Hike, Bike & Raft tour. We’re thrilled at the prospect of showing you this big blue planet of ours — check out our small group trips here.