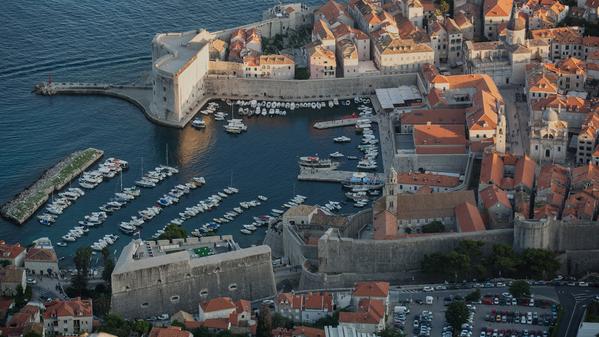 Dubrovnik, Croatia is a city in Eastern Europe whose popularity has been increasing greatly in the past few years.

Dubrovnik, Croatia is a city in Eastern Europe whose popularity has been increasing greatly in the past few years. As of July 1, 2013 the country is now a member of the EU perhaps making it now even more popular destination for travelers. The city is most popular for an area known as the Old Town, which is fortified by defensive stonewalls which are known as some of the largest and most complete in Europe.

In 1979 the city became listed as a UNESCO World Heritage site of which it was endangered from 1991-1998 when the city was besieged by Serb-Montenegrin forces. The city has since overcome these troubling times and has put them in the past but if you look close enough you can still see some of the damage left on the city.

In the warmer summer months Dubrovnik is a popular port of call for cruise ships. Each day between 10am-6pm the streets are flooded with tour groups which some might find a bit off putting but if you stay off the main streets during those times and venture into the small alleys and meet the locals you will find a city with friendly people and a unique charm that might make you want to stay longer than planned.

Eat - Start your day by either grabbing a coffee and pastry at the popular Gradska Kavana café next to the Rector’s Palace in the Old Town or go to the bakery just outside of Ploče Gate for a quick bite of cheap and tasty Croatian pastries, they have everything from sweet to savory.

Do - The first thing you should do after grabbing a bite to eat is go to the Old Town of Dubrovnik and walk the city walls to give yourself a good overview of the city. The walls are open daily year round at varying times. From June to August they open as early as 8am and the earlier you can get there the better as you will 1) beat the heat of the hot sun and 2) beat the crowds. There are two entrances to walk the walls one at the Pile Gate entrance to the city and one at the Ploče Gate and you can only walk in a counterclockwise direction. I recommend starting at Ploče Gate so you can get the hilly part and the majority of the stairs done with at the beginning. Starting here is also where you will get the best views of the Old Town.

Swim – After walking the wall you might be a little hot. A good idea would be to head to the Old Town Port and walk to the right along the outside of the wall.  Continue around Fort Saint John to the sea wall. Here you will most likely see people jumping in and out of the water in a roped off area for a refreshing dip.

Eat - Keep lunch cheap so you can spend more in the evening at dinner. Either buy some bread, cheese and Dalmatian meats at the grocery store or go to one of the many pizzerias for a cheap pizza or slice.

Visit – Go to one of the Old Town’s many museums. Inside Fort Saint John you can visit the city’s maritime museum, you can take a tour of the Rector’s Palace, stroll through the Dominican Monastery or the Franciscan Friary somewhat hidden near Pile Gate where you can see old alfresco paintings, artifacts, relics, the remains of an old pharmacy and even a hole still in the wall from the attacks in the 1990s.

Eat – After a long day of touring you will be looking for a good meal. Many people will suggest you go to the Bosnian restaurant called the Taj Mahal and for good reason. As long as you like meat this might be your favorite meal of the trip. They fill up fast so either go early or make sure you have a reservation.

Do – One of the things that Croatia is popular for is all of its surrounding islands. Either book yourself a sailing day trip or take a ferry to the nearby Lokrum island or Lopud island to enjoy your day in the sun, and water and you can also do a little bit of hiking, but be warned of the nudist side of the island on Lokrum.

Other possibilities include renting kayaks or taking a kayak tour, going on one of the many one-hour panorama tours, which give you a nice view of the city and Lokrum Island from the water or heading to the public beach. At the public beach just a 5minute walk from Ploče Gate you can layout on the rocks or pay for a chair at the East West beach club.

Eat - You can’t visit Dubrovnik without trying the seafood. Lokanda offers great calamari and prawns at cheap prices or if you have money to spend visit Pupo, which is the kind of restaurant where they present the fish in front of you then debone it at the table. The Portun family restaurant also serves a delicious Orlando Risotto, which is a traditional Dubrovnik black risotto with prawns and Dalmatian spices.

View – Outside of the Old Town is a cable car that will take you to the top of the Mount Srd to get a nice view of the city and surrounding islands. At the top is a gift shop and bar and restaurant, a great place to stop for a drink to take in the gorgeous view and a great place to be for sunset.

Drink – When in Dubrovnik be sure to have a drink at the Café Buza. Walk up the baroque staircase (modeled after Rome’s Spanish steps) towards the Jesuit church of St Ignatius. Turn left and you will see a sign telling you to go right to cold drinks and a beautiful view, eventually you will come to a hole in the wall and you have reached Café Buza perched on the edge of a cliff on the side of the city walls. Here you will find a great view of the ocean and a nice spot for some cliff jumping.

An honorable mention goes to seeing the Dubrovnik Symphony Orchestra in the Rector’s Palace. Whatever you do in Old Town Dubrovnik don’t forget to take a moment and get lost in the back streets and alleyways. Its not a big place so you won’t be lost for long but you might be surprised by what you find.