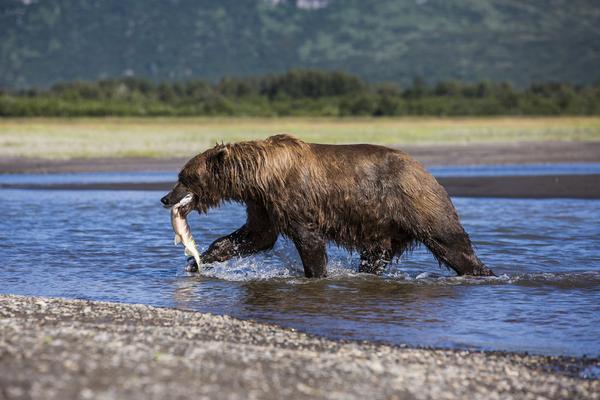 Wild about these magnificent furry beasts? We've got a few things you should know before heading out on an Alaska tour.

There are few experiences as breathtaking as spotting an animal in its natural habitat — and few animals that you’d be luckier to see in the wild than the grizzly bear. While we make no guarantee, G Adventures travellers on tours like Alaska Kenai & Denali Adventure occasionally encounter these incredible creatures. If you’re considering the trip — and even if you’re not — here are five things you might not know about Ursus arctos:

1. They’re not as big as bears come

Make no mistake: grizzlies are imposing (and dangerous). But as far as bears are concerned, their size — male grizzlies weigh in at a maximum of 270 kg; females range between 130-200 kg — puts them in the middle of the pack. The largest bear on earth is in fact the polar bear, males of which can grow to up to 630 kg (brown bears, which can hit weights of 400 kg, are in second).

2. They’ll eat almost anything — but nothing eats them

Most bear species are omnivorous, meaning they — like humans — are biologically engineered to eat and digest both plants and animals: grizzlies will nosh on anything from fruits, berries and roots to salmon, rodents and — believe it or not — moose. But they have no natural predators: the grizzly’s only threats in the wild are habitat loss, climate change, and humans.

3. Don’t be fooled by their heft: Grizzlies move fast

Think a 270 kg, two-metre-long beast can’t give chase? Think again: in 2014, a grizzly in Wyoming was captured on camera outrunning a car. In fact, the bears can hit speeds of up to 35 kilometres per hour — which, for context, is eight kilometres per hour faster than Usain Bolt.

4. Their bite is (measurably) stronger than their bark

Grizzlies are solitary creatures, so they don’t rely on a huge array of vocal cues for communication: mainly, they mark their territory, and use non-vocal sounds — like tooth-clacking, sniffing, snorting or huffing — to communicate with one another. But when it comes to chomping down, their skill is formidable: the bite of a grizzly has been measured at 8 megapascals — that’s strong enough to crush a bowling ball.

5. They’re good for the planet

When grizzlies eat, they also give back — in a number of ways: the soil they upturn while digging for roots is more nitrogen-rich; the seeds of berries that they digest and pass often grow into new plants; and salmon carcasses that they carry from the water to the land enriches the soil.

Before you go, enjoy 30 seconds of a salmon catch by one big furry beauty spotted on tour: