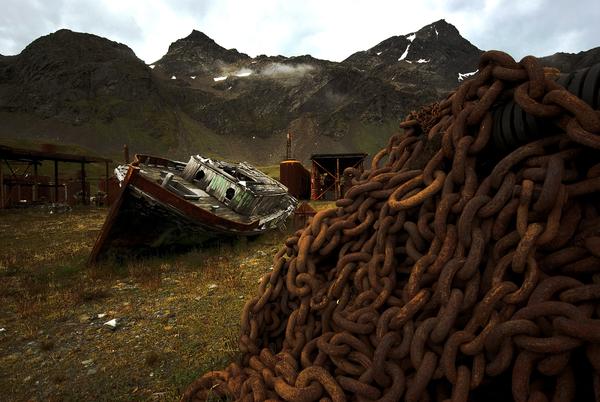 This tiny south Atlantic island is the last resting place of one the world's greatest polar explorers, Ernest Shackleton

There is no easy way to the British Overseas Territory of South Georgia Island. This tiny crag of mountains and penguin colonies in the southern Atlantic Ocean is more than 800 miles away from the nearest landmass — the almost-as-diminutive Falklands Islands to the northwest. The only way tourists can visit today is by expedition cruise ship.

It's after long voyage when you moor in the stunning natural harbour of Grytviken. Thankfully, the trip is also a comfortable one. It's a far cry from the voyage here undertaken by the polar explorer Ernest Shackleton and his epic voyage here in 1916 in one of the smallest boats imaginable.

Shackleton had come south in his ship Endurance on an attempt to traverse the Antarctic continent on foot. It was his third expedition to Antarctica, but this time he never even made it to the mainland. After sailing south, Endurance became stuck fast in the pack ice and after eleven excruciating months, was crushed to matchwood. After camping on the ice until it broke up, Shackleton eventually led his crew and all they could salvage in three lifeboats to the nearest dry land, a huddle of rocks called Elephant Island. It was a safe refuge, but one far from the routes of passing whaling ships that might bring rescue.

Thus was launched Shackleton's most daring venture yet. In the tiny lifeboat James Caird, with a hand-picked crew of five, Shackleton set out on some of the roughest seas on the planet for South Georgia, from where a ship could be sent for the rest of his crew.

The boat was tossed by heavy seas and vicious winds. Capsizing was an ever-present risk, frozen spray on the sails made manoeuvring hard, and accurate navigation in rolling waves was a herculean task. Yet somehow Shackleton made reached South Georgia after 17 days. It was one of the most astonishing nautical voyages ever made

Cruelly, after all their labours they landed on the wrong side of the island, and the boat was judged no longer seaworthy to continue. Between them and help lay a snow-covered mountain range 9000 feet high that had never been crossed. Faced with no alternative, Shackleton, along with Tom Crean and Frank Worsley, set out to do just that. Fighting exhaustion, they managed it in 36 hours, finally giving the crew of a whaling station the surprise of their lives when they walked into camp. Resting only eat a much-needed hot meal, Shackleton's thoughts were immediately focussed on bringing the rest of his crew home. Rough seas meant it took three months for a rescue ship to reach Elephant Island. From the moment that Endurance caught in the ice to their final moment of salvation, Shackleton's men had spent an astonishing 17 months exposed to the elements. Every single crew member survived.

When Shackleton died in 1922, he was buried on South Georgia just outside the old whaling station of Grytviken. A pilgrimage to his grave is an essential part of any trip here. The nearby South Georgia Museum, housed in the old whaling station manager's house, contains a replica of the James Caird. It is a humbling object, barely larger than the zodiac landing craft that ferry visitors between ship and land. When you sail away and your vessel pitches and rolls once more in the great southern ocean, it's hard not to think again of Shackleton and his men a century ago, and marvel at their achievements. Although they never reached Antarctica, the Endurance expedition could hardly have been better named.

Want to see South Georgia Island for yourself? G Adventures can get you there. Check out our Antarctic expedition tours here.