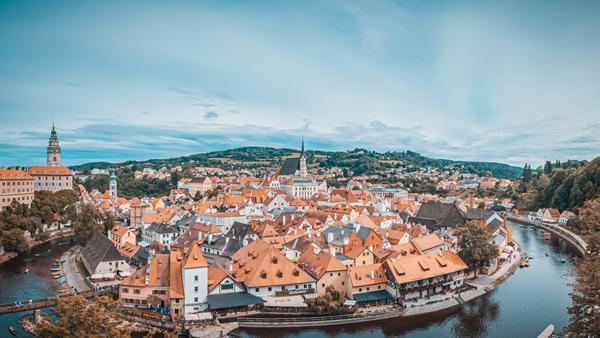 by Christina Newberry Posted on 12 January 2022

Venture beyond the Czech Republic’s capital city to find an astonishing number of UNESCO sites and traditions, along with far smaller crowds. Here are eight to get you started:

The Tugendhats, a Jewish family, only got to live in the house for eight years before fleeing to Switzerland. Seized by the Gestapo, the villa was extensively damaged through use as everything from a gym to a stable.

Now restored, the villa was the site of the signing of the agreement to divide Czechoslovakia in 1992. It’s been a museum since 1994.

Dating back to the Celtic period, the UNESCO-designated Ride of the Kings has roots in Whitsuntide processions to ensure a good harvest, as well as initiation rituals marking the transition of boys to men.

A young boy, designated the year’s King, rides a horse through the village in a girl’s costume, holding a rose in his mouth — no one is entirely sure why. His entourage precedes him, taunting passers-by with rhyming jabs.

The most famous ride takes place each May in Vlčnov. The festivities begin the night before, when villagers gather to sing and drink at local wine cellars, known as búdy, outside town.

Literally meaning “blueprint,” Modrotisk is the Czech technique of indigo dye. Craftspeople apply a secret paste to wooden blocks, some dating back hundreds of years and often passed down through families. When stamped on white cotton, the paste blocks the indigo, creating patterns often seen in local folk costumes.

At the Strážnice Blueprint Workshop, Gabriela Bartošková works with blocks her great-great-grandfather first used in 1906. Moving slowly and methodically, she says one creates this UNESCO-designated work “more with your heart than your hands.”

From small puppet stages in family homes to elaborate theatres purpose-made for puppet performance, puppetry is a staple of traditional Czech entertainment that was added to the UNESCO Intangible Cultural Heritage of Humanity in 2016.

Made mainly from wood and up to a metre in height, Czech puppets are built by master craftsmen and brought to life by professional puppeteers. The Marionette Museum in Český Krumlov (pictured above in our header photo and also a UNESCO designated historic town) offers a look at the history of this Czech tradition.

Along the border with Slovakia, these vast meadows in the low mountains became a UNESCO Biosphere Reserve in 1996. There are extensive orchid meadows and grasslands, along with forests and orchards, in a protected region of more than 71,000 hectares.

With well-marked paths, the White Carpathians are a perfect spot for a stroll or a more serious hike. You’ll be guided by the Czech Hiking Markers Standard, a colour-coded trail marking system developed here and used worldwide.

This 35-metre column in the Moravian Baroque style was built in the early 18th century. It’s decorated with Central Europe’s largest collection of Baroque statues within a single monument. Originally created to give thanks for the city’s survival of the plague, it’s a testament to the town’s catholic faith.

Look for the embedded gilded cannonball. It’s there to commemorate local protests that convinced the Prussians not to destroy the column during a siege in 1758.

7: Gardens and Castle at Kroměříž

You’ll have to wear site-provided slippers to visit the castle, an effort to protect the 200-year-old floors. It’s worth it to ogle the Czech glass chandeliers, 88,000-book library, and a Rococo-style dining room that seats 2,000. The lavish interiors served as interior palace shots for Amadeus, standing in for Salzburg.

The Baroque garden was conceived as a series of unique green rooms and looks much as it did 300 years ago. In the summer, 60,000 annuals provide an eye-popping burst of colour.

This Renaissance-style castle boasts an exterior covered in 8,000 sgraffiti “envelopes,” each with a different scene. Among its many formal rooms, most interesting is the castle theatre, with its original French garden set, where 16th-century nobles performed for their own enjoyment.

The castle complex includes several other historically important buildings, including the apartment in the former castle brewery that is the birthplace of Bedřich Smetana, the composer known as the father of Czech music.

Check out our small group tours to the Czech Republic.