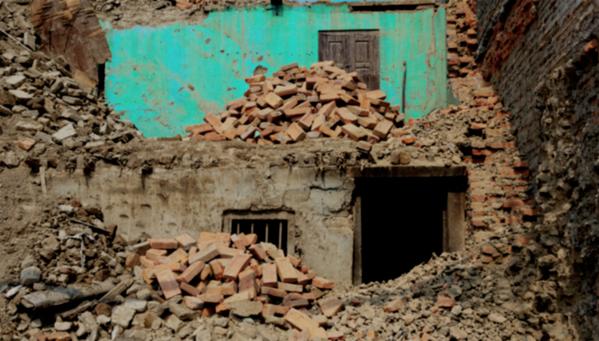 Update: May 7, 2015 — Nepal has experienced extensive damage and loss, and the death toll from the devastating earthquake has now surpassed 8,000. In the wake of the worst quake to hit the Himalayan nation in nearly a century, 2,200 donors from 40 countries in the G Adventures network have now raised more than $194,000 for earthquake relief efforts. Visit Planeterra’s Nepal Earthquake Relief and Recovery page today to show your support.

G Adventures shares a strong connection with Nepal, bringing travellers to the Himalayan nation for over 15 years. But there are few connections stronger than with Tashi Sherpa, a G Adventures Chief Experience Officer (CEO) who has been leading tours for the company since 2009. Born to a father who worked as a trekker and a mother who ran a mountain lodge, Tashi is a natural traveller, growing up in hostels in Kathmandu and Pokhara.

On April 25, 2015 at 11:56am local time, Nepal was struck by a devastating earthquake—the most powerful disaster to strike the region in over 80 years. This is Tashi Sherpa’s account of the event, as told to Daniel Sendecki and Sacha Mlynek.

I was with a friend when the first tremor hit. Instinctively, we stumbled into the middle of the street. The earth shook and nearby buildings swayed violently enough that I thought they might come down on top of us. I turned to run and take refuge against a fence, but the ground’s movement caused me to lose my balance and I ran headlong into it, blacking out for a moment. Seconds later, I came around to the sounds of crashing cars and screaming people and a sharp pain in my hand. Sections of the wall had toppled, so my friend and I pressed on as a cloud of dust rolled over top of us.

The quake seemed to last forever, and when the earth stopped buckling, panic quickly set in. People were petrified. I thought of my family and rushed home to discover they were okay. As the tremors slowed, we knew we’d have to collect what we could to make a shelter. We’d taken cover on a school’s grounds, open enough to ensure we’d be safe even in the face of another big quake.

My hand was injured. I went to a nearby hospital, which had spilled out into the street for fear of another quake—even those in the ICU were out in the road. Victims increased by the minute, some of whom had been crushed and were too far gone to be helped. Exposed to the elements, people in the ICU were dying, too. I left without seeing a doctor; there were just too many who needed much more urgent care. I bought a sling and left.

As I returned to my family, I began to understand the enormity of the devastation. Stone and debris littered the streets, and foundations were ripped apart. I was able to find some food and water (enough to last us at least a day) and returned to the school. Huddled together with about 50 others, we spent the night in a shelter that had been partially crushed by bricks from a nearby building. We had no choice. It was raining steadily. We slept on and off, rocked by aftershocks. But we were safe.

We were woken by an alarm at about 5am—another strong tremor. In the light of morning, we felt powerless. Mothers and children cried for their lives. Rumour was there would be another large earthquake later in the day. Along with a few others, my family gathered what few belongings we were able to recover (mattress, blankets, food and water) and looked for safer ground.

Hundreds of families took shelter in a field nearby—some with literally nothing at all. Others tried to fashion makeshift tents. Because of my injury, I wasn’t able to pitch my own. I asked people nearby for help. Everybody was still fearful and some more helpful than others. I finally met a friend whose family welcomed us in and we consolidated our supplies. We were now a big group—two grandmothers, three couples and five kids.

When mobile service resumed, I was able to connect with friends and family in the surrounding area. It was then I learned that all of Nepal was in chaos. I was overcome by grief. A great deal of the country had been destroyed. Thousands were dead. And again I felt helpless, with a lame hand and a family that was relying on me. Soon after, it started to rain. The suffering wasn’t over. I cried and cried.

I tried to sleep but couldn’t. My eyes searched through the people that were huddled nearby—lying down, exhausted, but awake and fearful of another disaster. I saw infants, pregnant mothers, and old people who were ill. There were families who had nothing and were exposed to the rain. We were lucky enough to have shelter, and I felt equally thankful and guilty for this small blessing.

Few shops were open, making it difficult to stock up for another day. I heard that food was impossible to find in some parts of Kathmandu. In our tent community, men chatted about our current predicament, kids were playing as kids do, and grandmothers were practicing their Buddhist chants. People shuffled through their supplies and searched for loved ones. Out in the street, it was like a Hollywood disaster movie. People rushed, police vans roared by, and ambulances and fire trucks peeled around corners with their sirens and lights flashing.

A friend brought news that houses had been flattened in nearby Kapan, just a few minutes’ drive from our neighbourhood. We ventured out and confirmed the reports. The area was devastated. I returned to our shelter to learn that Taksindu, my village, which I’d been trying to reach since the first tremors, had been leveled. My family home was gone. Aftershocks were still frequent, but diminishing in intensity.

As the hospitals resumed service, I was able to get an x-ray. While waiting in the long queue, I accessed the internet through my mobile provider. I could check emails and read updates. I learned of the donation efforts—Planeterra’s in particular—and the profile that the earthquake had received in media around the world. As the tremors subsided, I felt it was safe enough to return home. It was better than being exposed to the elements and the possibility of disease.

With my hand in a cast, I reconnected with friends on social media and discovered hundreds of messages wishing my family and my people well. Even though I was injured, I resolved to do as much as I could for my country and my community. So I started sharing my story—and sharing my photos—to bring attention to the people of Nepal. It is the least I can do. Just imagine how many families here are in a much more dire situation than the one we face.

How can you help?

In the spirit of supporting local communities, G Adventures and Planeterra Foundation are working with partners on the ground to identify the critical needs of hundreds of our Nepalese brothers and sisters like Tashi Sherpa. Many have been left homeless, and are sleeping outside in tent communities where conditions grow worse every day.

To address this urgent need, G Adventures and Planeterra have already delivered $10,000 for emergency relief that will see water, food, and blankets distributed to villages in the Kathmandu Valley. The balance of money raised will be used for the long-term repairing and rebuilding of homes in the region. This includes the homes of dozens of porters, guides, and homestay hosts, and the homes of the women from Planeterra’s Sisterhood of Survivors community project in Kathmandu.

Visit Planeterra’s Nepal Earthquake Relief & Recovery page today to help us raise over $200,000 for Nepal. With your donation, G Adventures and the Planeterra Foundation will support the Nepalese as they begin the painstaking task of rebuilding.