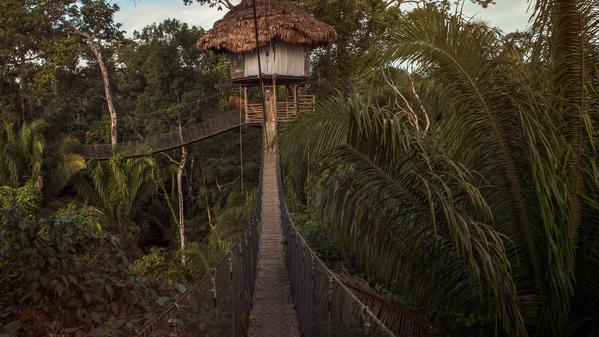 Working together: Tourism and the Amazon’s indigenous peoples

Writer Pam Mandel discusses how interacting with the people of the Amazon can create an opportunity for cultural exchange rather than exploitation.

Indigenous people make up almost half the population of Peru, though consider this: the Amazon basin was once home to an estimated 2000 different nations. About two-dozen identified groups remain in the Amazon Basin, some living in relative isolation. Others have embraced urban life and conveniences while still practicing shamanistic religion and speaking their native language, in addition to Peruvian Spanish.

In a forward-thinking move, the Peruvian government recognizes all of the country’s nearly 100 different languages as “official.” The country also continues to build designated reserves, which aren’t just about saving the Amazonian rainforest itself, but also about establishing protected resources on which the rainforest’s people can continue to rely for generations.

In 2015, the Peruvian government decided to make contact with the Mashco Piro, a so-called “uncontacted tribe” that inhabits the Manú National Park. This prompted all kinds of questions about isolation, tourism, the impact of missionaries… So many complicated issues and assumptions have come to the forefront, the result of not-always-peaceful interactions between the Mashco Piro and “outsiders.”

Historically, contact with outsiders hasn’t gone well for South America’s indigenous peoples. Members of the tribes were enslaved by colonial Europeans, or ravaged by diseases against which they had no immunity, or less violently but no less damaging, slowly erased by cultural assimilation. Given the intense onslaught against indigenous people, it’s a wonder that the Mashco Piro remained unknown for so long. It speaks not just to the deep relationship the tribe has with the Amazon rainforest, but also to the tangled unknowable nature of the forest itself.

Academics, anthropologists, philosophers, and adventurers are drawn to these places along the twisted network of the Amazon River and its tributaries. They — we — seek out the distant tribes of the Urarina, the Yagua, the Harakmbut, the Machiguenga, hoping to learn how these people live their lives, subsisting on nature, holding their ground, and maintaining their culture and history in spite of centuries of effort to erase their religion and way of life.

In the 1970s, anthropologist Michael Brown spent time among the Awajún, finding them irascible, independent and very tough — he went on to write a book about them: Upriver, The Turbulent Life and Times of an Amazonian People. Modern meetings between Europeanized people and indigenous tribes are still potentially fraught with misunderstanding. The Awajún made news in 1995 when a pair of travellers had an encounter along the banks of Río Marañón; it seems they were caught in the crossfire of what may have been a territory dispute with Ecuador at the time. Now, it’s often logging and oil businesses that create conflict when they seek to exploit and irrevocably change the land upon which the Amazon basin’s indigenous peoples rely.

G Adventures gently wades into these waters, making sure that visiting an indigenous community is a beneficial and respectful experience for everyone involved. Groups don’t enter places they don’t have permission to visit. G Adventures pays a fee when they do visit — that money benefits local families and is used to care for local attractions. Having a local source of income — tourism — helps keep the people living in these remote areas close to home. Sometimes, there are crafts for sale, and you can be sure that they were made by local people. And the experiences here are personal — visitors are given the opportunity to eat a home-cooked meal with the residents of the places visited on tour. Interacting with the people of the Amazon basin isn’t just drive-by tourism, it creates the opportunity for cultural exchange rather than exploitation. The takeaway can be a deeper understanding of the relationship between the people of these lesser-mapped regions and the environment upon which they depend.

G Adventures runs a number of departures in the Amazon encompassing a wide range of departure dates and activities to cater to different tastes. We’re thrilled at the prospect of showing you this big blue planet of ours — check out our small group trips here.