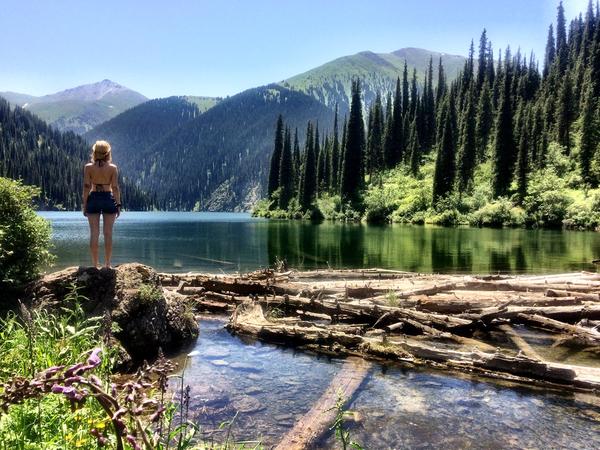 Why Kazakhstan should be your next destination

With its fascinating culture, spectacular nature, and tasty culinary delights Kazakhstan has something for everyone.

If I asked you to tell me the first thing that pops into your mind when I mention Kazakhstan, there’s a high chance of you chuckling and saying “well, Borat.” The now-classic comedy actually has little to do with this country (as it’s filmed in Romania, and Borat mainly speaks Hebrew) so let’s just get that out of the way immediately. But the film did put Kazakhstan on the mind of many world travellers, and it definitely deserves a spot on everyone’s list of must-see destinations. From having the world’s tallest tent to the last wild apple orchards, Kazakhstan will leave you awestruck by its range of beauty, as you move through its lowlands, valleys, mountains, and cosmopolitan cities.

Here are a few highlights you can’t miss in this central Asian country, all easily reached from the former capital of Almaty.

While claiming to be the world's largest landlocked country, it is the proud owner of numerous charming lakes. Immerse yourself in an incredible alpine landscape and take a hike through the three Kolsai lakes just off the northern side of the Tian Shan mountains, their peaks appearing in stark contrast in the background. Don’t miss out on the magical Kaindy Lake, which formed after an earthquake in the beginning of the 20th century that sank a large birch tree forest. Underwater, you can still admire the perfectly mineralised leaves. Of course, if the water is a little too cold, you can always sit on the shore, taking in the picturesque scenery. The impressive Charyn Canyon — shaped by sand, wind, and water — is another breathtaking destination for outdoor adventures. Stretching along the Charyn River for over 150 km, it is full of kaleidoscopic figures resembling towers, castles, animals, and even a witch. Kazakhs proudly promote it as a strong rival to the Grand Canyon.

For those lovers of architecture, a visit to the city of Almaty is a must. Admire the predominantly Soviet-built structures and wide avenues, making sure to check out the Hotel Kazakhstan, the flamboyant national landmark with a crown on its rooftop. After you’ve walked through the city, head to Shymbulak skiing resort, where you can take a 20-minute panoramic cable car to as high as 2,200 m. (7,200 ft.) soaring over the highest ice rink in the world, Medeu. And if you don’t have time for a stopover at the largest and oldest spaceport in the world (the area is still controversially owned by Russia) which launched the first human to orbit and the first satellite, you can always visit the elaborate metro station dedicated to the famous Baikonur Cosmodrome. The easy-to-navigate public metro recently opened after more than 20 years of construction. This one particular stop has been designed to make you feel like you’re in the actual space launch facility, showing amazing cosmic missions on multiple screens.

Being among the largest tea importers in the world, Kazakhstan has a fantastic tea tradition — “chai,” as it’s called by the locals — which you can experience in typical teahouses (chaikhanas). Here, no family or friendly gathering happens without sipping the warm brew. It’s normally drunk strong, typically with cream, or sometimes prepared with salt and butter, and accompanied by baursak, a doughnut-like fried puff pastry. If this isn’t your cup of tea, take a sip of the infamous kumis (fermented horse milk) or shubat, which is made from camel’s milk.

Any fan of farmers’ markets must visit the Zelionyj Bazaar (The Green Market) in Almaty. Here you’ll be able to taste nearly every staple delicacy, from kurt (dry, salted handmade cheese) to straight-out-of-the-oven tohax (round shaped traditional bread), to zhal (smoked lard from a horse’s neck). The Green Market is famed for having the largest selection of horse meat in the whole country. The early civilizations in Kazakhstan are thought to have been the first in the world to domesticate horses, which also included eating them; although there’s a strict rule that says to never eat the horse that you’re riding. The generous samples from the vendors will fill your belly, and plenty of cute souvenirs will likewise fill your suitcase.

With its fascinating culture, spectacular nature and tasty culinary delights Kazakhstan has something for everyone. Check out G Adventures Kazakhstan tours — and for other travel stories about enchanting destinations, follow me on Instagram: @irmantesungailaite