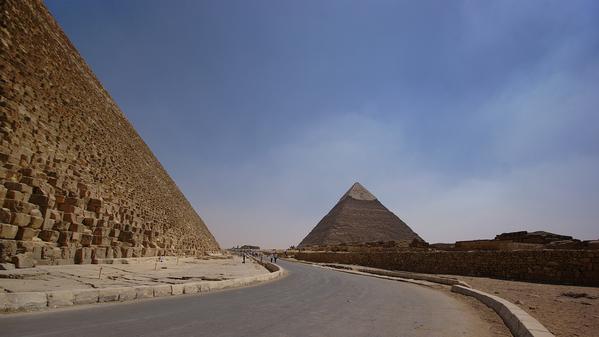 There is a small window of opportunity to see Egypt in all its grandeur, minus the hordes of tourists. Right now, you have access to an Egypt that few have ever witnessed. There are no line-ups, no struggles for photo-ops, no waiting

This past January, I embarked on a trip to a place I’d never been before: Egypt. Four days before departing, the headlines screamed of chaos, riots, and demonstrations. Egypt had held a constitutional referendum, and most of the calls I received from family and friends were anxious and less than supportive of my choice. Reassured by the hardy G Adventures team on the ground, though, I went ahead. Adventure doesn’t come calling every day, and although the headlines at home were negative, something about the place still called to me. I simply had to go.

As the sun rose, we emerged from the airport and were thrust headfirst into the wonderful, vibrant cacophony of Cairo traffic. First stop: two of the oldest pyramids in Egypt, the Red Pyramid and the Bent Pyramid.

It is one thing to see the pyramids looming in the distance, but quite another to stand at the foot of one. They remain the only standing wonders of the Ancient World and are, quite simply, breathtaking. As we stood, there marvelling at the Red Pyramid and preparing to climb inside, we realized that we were completely and totally alone – no other travellers, no lines waiting to get in, no parking lot filled with buses, no bustling about for an unobstructed photo. Maybe, I thought, it’s because these pyramids are lesser known than Egypt’s main draw, the Great Pyramid of Giza.

But later that afternoon, as we approached Giza, we encountered only a slightly busier site. And when we climbed up and into the Great Pyramid itself, we were alone inside the world-famous pyramid save for a small group of Egyptians on their way out. At the lookout point where millions of photos have been snapped, our group of ten accounted for about half of the tourists present. Mo, our great and knowledgeable CEO, told me that the throngs of people trying to get pictures are usually dozens deep and that it can take an hour or longer to get close enough to take a picture. Going into the pyramid can mean Disneylandesque lineups lasting hours more, but there we were, at arguably one of the most famous and recognizable historical sites in the world, and we basically had the place to ourselves.

This theme continued as we made our way around Cairo. At the end of five days, we had climbed into and out of two pyramids and visited the grounds of many others, saw the Sphinx, glided down the Nile, rode camels into the desert, wandered deep into an ancient bazaar, laid next to a bonfire in the Sahara and gazed up at the stars, tried stuffed pigeon (an aphrodisiac in Egypt!), sat in one of the oldest hookah cafés in Cairo filled with the aromas of the shisha smoking all around us, and witnessed a spontaneous wedding dance party on the side of the road.

There were demonstrations while we were there, but not for one single second did any of us feel even a bit uneasy or were even aware that they were going on. We were welcomed with open and loving arms, not just by our team there, but by all of the Egyptian people that we met.  They asked to take pictures with us, were passionate in their love for their country, and hopeful about its future. And they graciously thanked us at every turn for coming.

We never saw any military personnel. The only police we saw were a pair sitting under a tree eating lunch with the locals and a few waving at us from the back of a truck as they headed home from their shifts. We drove through Tahrir Square at midnight, the greatest threat to our safety being dinged by another car in the elegant madness that is Cairo traffic.

There is a small window of opportunity to see Egypt in all its grandeur, minus the hordes of tourists. Right now, you have access to an Egypt that few have ever witnessed. There are no line-ups, no struggles for photo-ops, no waiting. There is just Egypt itself – magical, historical, mythological, vibrantly alive, majestic, hopeful, drenched in culture, and awe-inspiring. You just can’t wrap your head around the greatness of this country or why it is so important to experience it. You just have to go.

There aren’t enough words to describe Egypt or the incredible, passionate and proud people that call it home. But for me, it was love at first sight and I embraced it with every fiber of my being. I am so glad we went and so grateful for the opportunity.

I’ll return to Egypt. There is so much more to discover. And I’ll go back soon because right now may be the very best time there has ever been to discover this incredible country and meet its inspiring people. If you want to discover a country in its most authentic state, don’t delay. Head to Egypt soon for an experience you’ll never forget and may never get again.

Egypt's landscape offers a unique travel experience. Go now to go back into the storied histories it has to offer. G Adventures runs a number of departures to Egypt encompassing a wide range of departure dates and activities to cater for different tastes. Check out our roster of small group trips to this mesmerizing land. Check out Egypt with us today!