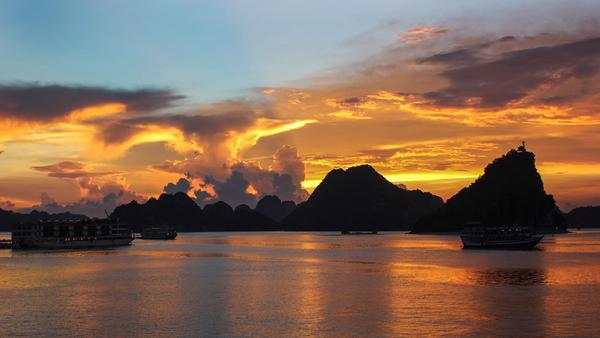 Vietnam: A great first step on the Southeast Asia trail

Tag along with travel blogger Becki Enright as she takes her first steps on this famous route.

by Becki Enright Posted on 24 September 2012

Typically, many choose Thailand with its bustling capital city of Bangkok and sun drenched beach islands as their first step in acclimatising to the beauty that is South East Asia. For me, I chose Vietnam; rich in complex history and still developing. It seemed more fascinating and full of buzz than the tranquillity of the Thai islands. I wanted a slice of the chaotic and frenetic side of Asia you always hear about.

At the age of 23 I’d never been out of Europe, counting Russia as my most far away destination from home. Vietnam had always fascinated me since learning about the America-Vietnam war in school. How do war-time atrocities affect the development of a country in the long run? Is it still beautiful? How does a turbulent history affect how locals view outsiders, travellers and foreigners? How does communist policy work today within the bubble of influence that is the capitalist world?

I had many questions and such an eager need to see a country in its entirety - to become a traveller and broaden my mind. Vietnam was far away; it was exotic, it held personal interest and a trip there in 2007 simply kick-started what has now become a deep-rooted love for this region of Asia.

If you are thinking of heading to South East Asia for the first time, Vietnam is a great first stop on the map. It’s viewed as the next most developed country in the mainland region after Thailand and while not as unknown and untouched as parts of Cambodia and Laos, it combines enough authenticity without being too remote and inaccessible. It has a trodden tourist path which you can take via a north to south or south to north route with some off the beaten track towns in between – one of the reasons why I am heading back.

I spent two weeks there on what is now similar to the Timeless Vietnam or Cultural Treasures of Vietnam tours, starting in Hanoi and travelling south down to Ho Chi Minh. Hanoi is fast-paced and startling, with motorbikes whizzing past you from all directions and where bustling Vietnamese life teems from every nook, cranny, side-street and market.  I floated along the tranquil waters of Halong Bay for two days, marvelling at the spectacular scenery from the junk boat before soaking up the royal history in Hue.

The tailors in Hoi An were as much a compulsory traveller must-do as the beautiful town itself and much needed relaxation was sought at the beaches in Na Trang and a trip to the local hot mud springs. For city lovers, the thriving commercial hub of Ho Chi Minh is as full of history as it is shopping and nightlife - a great contrast to the peaceful, scenic backwaters of the Mekong Delta.

The local people are friendly, open and interested in learning everything about you as you will be with them. You’ll experience not only the country’s ancient history but be stunned by its most recent, from the Viet Cong underground combat base that is the Cu Chi Tunnels to the war victims you will pass on the street. Hire a bike, walk, wander and explore at every opportunity, try local dishes (Vietnam’s reputation for great food is true) and feel your head spin as you try and adapt to the pace and chaos all around you.

My two weeks there was a great introduction, although I’ve heard that since then there has been a lot of change, and not always positive – from the tales of tourist scams and money swindling to the ruin of ‘tourist fishing villages’ and litter at Halong Bay. However, not everyone holds this opinion (we all, of course, want different things from travel) and although change happens in many places I only hope that it doesn’t lose too much of its authenticity as many say about parts of Thailand.

It’s natural that opportunists will emerge and take advantage as a country develops, but next year I plan to go back to see that for myself, not only because Vietnam holds special meaning to me as a traveller, but because it is important to make your own informed opinions. I had a fantastic time in Vietnam, and am sure I will find many more opportunities again, touching on the old and seeking out the new. As for everything else in between? Well, that’s just experience - not everywhere can be perfect.