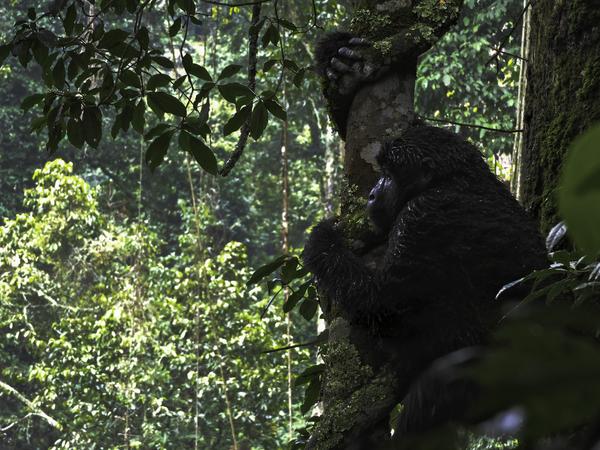 Up close and personal with wildlife conservation in Uganda

Nyangoro, a mother gorilla, and Muhumuzu, her baby, gaze curiously right at me. It’s mid-morning in Uganda’s Bwindi Impenetrable Forest, and I’m thousands of miles from my native Vancouver. Yet somehow I feel utterly at home in this humid East African atmosphere.

Resting amid giant ferns and acacia and mahogany trees, the mountain gorillas exude peace. This primeval, hill-strewn forest — a protected national park and UNESCO World Heritage Centre — is home to about half the world’s 1,000 mountain gorillas. The population, although still endangered, is rebounding.

Led by machete-wielding local guides, licensed by the Uganda Wildlife Authority (UWA), my group takes just over an hour to hike to this 19-member band of powerful primates. Bakwate, the dominant 300-pound silverback, strides right past us, and it’s beautiful and surreal. We spend an hour observing the gorillas from the recommended seven-metre minimum distance.

Uganda offers many marvellous surprises. Western perceptions of this equatorial nation of 41 million have been conditioned by movies like Raid on Entebbe, which depicts a stand-off between hijackers and commandos at Uganda’s biggest airport, and The Last King of Scotland, which spotlights dictator Idi Amin’s reign of terror.

However, those dark events occurred in the 1970’s. With increased political stability, visitors can happily explore 10 wildlife-rich national parks with tropical forests, savannah, and semi-desert habitat.

Not to say it’s always serene, as my subsequent foray northwest to the Kalinzu Central Forest Reserve shows. Home to nearly 400 of Uganda’s 1,000-plus bird species, this 147-square-kilometre area in Queen Elizabeth National Park is famous for its community of chimpanzees. Their eerie, whooping cries — sometimes resembling human voices — can be heard from two kilometres away.

Robert, our guide, leads us through the leafy, living jungle, where we spot blue monkeys and giant snails along the path. When we finally locate the group of 40 chimps, they go swinging through the high canopy, dangling from branches with crazy abandon. The chimps, whose diet includes leaves, caterpillars, and even other monkeys, hurl fruit down at us. They might be endangered, but we’re the ones in danger of getting peed on from above.

Robert points out a male chimp named Victor, chilling on a branch. An unselfconscious fellow, he begins to lick himself — the norm in this community.

The surreal vibe continues on our hike back. We stop for a group photo with a giant strangler fig tree, whose roots recall Angelina Jolie’s scenes at Angkor Wat in Lara Croft: Tomb Raider. When we emerge from the jungle and head to our van, fruit sellers approach, hawking several of Uganda’s 30-plus banana varieties. The chimps would be envious. Uganda grows more bananas than any other African country, and ranks second only to Brazil worldwide.

My appetite for wildlife sightings is unstinting, and with the “Big Five” animals, it’s a toss-up between lions and elephants as to which is most exciting. (The others are leopards, rhinos, and buffalo.) Queen Elizabeth National Park, Uganda’s second-largest national park, is home to up to 120 rare tree-climbing lions. They use the trees to target prey, avoid tsetse flies, and stay cool.

After waking up at 7 a.m. with a red orb sunrise, my group drives over to the park. En route, we pass two huge elephants in a field. A jolly warthog scuttles past, while women with buckets balanced on their heads wave to us.

We transfer into a UWA vehicle, featuring a pop-up roof for animal viewing. Escorted by local researchers, we follow curving dirt roads over the savannah, with the misty Rwenzori Mountains in the distance. Some lions wear radio tracking collars, which makes them easier to locate, although it also takes good timing, observation and luck.

Before 9 a.m., we luck out. Two female lions and two cubs feast on a warthog carcass near a cluster of cactus trees. It’s an incredible sight. We circle them from a safe distance, while vultures linger nearby, seeking leftovers.

Later, when we spot a male lion hiding inside a thicket, apparently hoping to meet a lady friend, a variation on a 1970’s Eagles hit pops into my head: “You can’t hide your lion eyes/And those bushes are a thin disguise.” He apparently agrees, since he finally roars at us (whoa!) and takes off. The researchers explain that he’s in another male lion’s mating territory. So that may have been wise.

Wildlife conservation wasn’t a priority in Idi Amin’s era, but when I visit the Gorilla Conservation Cafe in Entebbe, it’s refreshing to see what’s wisely being done to help my favourite Ugandan animals. For 30,000 Ugandan shillings (about $8 USD), you can buy a 500-gram pack of Kanyonyi Coffee Blend, with partial proceeds benefiting mountain gorillas.

The concept, spearheaded by Dr. Gladys Kalema-Zikusoka, is to encourage local farmers to produce coffee, build their incomes, avoid poaching in gorilla forest habitat, practice family planning, and focus on reducing diseases that can be transmitted to gorillas. “We decided to develop it as a global brand that can save the gorillas,” Kalema-Zikusoka says.

As I enjoy my coffee back in Vancouver, I hope Nyangoro and Muhumuzu have many peaceful mornings ahead in Uganda.

Check out our small group tours to Uganda here.