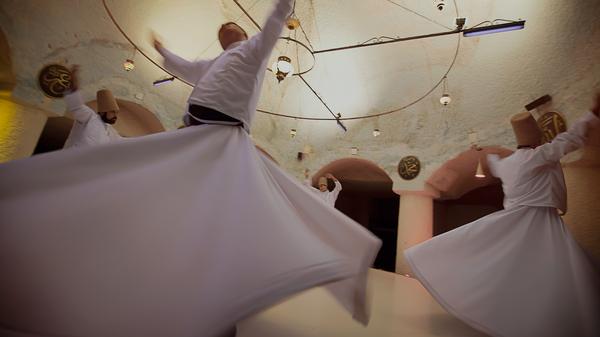 Take a look at the history behind the Whirling Dervishes in Turkey.

You’ve no doubt seen the graceful twirling “dance” of the Whirling Dervishes in action countless times before, but the origins and significance of the ceremony are just as fascinating as the performance itself. Why do they spin? And how do they do it without getting dizzy?

To understand, go to the source. The Mevlâna Festival is a weeklong sama ceremony observed by the Mevlevi Order, a Sufi sect based in the Central Anatolian city of Konya, Turkey. The Mevlevi – better known throughout the world as the “Whirling Dervishes” – adhere to the teachings of Jalāl ad-Dīn Muhammad Rūmī, a 13th-century Persian poet, philosopher, and mystic. Attended by upwards of 1 million people each year, the festival begins on December 10th and concludes on the 17th, the anniversary of Rūmī’s death. (This final night is often described as Rūmī’s “wedding night,” symbolizing his holy union with Allah.)

The significance of sama.

In Sufi tradition, the sama (“listening”) represents the adherent’s spiritual journey through the mind, through love, and finally, into enlightenment. Participants (samazen) symbolically turn towards the truth, cast off their egos and distractions, and arrive at a state of holy perfection (Kemal). The Mevlevi express this through the twirling dhikr (“remembrance of god”), a practice popularized by Rūmī himself. According to scripture, Rūmī became entranced by the percussive hammering and rhythmic prayers of apprentices working in a goldsmith’s shop near his home. The sound filled him with such joy that he began to spin on the spot, and through his dizziness felt closer to Allah than ever before.

A dance in four acts.

The dhikr is divided into four main sections. The first stage is the naat, in which a lone hafiz (a scholar who has committed the entire Qu’ran to memory) offers praise to Allah in either song or verse. The prayer is then followed by an improvised taksim played on a single reed flute, which symbolizes mankind’s separation from god.

Next comes the devr-i veled, a procession in which the samazen bow to each other and walk in single-file around the samahane (ritual hall). The bow represents the “divine breath” that is breathed into all living things. Each dancer wears a wide white tennure (a gown representing death), a black hirka (a cloak, symbolic of the grave), and a tall felt kûlah (a hat suggestive of a tombstone) pulled tight over his scalp to keep it secure. Once the circuit is completed, they shed their hirka and kneel.

The third act is the most compelling part of all: the Four Salams. Representing the sun, the seyh (an elder or cleric) moves to the centre of the group, who then rise and begin to turn in place using the balls of their left feet while simultaneously revolving around him. At first, the dancers keep their arms held tightly to their chests to symbolize the oneness of god, and as a kettledrum sounds to keep them in time, each dancer extends his arms outward with the right palm up to the heavens and the left one down towards the earth. The Four Salams represent the steps of the spiritual journey: recognizing god, recognizing one’s existence within god, the ecstasy of total surrender, and the peace that comes from divine unity. The seyh twirls only in the fourth salam, and always remains at the centre of the group. The dance concludes with another taksim.

The sama’s fourth and final section consists of a concluding prayer from the Qu’ran recited by the seyh.

The science of twirling.

Now for the burning question: How in the world do the Mevlevi spin for such a sustained length of time without getting dizzy? The truth is they do get dizzy, they just don’t show it. It takes years of training to perform the dhikr properly, and the performer must develop an incredibly keen sense of balance and physical awareness. Samazen do not “spot” when they spin like dancers or figure skaters, but rather keep their heads as still as possible to maintain as much inner equilibrium as they can. It’s tricky, but it can be done with intense practice.

Curiously, despite serving as one of Turkey’s most iconic cultural phenomena (UNESCO officially recognized the ceremony as a “Masterpiece of the Oral and Intangible Heritage of Humanity” in 2005), the dkhir’s status as a religious ceremony means it can only be performed for two weeks each year. When Mustafa Kemal Atatürk founded the secular Republic of Turkey in 1925, the Mevlevi and other religious orders were banned until 1954, when the Order was granted special rights to perform the sama in public as a cultural art form.

The irresistible force that convinced the government to change its mind? Tourism. Maybe travel really can change the world after all. Something to think about.

Want to see the Whirling Dervishes in action? _G Adventures runs a number of small group trips in Turkey encompassing a wide range of departure dates, and trip styles to cater for different tastes. _