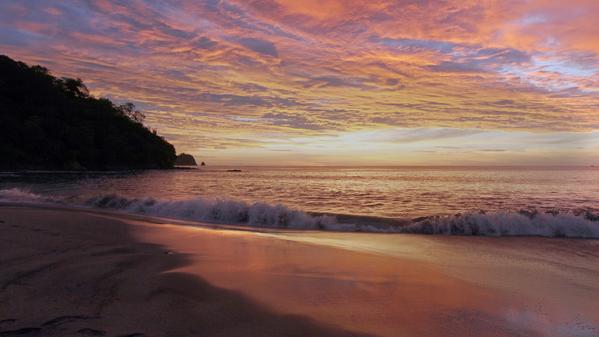 From stunning nature to delicious food, there's no shortage of reasons to put this country on the top of your travel list

Not sure whether a trip to Costa Rica is for you? Here are 10 reasons to consider it:

If you're a thrill-seeker or someone who craves adventure, Costa Rica is the place for you. The country is known for its zip-lining tours, whitewater rafting, kayaking, scuba diving, cliff diving, and sky diving, among other adrenaline-pumping activities.

Costa Rica is a great place for the unadventurous as well, or for those who just need a break in between adventures. With more than 1,000 miles of coastline, the country is home to some of the world's most beautiful beaches. (Word to the wise: If you are looking for lots of sun, avoid the rainy season, between April and November.)

Costa Rica is one of the top surfing destinations in the world. The water is warm year-round, but — perhaps counterintuitively — the rainy season can often be the best time to hang 10, as it isn’t as crowded. If you're new to surfing, there are plenty of surf schools.

Sloths — the slowest mammals in the world — can be found all around the country. Look up in the trees as you drive along the road, or hike in the jungles and you might just see one or two.

Costa Rica has its own delicious national cuisine, and the country is also a huge grower of coffee, bananas and chocolate. If you visit Quepos, be sure to take a tour at Villa Vanilla farms to see how they make chocolate as well as vanilla, pepper, cinnamon and more.

Costa Rica is known as the happiest country on Earth. A common saying among locals is “pura vida,” which means “pure life.” Everywhere you go in Costa Rica, you will be welcomed with a smile by the locals.

About 25% of the Costa Rica is made up of protected national parks and rainforests which hold 5% of the world's biodiversity.

Because of Costa Rica's volcanoes, the country has very rich and fertile soil which helps make it so lush and full of life. The volcanoes and surrounding areas are also popular areas for hiking, camping and mountain biking.

Costa Rica is full of cheeky monkeys who might steal your food if you aren’t watching. And if it's not the monkeys, it's the raccoons. There are lizards, geckos and iguanas all over the place, and Costa Rica is known as a great bird-watching destination, with more than 812 recorded species found there.

With many eco-friendly hotels and lodges across the country and tour operators attempting to be as low-impact as possible, they are well on their way to full sustainability. You can feel good about visiting.

Ready to travel to Costa Rica? G Adventures can get you there. Check out our small group tours to Costa Rica here.