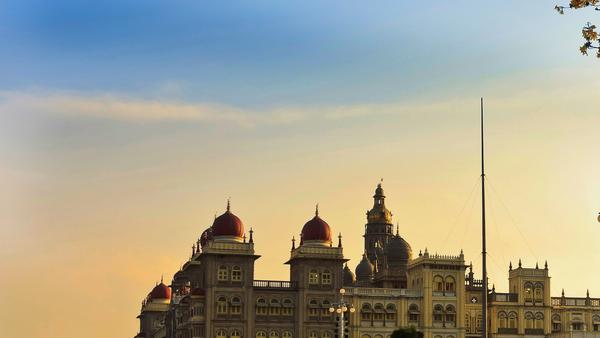 Trace the footsteps of visitors to this opulent royal residence, filled with stories of the Maharajas, clashing architectural styles and hidden secrets.

One of the most popular attractions in India, Mysore Palace welcomes over 6m visitors every year. It stands in the city of Mysore, named the 'City of Palaces' for hosting seven former royal houses.

The architecture of the palace eclectically blends Hindu, Muslim, Rajput, and Gothic styles. The building which stands today was designed by an English architect, Henry Irwin. Irwin was commissioned by His Highness Maharaja Krishna Raja Wadiyar IV to re-build Mysore Palace in 1897, after the original site was destroyed by fire. His design, completed in 1912, is a mesmerizing collection of gardens, courtyards and temples.

Serving as an escape route for the royal family, numerous secret tunnels snake out from Mysore Palace connecting to the nearby town of Srirangapatna, other palaces and private areas of the city.

G Adventures runs a number of departures encompassing a wide range of departure dates and activities to cater for different tastes. We’re thrilled at the prospect of showing you this big blue planet of ours — check out our small group trips to India here.