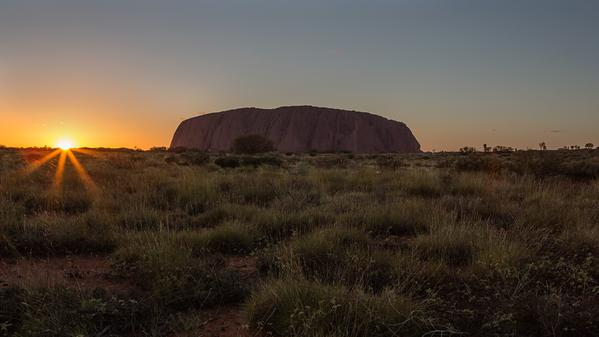 This is Uluru: At Australia's Red Centre

Explore Australia's Red Centre with a primer on all things Uluru.

I was a kid the first time I heard of Uluru, watching Meryl Streep in the 1988 film A Cry in the Dark. They called it Ayers Rock and it looked positively imposing—a smooth, long, low mountain rising out of the desert. It seemed foreign to me and very far away. I had no idea about the significance of this place, or of the culture that lives near and around it. They're called the Anangu, and to them, this is Uluru.

This place is one of Australia’s most recognizable icons. Brilliant red and surrounded by the flatlands of the Central Australian desert, Uluru draws 250,000 people yearly, to see it at dusk and sometimes at dawn. People come here to see the colours of sunlight that reflect off its surface, and simply to be in the company of its light and its shadow.

If you haven’t been to Uluru, I’ll wager it’s larger than you think it is, (but only if you haven’t been here). It rises 348m (1,142 ft.) above the plain that surrounds it, which is 50m (164 ft.) higher than the Eiffel Tower. Most of Uluru is beneath ground level, similar to how most of an iceberg is concealed beneath the water’s surface. What we see is, staggeringly, just the tip of Uluru.

Formally called an inselberg, (“island mountain”), Uluru was created up to 550 million years ago from individual sedimentary grains of sand being compressed into rock and much later pushed upward during a shifting of plates. Archaeological findings tell us Aboriginal people settled here over 30,000 years ago. It wasn’t until 1873 that the explorer William Gosse saw Uluru and named it Ayers Rock after South Australia’s Chief Secretary, Sir Henry Ayers. Then in 1985, the Australian government awarded ownership back to the Anangu people on the condition that they lease the land to Australia for 99 years. The government then formed Uluru-Kata Tjuta National Park—a vast public area that encompasses Uluru and another inselberg named Kata Tjuta, which at 546m (1,791 ft.) is nearly as high as Toronto’s CN Tower.

Since the 1950s when tourism started to take off, visitors to Uluru have loved climbing it—and who wouldn’t want to stand at the top, feel the hot desert wind and see the plains stretching out below you in a cinematic moment? Climbing Uluru however, while not outlawed, is discouraged by the Anangu. This is partly due to the fact that the climbing path crosses a highly sacred Anangu dreamtime track – a spiritual place beyond time and our physical world where the past, present, and future all exist at once. The Australian government has vowed to outlaw the climbing of Uluru, but no action has yet been taken.

Like all parts of the world, there are lots of ways to experience Uluru, and like all parts of the world, one of the best things you can do is Google it. Learn something about the history and culture of a place you’re visiting ahead of time. It will prevent you from arriving at the base of Ayers Rock “from the Meryl Streep movie,” asking when the climbing expedition starts.

G Adventures runs a number of departures Down Under encompassing a wide range of departure dates and activities to cater for different tastes. We’re thrilled at the prospect of showing you this big blue planet of ours— check out our small group trips here.