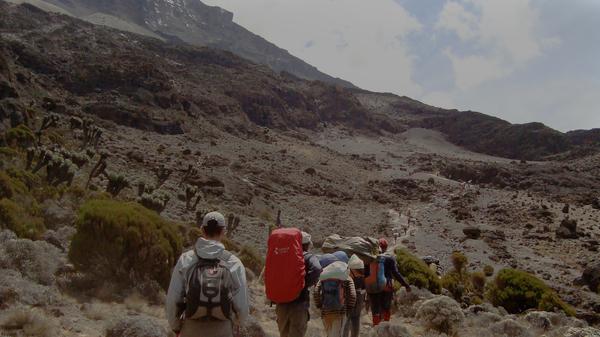 The Last 100 Metres to the Kilimanjaro Summit

With 100 metres to the summit, I slowly looked up towards a small group of people standing, cheering, high fiving. They were there, they'd made it. My head sunk towards the ground and I let out a long breath. Almost there man, one step after the other, breathe. My heart felt as if it was pounding out from my chest. I could feel it through five layers and waited a few seconds to see if it would subside. It did not. At 5,800 meters above sea level I walked at the pace of an Amazonian Snail. One shuffle after the other, I pushed towards the summit. It was 6:30am and the sun was just starting to breech the horizon. My head was pounding. I could literally feel the blood pulsing through my veins trying desperately to fuel my body and brain with oxygen. Almost there man, one step after the other, breathe. With my eyes fixed strait down, I continued my pace towards the voices ahead. Step, step, stop, look. I was getting closer.

At exactly 07:00am on April 14th, 2012 I made the summit of the highest freestanding mountain in the world and completed another life goal. I stood at the top of Mt. Kilimanjaro and the rooftop of Africa. Taking in a deep breath, I smiled to myself, you made it.

Slowly coming back into the moment I turned to see two of my team mates coming up behind me with our Tanzanian guide just behind them. I could see the agony of the climb in their movements.

Paul looked up and paused acknowledging my call, then after about twenty long steps he stood at my side with Javi and Kilian just behind him. “We made it man.” I said. And he laughed with a big smile of relief. “Yup.” There were four of us who reached the summit as a team that morning. Paul, Javi, Kilian, and myself. In total our G Adventures group was made up of six people, all of whom summited Kili that morning, however, on the long 7 hour assent we were split due to various degrees of altitude sickness. Everyone pushed themselves to the limit that day and accomplished something spectacular. Achievements like this make me think that truly our world is filled with extraordinary places and extraordinary people, travel is about embracing this fact and living life to it’s fullest everyday. Making the summit of Kilimanjaro was a truly life changing experience.

Our G Adventures Mt.Kilimanjaro crew consisted of five Brits, one Canadian, two Tanzanian head guides, one assistant guide, one cook, and twelve porters. The porters carried everything. Gear, sleeping bags, food, cooking equipment, extra gear, etc. etc. These guys are troopers. Our porters were super friendly, even if we didn’t see them that often, they would smile and practice what little English they had. Most guides start out as porters on the mountain. After a few years (and many ascents) they will usually become assistant guides and then after a year, fully fledged certified Tanzanian Mountain Guides helping people reach the summit of not only Kili, but often Mt. Meru and sometimes even Mt. Kenya. World class mountaineers.

The cook was amazing and we had three, two course meals daily, even if we weren’t that hungry. Overall the food was great. We had porridge, toast, sausages, coffee, eggs, and tea for breakfast. A packed lunch most days, but in one case a hot lunch of potatoes, pasta, and steamed vegtables. The dinners were different everyday with mostly a focus on carbs to keep us topped up on energy for the next day. There was always more than enough water and you can fill up at most stops along the route. Hats off to any Kilimanjaro chefs reading this post, you rock and thank you!

Our trek was five days and four nights in total. The route is called the Marangu and is one of the fastest with the nickname Coca-Cola for those who are familiar with the mountain. The success rate is 75% and the lowest of all routes. This is because you really do not have sufficient time to acclimatize properly and are bound to feel the effects of altitude on the summit attempt. This however does not seem to deter most people, including myself. If I were to do it again I would most likely go for the Machame Route, which gives you an extra two days to acclimatize and has a less intense summit attempt.

In total it took us 7 excruciating hours to reach the summit. I was lucky and had somewhat prepared myself for the challenge. With deep consistent breathing, sugar (in the form of Snickers) and lots of water I was able to make the 5,750 meter mark (Gilman’s Point) without any real tough effects of altitude sickness. The last 150 meters though really took its toll. I was exhausted and began to feel the effects quickly. At that point I had not slept in over 24 hours, and in that time frame, hiked 17km with a 2,000m vertical gain. My muscles were weaning, especially my legs. I needed to rest. It took an hour and a half to walk the 1km from Gilman’s Point to Uhuru Peak and the summit. My head began to pound and every ten steps I would stop to breathe, then continue, stop, continue. It was an incredible challenge to walk such a short distance. One you cannot prepare for, one you must only endure.

We had an incredible group with great guides. We shared laughs, tears, silence, sickness, and overall, the determination to complete a common goal, summit Mt. Kilimanjaro and reach the rooftop of the African continent.

I believe that endurance is the key to any physical conquest. As cheesy as it sounds, the trick is to force yourself to stick with it and attack the task at hand no matter how badly your body is screaming for you to quit. Conserve your energy and go slowly. It is not a race, and even if it was, the turtle will always beat the hare. Any high altitude climbing presents a different set of challenges to that of more technical climbs. With Kilimanjaro I think the best way to reach the summit is to pick your route accordingly and not underestimate the difficulties of walking at 5,895 meters above sea level.

"Almost there man, one step after the other, breathe."