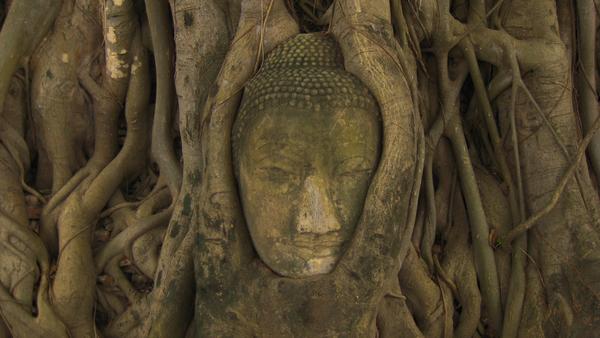 Make the trek from Bangkok to its predecessor for a glimpse of the power, beauty, and sophistication of the old Siamese Kingdom

The face of Buddha gazes serenely, its white stone nearly covered with dirt and moss from centuries of growth. It is so close to the colour of the thick tree roots that surround and entangle it, in fact, that the face would be easy to miss entirely.

In the storied Thai city of Ayutthaya, about 80km (50 mi) north of Bangkok, hundreds of such Buddha statues are embedded in the ruins that have grown up around the temples here. The former capital of Thailand, Ayutthaya was once an important and prosperous city in the 14th through 18th centuries, its palaces, temples, and monasteries were abandoned and left empty after an attack by the Burmese in 1767. Slowly, over the last 250 years, nature claimed the Buddhist buildings and statues until they became part of the landscape, at one with the jungle that encroached. Many of the Buddha statues are headless; many of the walls lean at alarming angles; temple spires and stupas simply defy gravity.

In a nation where wats (Thai temples) are everywhere — there are more than 40,000 in the country — these at Ayutthaya, along with the complex’s palaces, public spaces, Buddhist monasteries, monuments, and living quarters, hint at their long-ago grandeur amongst the grasses, vines, and trees that grow around and sometimes right through them.

Ayutthaya was actually the second capital of Siam, as Thailand was once called. It had been moved there from Sukhothai in 1350 because of its strategic location on an island surrounded by three rivers, where it could be more easily defended. Like the complexes of Angkor Wat, the capital of Siam was one of the world’s largest and most cosmopolitan cities of the time; a hub of international trade and economic power. Its elaborate grid of roads and canals were carefully planned, along with gold-covered temples and buildings of monumental structure and a highly advanced water hydraulic system.

The importance of this wealth can still be seen in the ruins that are Ayutthaya today. Even some of the original paintings still exist on underground palace walls. After initial excavation as an archaeological site, and then being designated a UNESCO World Heritage site, much care has been taken to restore, preserve, and reconstruct the remains of the once-great city. Wherever known ruins of the ancient city had been built over in modern days, they are now uncovered. A lot is known about the layout due to the extensive and accurate maps, along with historical records, created back when it was originally built.

In spite of its protected location and massive defenses, the Burmese army invaded in 1767 and razed the city to the ground. It was abandoned and never rebuilt, and the Siamese Kingdom moved to establish a new capital city downstream: present-day Bangkok. In fact, despite its massive size and modernization, it’s still possible to get a glimpse of Ayutthaya in Bangkok — as the new capital was built, there was a conscious effort to recreate the old one, emulating its architecture and system as much as possible. The full, official name of Bangkok — all 20+ words of it! — includes Ayutthaya as a tribute.

It’s a fairly easy day trip to Ayutthaya from Bangkok, reachable by train, car, bus, or the many tours that offer packages there. If you go on your own, it’s relatively straightforward to rent a moto-bike or tuk tuk driver for the day to make your way around. Note that few people speak English here, and many of the tourist maps given out are inaccurate, so these things can be a bit of a challenge.

Because it is now an archaeological site and the temples are no longer functional, there is no dress code, but respect for the local customs is still advised. Most of the structures that can be entered are free, although a few charge a small fee such as 50 baht. Some of the major sites to visit include:

• Wat Phra Si Sanphet, Sri Sanphet Road. This is the largest temple in Ayutthaya, used only for religious ceremonies. The royal palace can be accessed from here (though little remains of it).

• Wat Phra Mahathat is across the road, and while this temple is ransacked, the row of headless Buddhas is haunting. This is also where the Buddha head wrapped in the roots of a tree the can be found.

• Wat Thammikarat, U-Thong Road. One of the few working temples today, in spite of the missing roof and huge tree growing in its side. There is also a reclining Buddha hall.

• Phra Chedi Suriyothai, U-Thong Road. This is noted for the white and gold chedi that was built as a memorial to an ancient Siamese queen.

There are many other wats and sites to see, including the Phet Fortress, which has nice views of the river. Many of the artifacts and treasures recovered during the restoration process are on display at the Chao Sam Phraya National Museum in Ayutthaya, which is well worth a visit if you have the time.

Making the trek from Bangkok to its predecessor lets visitors get a glimpse of the power, beauty, and sophistication of the old Siamese Kingdom — along with a sense of the history and culture of Thailand.

G Adventures runs a number of departures in Thailand encompassing a wide range of departure dates and activities to cater to different tastes. We’re thrilled at the prospect of showing you this big blue planet of ours — check out our small group trips here.