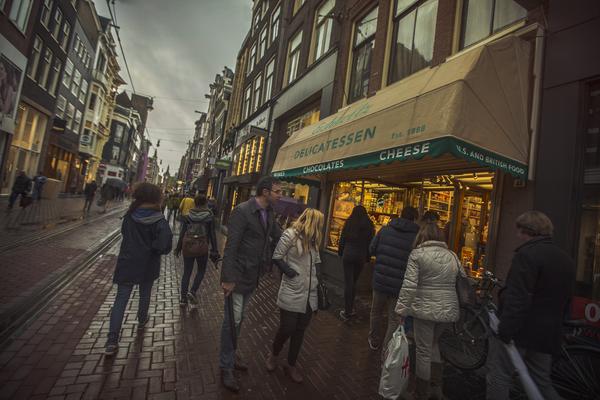 A sweet stroll through the delicious capital

by Tracey Lindeman Posted on 24 December 2018

Let’s be real: You do not travel to the Netherlands to have a five-star dining experience. With daily staples like pickled fish and meat and potatoes, Dutch food can be uninspiring.

Still, the Dutch are incredibly proud people. There’s a saying amongst people from the Netherlands — “If it ain’t Dutch, it ain’t much” — and this is absolutely true when it comes to snacks. Don’t let their cycling-honed physiques fool you. The Dutch snack hard, especially when it comes to sweets and deep-fried goodies.

Get familiar with these terms ahead of your next trip to Amsterdam: Appeltaart, hagelslag, bitterballen, kroket, poffertjes, pannenkoeken, drop, speculaas, stroopwafel, fritessaus and, if you’re going around the winter holidays, oliebollen. Hop on a bicycle and make your way around town to gain an appreciation for authentic Dutch food.

Apples and Indonesian spices (cinnamon, cardamom, nutmeg, ginger, clove) are the foundation of many a great Dutch dessert, with appeltaart reigning supreme. The first known recipe for appeltaart (apple pie) appeared in a Medieval Dutch cookbook in the early 1500s.

Five hundred years later, I chose a long layover in Amsterdam over a quicker return home from Europe just to visit Winkel 43 and enjoy their appeltaart. This bakery almost constantly has a line out the door, and it’s not just the usual suspects: Amsterdammers and tourists alike line up for this pie.

The Winkel 43 recipe is a well-kept secret, but there are a few obvious characteristics that set it apart. The spice-tossed apple pieces are piled high, enveloped by a rich, crumbly crust whose texture feels like a cross between cake and shortbread. The counterperson will ask if you want it with whipped cream. You absolutely do.

You might find the word “pannenkoeken” familiar — and that’s because it is. It refers to pancakes, a staple of Dutch life that is enjoyed at any time of day. These pancakes are nearly as thin as French crêpes and can have sweet or savoury toppings. Most Dutch pancake houses will serve just one plate-sized pannenkoek per order. Before you dig in, know that there is a particular technique to eating it: You must first use your fork and knife to roll the pancake into a narrow tube, then cut into it.

Poffertjes, meanwhile, are puffy mini-pancakes about the size of a large coin. An order of poffertjes traditionally comes dusted in powdered sugar, though some pancake houses offer a variety of toppings. Get the best of both pancake worlds at the canalside De Vier Pilaren (soon to be re-christened The Pancake Club).

Having a cookie with your coffee or tea is a Dutch tradition, and most cafés and restaurants are happy to oblige. Speculaas and kruidnoten are a popular choice; that aforementioned Indonesian spice blend is the foundation of these crisp, dark-brown cookies. Around the Christmas holidays, pepernoten (anise-based cookies) are also common.

Stroopwafels (“syrup waffles” in English) are a favourite, and perform best after a few minutes of sitting atop a steaming cup of tea or coffee. These aren’t particularly hard to find in Amsterdam, but quality may vary. If you want to make sure your stroopwafel is the best it can be, head to the Original Stroopwafels kiosk at the Albert Cuyp market.

Whichever cookie you opt for, dunking is highly recommended.

Black licorice is the cilantro of the candy world: You either love it or hate it. The Dutch really, really love it — especially when it’s salty. In the Netherlands, licorice (drop) comes in small, gummy-sized shapes and is sold throughout the country.

Meanwhile, another of the more prominent peculiarities of the Dutch diet is hagelslag. Hagelslag is chocolate sprinkles, which you eat by spreading across a slice of buttered bread. Folding your bread to trap the sprinkles is an acceptable practice. And good news: If you want to bring some home, boxes of hagelslag can be found in nearly every grocery store in the country.

Oliebollen literally means “oil balls,” but a better description is “best fritter on the planet.” These deep-fried delights typically feature chopped apple, plumped raisins and currants, lemon or orange zest and a dense leavened dough. People eat them by dipping (and re-dipping) into a bowl of icing sugar.

There is a caveat, though. These are traditionally served at New Year’s only, so timing is everything. During that time, oliebollen stands will pop up throughout the city, and bakeries will make industrial batches of them. According to a local newspaper’s annual nation-wide ranking of oliebollen vendors, the very best are in Rotterdam and in smaller cities. In Amsterdam, good bets are Hartog’s Volkoren and Gebakkraam Verwijk.

It’s truly something special to partake in this Dutch New Year’s tradition, but if the stars don’t align for you, try the year-round Oliebollenkraam Tuincentrum Osdorp stand.

Most people don’t love sweets as after-bar snacks — which is why you need to know about bitterballen and kroketten. These are different-sized variations of the same thing: meat (usually a beef or veal ragout) shaped into either a ball or cylinder, then rolled in bread crumbs and deep-fried.

Most Amsterdam bars and restaurants will have these on the menu. For the true late-night warriors, however, please allow me to introduce you to a great Dutch invention: Febo.

Founded in 1941, Febo is a fast-food chain unlike any other. Essentially, it is a room-sized vending machine filled with hot snacks. You walk in, pop change into a slot, then release your kroket (or other snack) from its warm holding cell. It’s not just drunk-people good, either; these kroketten are actually quite delicious.

Finally, you can’t leave Amsterdam without trying the city’s take on Belgian fries. These piping-hot potatoes are served in paper cones with a small wooden fork, and are doused in the sauce of your choosing. Vlaams Friteshuis Vleminckx is an institution, and serves 25 kinds of sauce ranging from satay sauce to curry ketchup. If you’re a first-timer, try plain fritessaus, a thick mayonnaise with 35 percent fat content.

There are Febos and frites stands throughout Amsterdam, particularly in busy nightlife areas. After all, the Dutch are nothing if not pragmatic.

Ready to eat your way through Amsterdam? G Adventures can make it happen! Check out our small group tours to the Netherlands.