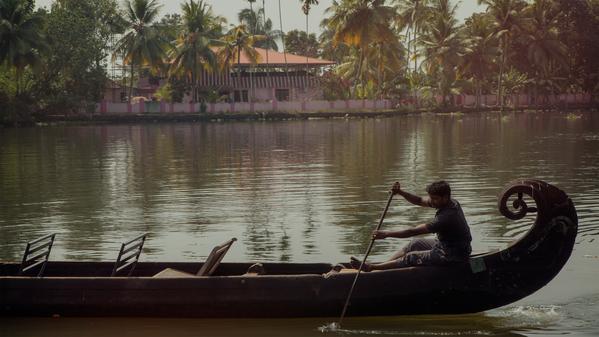 Indian cuisine varies no matter where in the country you happen to be. Here are five must-try dishes from the country's south

by Daniel Noll and Audrey Scott Posted on 13 August 2013

Vegetarian meals are the norm in the south, so much so that southern Indian food is a vegetarian’s dream. Instead of the cream usually found in northern dishes, South India goes for seeds, popped spices, tomatoes, and various dals (lentils) used as enhancements, accompaniments. Theirs is also a style of eating that incorporates light meals and snacks, known as tiffins, throughout the day.

Let’s dig into some of our favorite dishes from the southern Indian states of Kerala and Tamil Nadu. While these dishes are most common to and originate from the south, you can also find them throughout India, especially in the big cities, if you look and ask around.

There is something so perfect in the combination of the crispness and nutty flavor of a dosa (a thin, large pancake made from a batter of ground rice and urad dal) and the mildly spiced crushed potato and spice mixture inside (that’s the masala mixture).

Add to this the pails of sauce that circulate in a typical South Indian cafeteria called sambar (a slightly sour-savory sauce made from tur dal, tamarind, and vegetables) and various wet chutneys, including ones made with popped mustard seeds and ground coconut (white), chili/mint/coriander (green), and tur dal chutney (red).

How to eat a dosa: a dosa is traditionally eaten with the right hand (as in all proper eating in India).  Grab a bit of thin pancake with the masala inside, scoop up a sambar inside and send it with a push your right thumb it into your mouth. Don’t be afraid to ask for a fork and spoon if you feel uncomfortable digging in with your paws. Note: it tastes better when eaten with your hands!

Thalis are like many little meals in one, a little buffet on a banana leaf or metal tray. The idea: salty, sweet, sour and bitter merge in the mouth in one sitting.

A large pile of rice forms the base and smaller piles or tin cups of curries, chutneys, and Indian pickle are placed all around. Top it off with a chapati flat bread or papadum (fried bread) and you are all set.

Typically, a southern Indian thali is bottomless, all-you-can-eat. Just keep asking for more rice and curries until you can go no further.

Think savory, fried and dense donut and you’ve got a vada. It’s the lentil and gram flour with the occasional dose of potato mash that provides a vada with its heft. It can be eaten straight as a snack on the street or taken in a restaurant with the familiar sides of sambar and wet chutneys.

Savory, steamed saucer-like cakes made from a batter of fermented black lentils and rice. The result is soft, almost fluffy. And, you guessed it – they are served with the side pails of sambar and wet chutneys.

When faced with the choice, we’ll choose a dosa or vada to an idli, but don’t hold that against them. Idli are especially popular in the morning and appealing, particularly just after they’ve been freshly steamed.

We usually found biryani (rice with meat, vegetables and spices) in the Muslim neighborhoods of southern Indian towns. Biryanis are often served with mutton, but there are vegetarian versions, too (especially when the local mosque is serving biryani for free to celebrate a festival).  Biryani is more than just some rice with meat; the taste can be made surprisingly complex with combinations of cinnamon sticks, star anise, cumin, cardamom, and even a dash or two of coconut milk.

You can spot the biryani shops: men out front stirring a massive pot of colorful rice, stewing it all until the spices have had a chance to settle in.

When you are filled to the gills with all the goodness described above, take a glass of Indian-style coffee or milk chai (tea) served with lots of milk and sugar as a dessert. Indian coffee (or chai) wallahs will toss the piping hot milk and coffee between two metal cups until their concoction is well-blended and at the perfect drinking temperature.

It’s not just about the beverage, but it’s about the show.

So next time you are in India or on the hunt for Indian food at home, be on the lookout for South Indian food. The dishes may not be as creamy as your favourites from the north, but the richness of the spice combinations mean you won’t miss that. And like us, maybe you’ll find that the more you eat it the more you’ll grow to love it.

Note on eating safely in India: South Indian restaurants always have a sink at the back to wash your hands. Be sure to do so before and after your meal. If you’d like to know how to avoid getting sick while traveling in India, this is rule #1. For more on how to travel in India without hugging the bowl, check out these food safety tips.

G Adventures runs a number of departures in India encompassing a wide range of departure dates and activities to cater for different tastes. We’re thrilled at the prospect of showing you this big blue planet of ours — check out our small group trips here.