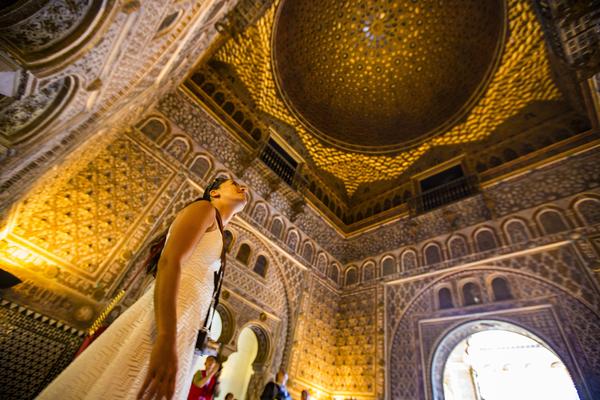 Secrets of Seville: What to do in Spain's Andalusia region

Andalusia is rife with reminders of the forces and struggles that have shaped our world, for better and for worse

Every February, my best friend Carmen and I try to plan a few days of vacation together somewhere in Europe while she has a week off from her teaching job. I'm based in New York City; she lives in Scandinavia and has a small child, so it makes more sense for me to come to her (sort of) than the other way around. It’s also the off-season for tourism, which makes a trip to the comparably mild climes of southern Europe affordable and less hectic than when the whole of northern Europe descends come June and July.

This year, Carmen suggested we go to Seville, Spain, in the country’s far southern region of Andalusia. The food would be great, the sun would be bright, and the costs would be low. We might even get a day or two of t-shirt weather out of it. With Seville as our anchor, my boyfriend and I built a 10-day Andalusian highlights tour around our three days with Carmen and our mutual friend, Tim. Little did we realize that, in addition to all the tapas we could stomach, we’d be digesting a condensed history of the western world.

Andalusia is probably best known to outsiders as the birthplace of flamenco, a style of music and dance that emerged from the co-mingling of marginalized Sephardic Jews, Roma, and Moors who’d sought refuge from persecution in the same desolate hills. Andalusia is also renowned for its Arab architecture, centuries-old reminders of the region as the last holdout of Al-Andalus — the medieval Muslim kingdom that at, at its peak, included most of today’s Portugal and Spain. But the history doesn’t end there.

From Roman ruins to the spot that launched Christopher Columbus’s fabled voyage to the Americas, Andalusia is rife with reminders of the forces — and power struggles — that have shaped our world, for better and for worse. In no particular order, here are nine places to visit on your magical history tour:

1. The Alhambra: Granada was the final Moorish Emirate to be reconquered by Christian Spain in 1492. Its grand palatial complex, the Alhambra, was constructed in the mid-13th century for the last Muslim emirs in Iberia and described by Moorish poets at the time as “a pearl set in emeralds.” After the Christian Reconquista, it became the royal palace of Ferdinand and Isabella.

Because of its (well-earned) must-visit reputation, tickets for the Alhambra are restricted to a single day, indicated on the ticket, and should be purchased well in advance. For visitors looking to try their luck on a last-minute booking: the museum releases a small block of tickets that can be purchased online after midnight for a next-day visit.

2. The Alcázar: Game of Thrones fans will likely recognize Seville’s 14th century palace, which served as the television setting for the Water Gardens of Dorne. Considered one of the foremost examples of Mujédar architecture — an Arab-inspired aesthetic developed after the Christian reconquest of Moorish Spain — was built on the site of an Abbadid Muslim fortress for the king Peter of Castile. In keeping with the colonial tradition of maintaining and repurposing some architectural features of whatever population they’d just conquered and built over, an original Moorish building can still be found in the Patio del Yeso, an exquisite courtyard in the Alcázar complex.

3. The Mezquita: In 784, when Córdoba was the capital city of the Emirate of Córdoba, ruler Abd al-Rahman I ordered the construction of a Great Mosque. The project would take some two centuries, and the labour of thousands of artisans, to complete. After the Reconquista of Córdoba in 1236, the building entered its current iteration as a Roman Catholic church. But, save for the insertion of a 16th century cathedral nave, little effort has been made to mask the building’s Islamic origins.

Now over a millennium old, the building has lost none of its gasp-inducing power. 856 columns support red and white striped arches lain out in dizzying rows. Quranic inscriptions, rendered in Arabic script, decorate the walls and ceilings. And a stunning mihrab — the original mosque’s prayer niche, gilded and ornate — remains carefully preserved.

4. The Ruins of Itálica: Just northwest of Seville sits what’s left of the ancient Roman city of Itálica. One of the earliest Roman settlements in Spain, the city was founded in 206 BC and was the birthplace of the Roman senators Trajan, Hadrian, and possibly Theodosius. Visitors can check out the excavated remains of several large Roman mansions, Roman baths, a temple of the Emperor Trajan, and bits of what was once the Roman city’s sewage system. Another point of interest, especially for Game of Thrones viewers: the remnants of a 25,000-seat Roman amphitheater, which served as the filming location for the dragon pit in Season 7.

5. The Tomb of Columbus: As most history buff travellers will likely tell you, there’s something morbidly fascinating about visiting the final resting place of an historic figure, centuries after they left their indelible mark on the world. In Seville, visitors can convene with the remains of Christopher Columbus and decide whether or not to give his tomb a stern stink-eye for containing what’s left of the person who essentially kicked off European colonialism in the “New World.”

No matter what you make of his legacy, it’s tough to argue the impact of Christopher Columbus’ 1492 voyage. Bankrolled by the consolidated mega-kingdom of Queen Isabella of Castile and King Ferdinand of Aragon, the Italian mariner had been tasked with charting a new trade route to India. He set sail from Palos de La Frontera, some 100 kilometres southwest of Seville, got lost, and the rest, as they say, is history.

Since 1898, Columbus’ remains have been enshrined in the Catedral de Sevilla. While the Dominican Republic insists that Columbus’ body never left the Caribbean island after his final voyage to Hispaniola, DNA evidence confirmed in 2006 that at least some of Columbus’ remains made their way back to Seville.

6. Cueva de Los Letreros: Just outside the town of Velez Rubio in Almería province, some two hours northeast of Granada, sits a network of caves. Inside, visitors can find impressively well-preserved sketches of animals, symbols, and figures from before 5500 BC. One of several UNESCO-protected cave painting spots in the region, this one is arguably the coolest; one of the symbols depicted within, a stick-person called an indalo, is the official symbol of Almería and believed to be one of the longest continually used symbols in the history of humanity.

7. Any flamenco show, in any city (really!): This may seem like an obvious recommendation, but it must be said: no visit to Andalusia is complete without taking in an evening of flamenco song and dance. Flamenco performances can be found in virtually every Andalusian town, from homey backstreet tablaos to grand dinner theatre spectacles geared for the tourist set. Some are better than others, but there’s no better way to appreciate how Andalusia’s rich and multicultural history of lives on.

Check out our small group tours to Spain here.