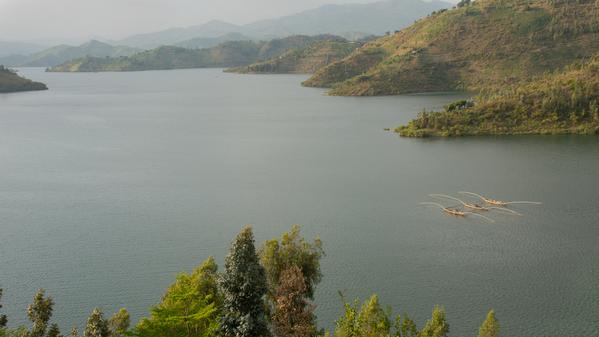 Wanderers-in-Residence Dan and Audrey discover what makes this much-maligned country so unique (and it's not just the gorillas).

by Daniel Noll and Audrey Scott Posted on 03 July 2015

Been there? Done that? Think again! Reignite your #senseofadventure with five of the world’s underexplored destinations—handpicked for those who’ve been around this wonderful rock we call Earth once or twice. Explore them here.

We visited Rwanda just after the 20th anniversary of the 1994 genocide. When we shared our plans to travel there, the response we often received with a turn of the head was, “But what about the genocide? Are you sure that it’s safe?”

From the outside looking in, the question is a reasonable one. However, our experience on the ground travelling in countries that have known turmoil and violence has taught us that destinations, people, and cultures are not static. They change, they grow, and they reinvent themselves in the face of – and often in response to – atrocity.

Rwanda is one of those places; one that took an opportunity in the aftermath of horror to reimagine itself. In doing so, it continually surprises its visitors. The revelations sometimes come in the form of small details, other times cast in wide-ranging public policy decisions.

Here are a just a few of the things that we discovered about Rwanda that might surprise you.

Rwanda: The Switzerland or Singapore of Africa?

The first thing that really struck us about Rwanda was how clean, calm, and organized everything appeared to be, from the streets to the markets. After spending the previous weeks in Uganda (a veritable sea of humanity and cacophony) it felt as though we’d stepped into the tidiest pocket of Africa.

Rwandan life moves at a slower, more deliberate pace. Not only are there rules, but those rules also appeared to be followed, respected, and enforced. Even all the Rwandan motorbike taxi drivers carried two helmets – one for the driver, another for the passenger. Not only that, but everyone uses them, which is virtually unheard of in the other areas of East Africa where we had recently travelled.

Admittedly, this was a vastly different image of Rwanda than the one we carried into the country with us when we crossed the border. This emphasis on organization and tidiness surprises most people when we share it with them. But as we spoke with Rwandans and expats living in Rwanda, the rules begin to appear in patterns and to make sense. In the aftermath of the genocide, what the country needed most was a feeling of security and stability. If it didn’t have that, how else would its people be able to pick up and rebuild?

Today, order and organization have become defining characteristics of the country’s identity and way of being in the 21st century.

Before we boarded the bus from Uganda to Kigali, the Rwandan capital, other travellers warned us: “Don’t carry any plastic bags with you. They’ll take them away at the border.”

We thought they were joking.

We’ve crossed our share of borders and experienced deep searches for contraband before. While it’s not uncommon for border guards to rifle through your bags as you enter their country in search of things like alcohol, drugs, and banned fruits and vegetables, Rwandan officials instead focused their hunt on plastic bags. And they were serious about it.

When a Rwandan border official found a plastic bag stuffed into a corner or pocket of a backpack, sometimes with a snack inside, other times with dirty laundry, she asked us to remove the contents and hand over the plastic bag for disposal. Although this was an odd experience and a bit of an inconvenience, we were happy to comply, particularly once we understood that Rwanda was hoping to avoid the plastic-bag ridden landscape seen in so many other developing countries.

Rwanda was the first country in the world to ban plastic bags. They did so in 2006, and you can see the impact as you travel around the country today. The countryside and cities are remarkably and refreshingly trash- and plastic bag-free. It’s a sight to behold, truly. This nationwide ban on plastic bags is something that much of the world could learn from and aspire to.

Whenever I met a Rwandan and wished to talk or ask a question, I would usually begin with: “Parlez-vous français? Do you speak English?” Older Rwandans often replied in French. Younger folks, in English. Here’s why.

Until 2008, that is. Overnight, the government declared English the country’s official language in schools. With the stroke of pen, the entire education system changed, just like that.

Why the switch? English is arguably a more universal business language and Rwanda is surrounded by English-speaking neighbours. Sharing a spoken language helps to promote trade and exchange, both within Africa and across the world. The country is also trying to position itself as a technology and IT powerhouse, a competitive landscape in which English is arguably dominant.

For a while, this meant linguistic confusion in schools because of a lack of trained English teachers. But we found that many young Rwandans were picking up English quickly. Over time, the language level will improve throughout the country. Until then, it’s worth brushing up on your French before you go.

Each month, all Rwandans are called upon for a day of mandatory community service, referred to as umaganda, meaning “contribution” in Kinyarwanda. This monthly day of service brings people together to contribute to public projects like school renovations, street cleaning, public-home building, and other feats of community participation and creation. In fact, Rwandan citizens that don’t show up for umaganda can expect a fine.

In addition to contributing to cleanliness and order, these days of community service are also meant to bring people from all segments of society and from all socioeconomic groups together to work on community projects. The aim: to know and to feel a connection to your neighbours and to your government officials.

Imagine what might happen in your community if it featured a day of public community service for the public good. Would it even be possible?

Most travellers who visit Rwanda intend to see the mountain gorillas that live wild in Volcanoes National Park. This is one of the few conservation success stories in the world where it is believed that endangered animal populations have increased due to government efforts. Since 2003, the population of mountain gorillas has increased over 26% despite the continued challenges of poaching and civil conflict in the region.

Each year, Rwanda celebrates its baby gorillas by having an official naming ceremony, referred to as kwita izina, in which local citizens and international guests are chosen to give names to all the gorillas born in the previous year. The ceremony has its roots in a traditional Rwandan baby-naming practice for humans, but this new tradition has been adapted so as to honour these animals and demonstrate nationwide support for and attention to the country’s conservation efforts.

So here’s the big question: if you could give any name to a baby gorilla, what would it be?

Travel is about peeling back the layers of history and culture in way that we witness and experience firsthand a destination and its people. In Rwanda, it was no different.

G Adventures runs a number of departures in Rwanda encompassing a wide range of departure dates and activities to cater for different tastes. We’re thrilled at the prospect of showing you this big blue planet of ours — check out our small group trips here.