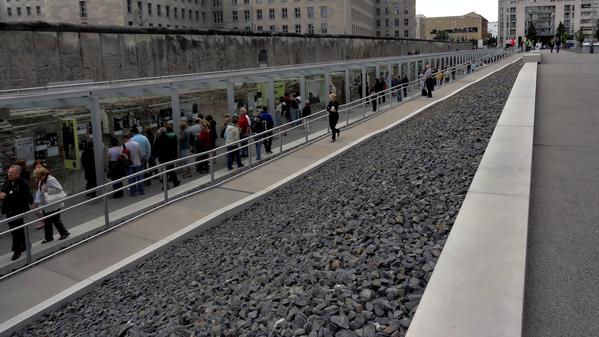 Remembering the Fall of the Berlin Wall

Take a look back at the barrier that kept East Germany from experiencing freedom for over 28 years.

There are a few events that changed the world forever: Neil Armstrong taking his first steps on the moon; September 11, 2001; and of course, the fall of the Berlin Wall. These historical moments will forever be etched in the minds of the people who experienced them, as they changed the course of our world significantly. So in honour of the 25th anniversary of the fall of the Berlin Wall, let’s take a look back at the barrier that kept East Germany from experiencing freedom for over 28 years.

August 13, 1961: Berliners awake to a barbed-wire wall constructed by the German Democratic Party (GDR), effectively dividing in two both the country and the city.

August 17, 1962: East German teenager, Peter Fechter, is shot and killed by East Berlin guards. American soldiers are unable to retrieve his body because it lies on Soviet territory, angering many Germans who later protest in his honour.

1971: Dr Dietfried Mueller-Hegemann discover many of his patients are suffering from a psychological illness called Wall Sickness (Mauerkrankheit). Symptoms include being afraid of confined spaces and crowds, depression, delusions of persecution, and suicide attempts. He flees to the west later that year.

1975: The wall goes through another renovation. The concrete slabs become 12 feet tall and 4 feet wide, making it nearly impossible to break through to freedom.

September 16, 1979: Hans Strelczyk and Gunter Wetzel get creative and build their own hot air balloon and float over the wall to West Berlin.

1980: The Berlin wall goes through its final renovation. It is now estimated that over 300 watchtowers are built, housing guards who are instructed to shoot anyone trying to cross to the west.

June 12, 1987: U.S. President Ronald Reagan utters his famous words at the Brandenburg Gate, “Mr. Gorbachev, tear down this wall!” during his speech to over 45,000 West Berliners.

July 19, 1988: Bruce Springsteen plays a rare show in East Germany. Communist authorities approve the concert in hopes it will relieve tension in the East, but instead it gives citizens a taste of the West. They want more.

February 6, 1989: Chris Gueffroy is the last person shot and killed trying to cross the wall. It is estimated that in total 136 people died trying to flee to freedom.

November 4, 1989: The Alexanderplatz demonstration (a pro-democracy protest) attracts over one million East Germans demanding the wall come down.

November 9, 1989: East and West Berlin finally reunite as the wall begins to fall. East Germans are finally allowed to leave and travel freely.

December 22, 1989: The Brandenburg Gate (Berlin’s most historic landmark) officially reopens, further establishing the reunification of the East and West.

December 31, 1989: American television actor David Hasselhoff, long loved by the German people, sings “Looking for Freedom” from the top of the Berlin wall.

October 3, 1990: The Checkpoint Charlie booth (the boarder checkpoint between East and West Berlin) is officially removed, and is now on display at the Allied Museum.

1990: After the fall of the wall, over 118 artists from all over the world paint parts of the wall in order to bring awareness of this historic time. The East Side Gallery is born.

If you remember where you were the day the Berlin Wall fell, or were too young to experience it first-hand, take a moment to reflect on how the fall of this barrier reinforced the importance of freedom. Many of our world’s most historic events take place in honour of protecting Freedom. As a Canadian, I am lucky to experience it every day.

So tell us, are there any world events that you’ve experienced that you will always remember? We would love to hear about them!

G Adventures runs a number of trips to Germany with a wide range of dates and activities to cater for different tastes. We’re thrilled at the prospect of showing you this wonderful planet as you’ve never seen it — check out our small group trips to Germany here.