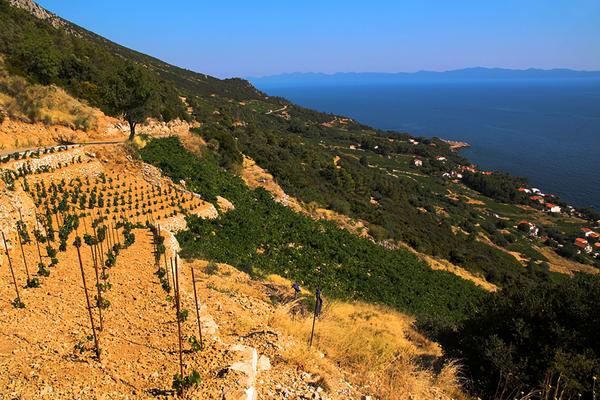 Pelješac, just outside of Dubrovnik, is a little slice of Adriatic heaven

...featuring some of the best wine in Europe

With more than a million tourists pouring into the ancient walled city of Dubrovnik every year, the medieval gem has been getting crowded. However, few visitors know that there’s a magical peninsula an hour’s drive from Dubrovnik, that’s ripe with cockles, wine, windsurfing and ancient ruins. Once you’ve soaked in Dubrovnik, skip the tourist traps. Instead, explore Pelješac’s bounty where food and fun are found in equal measure. Here are five reasons why this idyllic peninsula is worthy of a place on your Dalmatian itinerary.

The olive grove-dotted hillside plunges down into the azure Adriatic, where neat rows of mussels and oysters grow, bobbing with the tides. The southernmost tip of the peninsula, between Pelješac and the mainland, boasts a bay with Dalmatia’s best shellfish. Underground springs dilute the saltwater here, producing a microclimate ideal for growing sweet, meaty cockles. For a casual shellfish snack pop into either Bota Šare or Kapetanova kuca (both located along the seaside promenade in Mali Ston), as early as 10:00 a.m. they’re happy to pop open bivalves for travellers en route. Should your day be less rushed, stop by one of the many moored fishing boats eager to take visitors out for a tour of the oyster beds. Expect copious amounts of homemade wine and shellfish plucked fresh from the sea.

Dubrovnik might boast about its walled-city status, but Ston’s 5.5 kilometre-long walls — which runs from the seaside up the steep mountainside and over to its sister city Mali Ston (“Little Ston”) — make it one of Europe’s most impressive still-standing fortifications. The walls offer panoramic views of the sea and of Ston, a handsome medieval town with a population of 2,400. Masochists sign up en masse for the Ston Wall Marathon, a gruelling uphill endeavour under the still-scorching September sun.

Neither gold nor jewels led to Ragusa (Dubrovnik’s old city state name) building the walls that encircle Ston. The precious item du jour was salt. Here you can find Europe’s oldest still working saltpans. During the harvest season (July and August) intrepid, budget-conscious travellers can give up a half-day’s hard work of shoveling salt in exchange for free room and board. The saltworks even organizes activities like volleyball on a salt court, although your spike might be a bit wobbly after heaving 30 tons of sea salt.

When the fishermen come home early in the morning, the narrow channel between the island of Korčula and Pelješac looks glassy enough to skate on. Don’t let deceptively calm coast fool you: the waters can become ferocious, and for windsurfing enthusiasts: that’s a very good thing. Come 4 p.m., a wicked wind cuts through here, whipping up whitecaps and sending windsurfers careening across the channel at breakneck speeds (the mistral wind can reach up to speeds of 70 kilometres an hour). Whether you’re a competitive windsurfer or a total novice, this is a great spot to ride the breeze with rental shops and wind surfing schools aplenty. Or, kick back at one of the many beach cafes and enjoy the show.

“During communism, there were only two types of wine in Yugoslavia: white and red,” says Ivan Miloš of Vinarija Miloš, while pouring a crisp rosé. Today, there are dozens of wines being produced on this 65 kilometre-long peninsula, which has become a burgeoning wine region attracting international attention for its many biodynamic wines grown on some of the most challenging terrain imaginable: steep, red-soiled slopes that descend at a daunting 45-degree angle into the sea.

Vinarija Miloš was among the first wineries in the region to begin private wine production after communism ended. The modest winery — located in the family’s century-old home — turns out rave-worthy wines. Pop by for a tasting, stay for the handsome brothers, Ivan and Josip Miloš, who will happily educate you on the virtues of the region’s indigenous grape, plavac mali, or “little blue,” a Zinfandel relative.

For generations, local wine makers have been growing plavac mali, but the agro-tourism industry here is still green. Not-to-be-missed wineries embracing viticulture culture include Korta Katarina and Saint Hills. At Korta Katrina enjoy fresh focaccia from their kitchen while sipping on spicy reds in a stunning tasting room that overlooks the Adriatic. Inland, Saint Hills is a relative new comer to the region, with a French winemaking pedigree (thanks to oenologist Michel Rolland). This stunning property, with its lavender gardens and wisteria trellises, is a delight to explore, but the Saint Hills Treasury, a subterranean aging tunnel reserved for only the most esoteric of vintages, is truly spectacular.

Thinking of a trip to Croatia? G Adventures can get you there. Check out our small group tours to Croatia here.