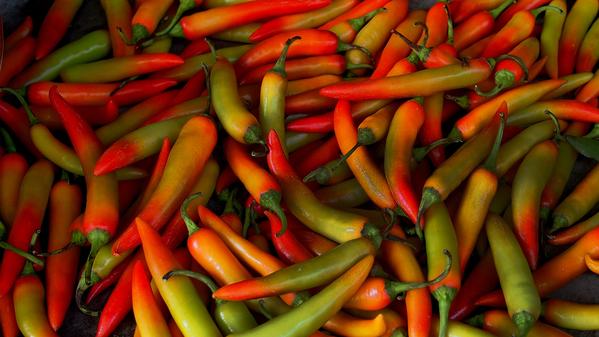 Wanderer-in-Residence Jodi Ettenberg explores the history of the chili pepper in this latest installment of her mouth-watering series.

According to the Guinness Book of World Records, the hottest chili pepper in the world is the Carolina Reaper, with a measure of 1,569,300 Scoville Heat Units (SHU), a measurement that quantifies spiciness via the concentration of capsaicinoids in the pepper. For reference, bell peppers have an SHU measure of 0, and Tabasco sauce measures in at around 2,500 SHU, making the Carolina Reaper very deserving of its name.

SHU measures capsaicinoids because it is the capsaicin in chili peppers that gives them their heat, and can irritate the skin and the eyes and even cause swelling in lung tissue if ingested at high doses. Capsaicin is what makes the chili so beloved in many countries around the world, adding a fiery layer to national dishes, and causing those of us who are not used to high levels of spiciness to break out the tissues.

So how did this fruit end up in so much of the world’s food? The story takes us to Central and South America, where the chili originated. Though the chili pepper is an integral part of many current Asian cuisines, archaeologists estimate that they were farmed between 5000 BC and 3400 BC in Meso-America, making it one of the oldest cultivated crops. Early reports from conquistadors cited a large presence of chilies in Aztec and Mayan traditions, used not only to flavour food but also to fumigate houses and to help cure illness.

In 1492, Columbus set out in search of what is now known as Asia, hoping to find riches to take with him back to Europe. Among his wish list was “black gold,” black peppercorns that originated from the Malabar Coast in India that had become so precious by trade by the Middle Ages that they were used to pay rent or salaries. When the powerful Ottoman Empire cut off the routes to black pepper and other important products and spices, Columbus sought a different path to South and Southeast Asia. He wanted a shortcut not only to pepper, but also to the Moluccas, the “Spice Islands” of Indonesia, which offered up nutmeg, mace and cloves.

As we learned in school, Columbus found the Americas and the New World instead of Asia. And there he came across the area’s many strange crops — tomatoes, corn, peanuts and chocolate among them. While these foods can be the subject of a future “Origins of Food” series, on his voyages Columbus also discovered the subject of this one: the spicy red ají.   He named this strange plant “pepper" (pimiento), after the black pepper that he was so desperately seeking on his journey.

As we know, Columbus never found the East Indies — even if he maintained that he did. But in naming the chili a pepper he created a very confusing labeling system for a plant completely unrelated to his desired black gold. The chili pepper belongs to the capsicum family, of which there are 27 species in total, but only half of them are used or cultivated by humans. Among them are the many varieties of chili peppers, bell peppers and more. Capsicums are part of the broader nightshade family, which include tomatoes, eggplant, potatoes and tobacco. The “chili” in chili pepper is derived from Nahuatl, an Aztec language. (Source).

The Rapid Spread of Chili Peppers

Columbus was the first step in the spread of the chili, which were subsequently scattered in an astoundingly broad diaspora. As the editors of Chilies to Chocolate note, “so swiftly and thoroughly did the chili pepper disperse that botanists long held it to be native to India or Indochina, but all scholars now concur that it is a New World plant with origins in South America.”

The resilient and popular fruit was an easy choice for Columbus’ cargo, since it dried out and could keep for months, crinkled and flat. The Spanish were not interested in cooking with this bright new flavour, however. "On the Iberian peninsula," writes Lizzie Collingham in Curry: a Tale of Cooks and Conquerors, "chilies were grown more as curious ornamental plants than as sources of a fiery flavoring."

Under the leadership of Alfonzo de Albuquerque, the Indian city of Goa fell to the Portuguese in 1510. Located in the spice-rich Malabar Coast — black pepper but also ginger and cinnamon and much more — the strategic city gave the Portuguese control over the spice trade. These important spices were sent to Lisbon in exchange for copper and silver. In the years that followed, New World goods and foods were funneled through Portuguese shipping routes that included Brazil and India but also the Portuguese Western African colonies. Chili peppers were shipped out of Brazil so regularly that by the late 16th century they were known in Goa as "Pernambuco Peppers," named after an area in Brazil. (Source). From Goa and other Portuguese colonies, chilies made their way into Asia and far beyond.

The most fascinating aspect of the chili pepper’s spread to me is how modern language has reflected the adoption of this modern fruit. In 2015, the chili is a huge part of many Asian and Indian regional cuisines. From sambal (a fiery condiment) in India to spicy tom yum soups and som tum salads in Thailand, you can’t miss its role in local dishes. But before the chili made its journey across the Atlantic, the word did not exist in the countries that now use it frequently. As the authors of Chilies to Chocolate: Food the Americas Gave the World note, “No Old World language had a word for chili peppers before 1492.”

Next time you take a bite out of a spicy dish, think not just about that buzz on your tongue and the sweat on your brow, but also the long journey of the chili pepper and how 500 years ago many of the cuisines that use it obsessively did not even know it existed.

• Food: A History of Taste, by Paul Freedman

• Spice: A History of Temptation, by Jack Turner

• Curry: a Tale of Cooks and Conquerors, by Lizzie Collingham

G Adventures runs a number of departures all over Central America and Mexico encompassing a wide range of departure dates and activities to cater for different tastes. We’re thrilled at the prospect of showing you this big blue planet of ours — check out our small group trips here.