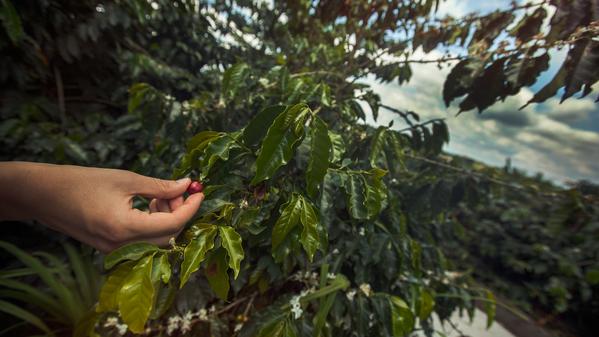 On the Coffee Trail: The origins of the world’s favourite drink

Grab a cuppa and come around the world with us as we check out the places where the best beans are grown.

For many travellers, coffee is what makes the world go ‘round. It helps reset the body clock and get you up in time for that 5am cross-country train. And while for some the on-the-road coffee experience may be waking nightmares of badly lit diners serving bottomless cups of recycled black sludge, nearly every city in the world has a thriving barista scene if you know where to go.

Today, huge sections of the internet are devoted to people arguing over the best place to find an authentic cup of joe; often made by a bearded hipster who would rather remove their own eyelids with rusted pliers before serving anything pre-ground. However, if you really want to know which country grows the best beans, you need to get off the internet and go exploring for yourself.

Coffee beans are grown in some of the world’s most spectacular locations. Often termed the “Bean Belt,” the world's biggest coffee producers are typically located in tropical countries close to the equator. From Brazil, to Ethiopia to Indonesia, where your coffee beans come from is a story in itself.

Indonesia: where even a bad cup of coffee isn’t bad

Coffee plants were introduced to Indonesia by Dutch colonists in the 17th century, and while the country was at one stage the world’s leader in coffee bean production, these days the archipelago is home to mainly small dry-process coffee farms that produce specialty beans. Sumatra’s Mandheling coffee is sold across Europe and North America and is known for its subdued acidity and almost chocolate-sweet flavour. Grown at elevation in the rich soils near Padang in west-central Indonesia, the coffee is named after the north Sumatran Mandailing people.

While Indonesia is internationally recognized as a leading speciality coffee bean grower, it also attracts attention for its unique Kopi Luwak, or Civet Coffee, which is both the most expensive brew on the market (and responsible for many an uncontrolled coffee-shop gagging incident when people discover how their beans were harvested). Civet Coffee is actually produced from the droppings of the luwak, a cat-like creature. The luwak cannot digest the coffee cherries it eats, so the stone is discharged and used for harvesting. What you are left with is a unique musky flavour.

If you could taste the location where a bean was grown in a cup of coffee, then sipping a Guatemalan brew would reveal the flavours of dense jungle, smouldering volcanoes, and spectacular highlands. Although not as well-known as some coffee producing heavyweights like Colombia, Guatemala produces some of the most fragrant and aromatic coffees in the world from regions around Lake Atitlán and Antigua.

As Guatemala's oldest coffee growing region, Antigua has a rich history of producing beans with a slight sweetness that are sought after all over the world. Farmed in plantations set against the backdrop of range of imposing volcanoes, the coffee from this region grows in a uniquely rich soil that includes traces of volcanic ash.

Ethiopia: the home of coffee

Like a gathering of grandmothers arguing over who’s offspring is the cutest, coffee aficionados the world over have long disagreed on the exact location of where the world’s most popular workplace-productivity-enhancer actually comes from. One thing they generally don’t disagree on, though, is that while the exact valley or hillside may be in dispute, everyone agrees that coffee did originate in Ethiopia.

Arabica coffee is indigenous to the forests of the southwestern highlands of Ethiopia and the bean is believed to be the first species of coffee to be cultivated and consumed as a broth-like beverage in the ninth century by a goat herder named Kaldi.

Even today, so ideally suited is Ethiopia’s climate and landscape for growing coffee that wild coffee tree forests grow in abundance and remain the primary source of harvested coffee in the country.

Brazil: the biggest coffee maker in the world

While it may be better known as the home of samba and postcard-perfect beaches, what many people may not realize about Brazil is that it is actually the largest producer of coffee beans in the world. Although its share of production has fallen in recent decades, in the 1920s, Brazil actually grew 80% of the world’s coffee beans. That means that there is a great chance that your morning cup could have originated here.

Today, large-scale coffee plantations are big business in Brazil and cover vast swathes of land – commonly across the southern states of Minas Gerais, São Paulo, and Paraná. One of the main bean varieties grown in the country is the low-acidity and high-bitterness coffee bean variety, Robusta (commonly used in Italian espresso blends).

Those looking to experience Brazil’s coffee growing history should time their travels to coincide with the unique ten day Coffee Valley Music Festival, or Festival Vale do Café, staged every July in what was once the heart of the country’s coffee production industry in the 1800s. Festival Vale do Café’s attraction is not only the eclectic line-up of musicians and performance artists, but the performance venues themselves, which are often not only town squares and churches, but also cow barns and vast coffee-growing estates typically surrounded by thick rainforest and rolling green countryside.

Drinking coffee is not only a pastime for many time zone-challenged travellers; it is as essential as oxygen in getting through the day. But while many of us pride ourselves on knowing where to get a quality cup in the morning, where that brew actually came from is not only a story worth listening to, but a trip worth taking as well.

G Adventures runs a number of departures encompassing a wide range of departure dates and activities to cater for different tastes. We’re thrilled at the prospect of showing you this big blue planet of ours — check out our small group trips here.