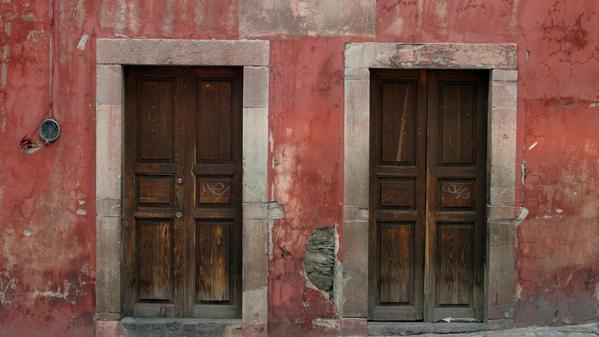 Wanderers-in-Residence Dan and Audrey find that the streets of Oaxaca are making a statement.

by Daniel Noll and Audrey Scott Posted on 06 February 2014

“We thought about freedom. We broke away from traditional rules and impositions and we found out about the liberating power of art.” - Yeska, an artist member of the Assembly of Revolutionary Artists of Oaxaca (ASARO)

Oaxaca, Mexico: Prior to our visit, we knew it as a place renowned for its remarkable cuisine as well as ancient Zapotec ruins and indigenous cultures. What we didn’t know: its rich street art scene and how understanding Oaxaca’s street imagery is crucial to comprehending the region’s living history.

During our first-day wandering around Oaxaca, we discovered a huge wall of street art murals all stitched together. The images that formed the wall hadn’t appeared haphazardly assembled, but rather distinctive and deliberate, gritty yet clearly styled to make a statement.

One in particular captured the spirit and flavor of the scene: “It’s possible to change this world. You just have to wake up.”

Although Oaxaca has always known a strong artistic tradition, it wasn’t until the city’s teachers protests in 2006 that street art began to really take hold as a viable form of resistance and political expression. It was then that the Assembly of Revolutionary Artists of Oaxaca (ASARO) was formed.  The organization and its members aimed to show how street art could raise awareness of current events -- societal forces, economic struggles and the abuse of power -- and bring together members of the community together in the common cause of affecting change.

The more we experienced Oaxaca, the city and the region, the more we realized that street art simultaneously shined a light on modern day socioeconomic and political challenges while grounding the imagery in ancient Zapotec, Mixtec and Mayan culture and tradition.  Messages were universal and timeless: humanity, struggle and conflicts both internal and external.  But their expression was uniquely Oaxacan.

During the two months we spent in Oaxaca, we sought out street art as a fun and fundamental way to better discover and understand the city.  Even if we didn’t always feel as though we fully comprehended what the artist was trying to communicate (isn’t that the beauty of the mystery of art), street art in Oaxaca almost always made us pause and think. And feel. In that way, it had already achieved its goal.

Enjoy more of our favorite street art from around Oaxaca.