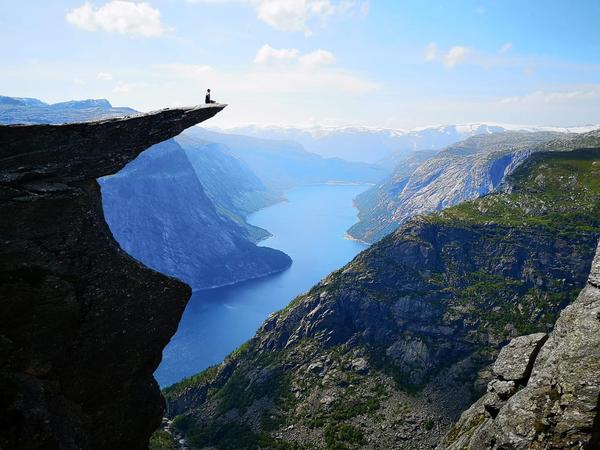 Norway Fjord Trekking - Is it right for you?

Bring a good pair of hiking boots, a waterproof jacket, and your camera.

If you’re anything like me, you’re drawn to nature, feel refreshed and recharged when you’re surrounded by trees, and you like to test your physical limits. These characteristics have pushed me to try my hand at hiking in a few countries around the world, so when I stumbled upon Norway Fjord Trekking, I had to check it out.

This trip begins in Bergen, a charming coastal city with colourful wooden houses and a prominent harbour. On the second day, we headed to Odda by ferry and a private bus.

Odda is my version of paradise: it’s a walkable town with stunning views of lake Sandvinvatnet and the surrounding fjords paired with easily accessible hiking spots and kayaks. Odda also acts as the central meeting point every day, as this itinerary has the unique touch of offering day hikes so you can settle in and forget about your luggage. We stayed at Trolltunga hotel, which was very comfortable but if you’re one to indulge in a cold beer, be prepared for high prices – one bottle cost approximately $21 Canadian.

After checking in, our CEO (Chief Experience Officer), Karl took us on our first trek. This was a slow-paced introductory hike. Karl explained that there is a local law called Allemannsretten which roughly translates to the “right to roam.” This means that the land is free for anyone to use as long as you’re respectful and close any gates you open. We immediately found ourselves trekking through rugged farmland accompanied by sheep as Karl regaled us with stories about the trolls which are said to live in the mountains nearby. We checked out a small cave, a waterfall, and a viewpoint overlooking Odda and the lake before heading back down for the evening.

Although I enjoyed my first taste of trekking in Norway, day three gave me exactly what I needed. We left after breakfast for a full day in the Buerdalen valley. We gained elevation as we walked through farms, past lakes, through forests, and finally stopped for lunch on a rocky outcrop in secluded farmland. I remember feeling calm and happy as I glanced around at the aging barn and horses in the distance when I noticed we had been joined by a small black dog. It turned out the farmer had made the trek himself to check on his land and animals. He explained that this farm is completely inaccessible in the winter due to the remoteness and excessive snow, so he only has his animals here for a few months. He seemed glad to see that we were enjoying his land.

We spent the afternoon surrounded by lush greenery and more ferns than you can count. Our descent was steep at times and since there was some light rain during the day, some areas were slippery. The overall difficulty for this hike is such that most physically active people will have no issue, but once again, a good set of hiking boots is helpful to make it down without mud on your butt.

Day four provided a completely unique experience: hiking on a glacier! I had never seen a glacier let alone spent the day with crampons strapped to my feet. Obviously, this was the most physically difficult day so far. The hike was on the Folgefonna Glacier where we were provided with gear and a detailed safety briefing, before being tied together, and beginning the hike up a ski hill. Keeping pace while climbing up a mountain through snow can be taxing, however, our local guide was great at knowing when to stop so we could practice the safety procedures (while also giving us the chance to breathe).

When we made it to the top, we explored an ice tunnel, navigated a massive crevasse, and got thoroughly drenched before heading back down the ski hill. It is important to note that the group was split in two, my half taking the more challenging route, and the other half spending time on a section of the glacier that was at a lower altitude and easier to reach.

In order to provide the opportunity to explore Odda, day five is a free day so you can choose how to fill your time. Some of our group rented a car to explore the Røldal stave church, another booked a Tyssedal Via Ferrata, and three of us booked a half day sea kayaking session.

Day six is the piece de la resistance. It’s the main reason most of my group decided to take this trip and the destination is Trolltunga, a rock formation that juts horizontally from the mountain creating a cliff that allows for incredible photos. Legend has it that trolls turn to stone when touched by sunlight and one overconfident troll decided to test the theory in hopes of proving the others wrong, when he stuck his tongue out of the mountain he was frozen there for all eternity as this stunning cliff.

Karl explained that you could choose to hike there and back or take the Via Ferrata instead. Most of the group decided to hike although two of us chose the latter option. If you’re feeling a bit adventurous, I would highly suggest the Via Ferrata. We began by riding mountain bikes along the edge of a lake at the base of a mountain for about 6km. The wind felt great and the views, like everywhere in Norway, were stunning. When we reached the hiking spot, we ditched the bikes and started a one kilometer hike nearly straight up. We gained quite a bit of elevation and some sections of the climb required the use of ropes to help you move forward. After this section, we found ourselves at a sheer rockface that had been outfitted with metal rebar steps and cables. Our local guide gave us a safety demonstration and then we began the climb. This was my absolute favourite part. The view got better the further we climbed, and Karl went above and beyond by filming our experience so we could reminisce later on. We ate lunch on a cliff midway up and as always, the view took my breath away. We ended up climbing for a few hours but it flew by because I loved every second of it. A round of high fives were necessary when we reached the top, then we hiked the remaining hour or so across rocky terrain before reaching Trolltunga.

They say life is about the journey not the destination, but when you see Trolltunga — you want that photo. Most people take photos from the top, but our local guides take it one step further and abseil down the rock in order to get the best possible photo of you.

Disclaimer: this is a popular site so anticipate a line up for the photo

Norway stole my heart and I would have loved to trek through their countryside for several more weeks. I’m still friends with Karl so I live vicariously through the photos and videos he takes on his recent hikes, but I need to get back there again someday.

3) Bring a good pair of hiking boots and waterproof jacket

5) The views will take your breath away

7) G Adventures will get you the best photo

8) Norway will steal your heart