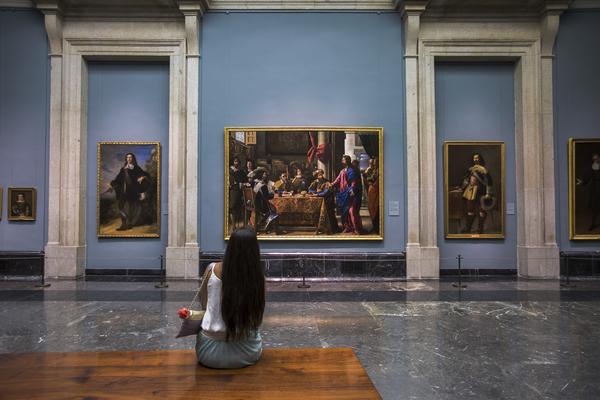 Must-see: The Golden Triangle of Art in Madrid

A couple of years ago I spent three days in Madrid. I didn’t see much of the city, choosing to spend each day in one of Madrid’s famous art galleries. I don’t regret anything. Each day I woke early and descended down to the Museo Reina Sofia (day 1), the Museo del Prado (day 2), and the Museo Nacional Thyssen-Bornemisza (day 3) to stand in front of some of the best art in the world. I quickly came to the conclusion that, if I was ever faced with the impossible task of choosing one city to see art in for the rest of my life, it would be Madrid. The three main art museums, conveniently situated in a “Golden Triangle of Art,” on the Paseo del Prado, the main boulevard, satisfies a range of centuries, mediums, and tastes. The works of art in these three museums create a dialogue between history, politics, and geography that reflects the country.

My first stop, which I ran to in order to take advantage of the free admission on Monday nights, was the Museo Nacional Centro de Arte Reina Sofia which features a vast array of 20th-century art. Picasso! Miro! Dali! Bacon! Situated in a renovated 18th-century hospital, the gallery twists and turns in a maze of rooms and corridors. The layout, paired with the impressive collection of surrealist art, lends to a dizzying experience. The biggest draw at the Museo Reina Sofia, hands down, is Picasso’s Guernica which depicts a bombing in the North of Spain by Germany and Italy during World War II. A marquee painting, Guernica is a guttural and emotive anti-war text. Plus, unlike the Mona Lisa in the Louvre, Guernica is a masterpiece without crowds (of course depending on what day and time you visit). If you’re lucky, you might even get some quality alone time with the important Modernist piece.

On day two, I set my alarm early so I could line up outside Museo del Prado before it opened — eager to get in and spend a full day with the masterpieces inside. I wasn’t the only one with this idea: an hour before the museum opened its doors, a line had formed halfway around the block. I didn’t mind, but my friend, who met me a few hours after the museum opened, didn’t have to wait at all.

The temporary exhibition was sold out, and I didn’t book tickets in advance, so I wasn’t able to visit that particular collection. But the Prado is chockfull of masterpieces, so I didn’t mind. The vast collection spans from the 12th century to the 20th. I quickly oriented myself with the expansive space and began to give myself a tour: El Greco’s elongated figures, Titian’s painting of Mary on marble (like butter!), Goya’s tapestry paintings, unbecoming portraits of the Spanish Royal Family, and finally, his Black paintings. Of course, I was smitten with Las Meninas by Velazquez, which I had spent years looking at in books. I’m happy to say, it didn’t disappoint. I was in art history heaven. The Prado is so magnificent it’s easy to see why it’s a pilgrimage for art lovers.

I spent breaks in a charming jazz bar conveniently centred in between the three galleries for a quick drink with a friend or to debrief with a journal about the art I’d witnessed, before swinging back to the museum to cram in a few more hours of art viewing. Another option for when you need a break is a walk through the park that Museo del Prado sits on — El Retiro. One of the largest parks in Spain, El Retiro includes a rose garden, artificial pond, monuments and sculptures, and sister museum to the Museo Reina Sofia, the Salon de Reinos. If I had my time back, I would pack a lunch and leisurely eat it in the lush park — a work of art itself.

On my final day in Madrid, waning after a month traveling and overstimulated by art, I spent at least an hour simply staring at a painting by Edward Hopper at the Museo Nacional Thyssen-Bornemisza. While the other two museums focus on Spanish art, the Thyssen-Bornemisza’s collection is much more global, including English, Dutch, Italian, American, and French art. The gallery has all the major players you can expect to find in a city’s museum. It felt like visiting old friends: Van Gogh, Bonnard, Picasso, Degas, Monet. After visiting some of the world’s masterpieces, the collection at the Thyssen-Bornemisza felt achingly familiar. After a day inside its walls, I was ready to board a plane and return home.

Check out our small group tours to Spain here.