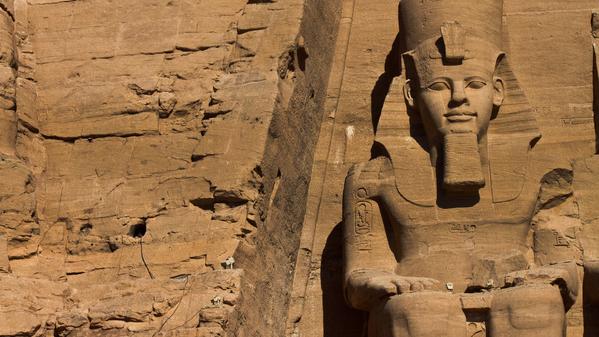 Egypt is full of grand monuments to its rulers, but of all the pharaohs, few left their mark like Ramses II. His temple at Abu Simbel is his masterpiece.

Like Tutankhamun before him, Ramses II came to the throne as a callow teenager. But while the first boy-king is remembered for dying early and leaving behind a stash of pretty gold and a dubious curse, Ramses II grew up to be the most powerful pharaoh in Egyptian history. He reigned for a cool 66 years, giving him a lot of time to celebrate himself in stone. At Luxor, he expanded the stupendous Temple of Karnak, but in Abu Simbel he fashioned his Temple of the Sun as a tribute not just to the gods, but also to his monumental pharaonic ego as well.

Abu Simbel is so far south in Egypt you can almost see the Sudanese border (but it hasn’t always occupied its current spot). It's easily accessible via a short plane ride from Aswan, but is such an out-of-the-way spot that its treasures were forgotten by the outside world until two centuries ago, when Egypt became a fashionable destination for European explorers.

Their first sight of Abu Simbel must have been extraordinary. A cliff face transformed into a huge sand dune over hundreds of years, emerging from which were four giant seated statues of the king, which were more than 20m (65 ft) high. At their base — and after an awful lot of digging — the inner chambers were revealed; they’d been dug into the cliff face. On every wall were relief carvings, at first beating the drum for Ramses II's virility in battle and then giving way to religious humility as the pharaoh made offerings to the gods.

Egyptian temple images often speak of the pharaohs' desire to ensure their place in the afterlife, but the romantic poets of the day thought otherwise. Shelley's cautionary poem Ozymandias is titled for the Greek transliteration of Ramses. “Look on my Works, ye Mighty, and despair!” his broken statues cry, as they look over their lost kingdom of sand and ruin.

And yet Ramses II's temple at Abu Simbel has had an afterlife no less monumental than its original construction. In the 1960s, the new Aswan Dam was built to control the Nile floods and generate electricity for rapidly modernizing Egypt. Nearly two dozen archaeological sites had to be moved to save them from the rising waters of the newly created Lake Nasser. The Temple of Philae, a popular attraction in Aswan was one such site, but the challenges of Abu Simbel were even more epic.

Overseen by UNESCO, the giant figures of Ramses II were carefully sliced into a series of 20-tonne blocks and slowly moved away from the lake piece by piece, before being fitted back together like a giant game of Tetris into a specially constructed artificial cliff. The whole operation took four years and cost USD$300 million in today's money. But the relocation was so precisely measured that twice a year, in February and October, the rising sun penetrates all the way to the temple's interior, illuminating the sun god's inner sanctum as it did when the temple was originally constructed.

Such was the power of Ramses II to command his subject's descendants to move mountains for him when he had been dead for 3,200 years. Perhaps he really did know a thing or two about the afterlife after all?

G Adventures runs a number of departures in Egypt encompassing a wide range of departure dates and activities to cater to different tastes. We’re thrilled at the prospect of showing you this big blue planet of ours — check out our small group trips here.