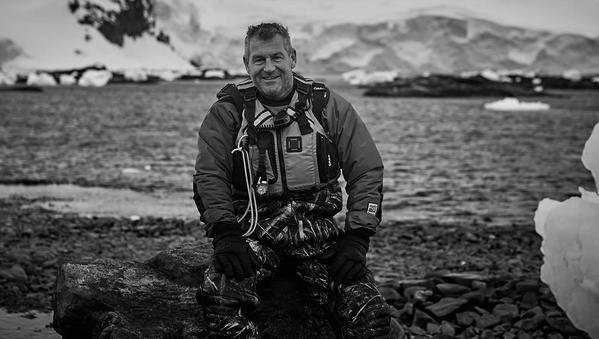 ...and learn how G Adventures and Planeterra are helping Green research whale sharks in the Galápagos

"I was always interested in polar exploration, and fossils, and dinosaurs," Green says over the phone from the G Adventures Expedition, at the time docked in Ushuaia and ready to set sail through the Drake Passage and on to Antarctica. Because of this, he studied earth sciences in university, with a mind to working — "ironically," he notes — in the oil industry.

But after graduating, there wasn't much work in oil, so he started travelling instead. "Whilst I was in Spain I heard about work in the Galápagos, and I started working there as a diver and a naturalist. I was very keen on conservation and I started working with various projects. I realized that part of the work was being done in a huge area, and very little was done about the iconic species, like whale sharks. A whale shark is actually a dinosaur — they predate the last mass extinction. It gave me the opportunity to study dinosaurs in real life."

What sounds like a dream come true for anyone who found themselves fascinated by palaeontology in their youth — and really, who wasn't? — has turned into a mission for Green, now a G Adventures Expedition leader and renowned naturalist, photographer, and conservationist. In 2011, he set up the Galápagos Whale Shark Project, which — later this year and in partnership with the Megafauna Marine Project — will embark on a significant field research trip with funding provided by the Planeterra Foundation to study population data for the species in the Ecuadorian islands. And earlier this year, that mission became a springboard to stardom of sorts, as Green and his work were featured in an episode of the massively popular BBC series, Blue Planet II.

"We were told by the BBC the programs would be aired probably to an audience of about a half a billion people," Green, who was reached aboard the Expedition ahead of its southbound departure to Antarctica, says. "If you say, 'This is Jonathan Green of the Whale Shark Research Project,' people might say, OK, that's nice. But if you say 'This is Jonathan Green, whose project was filmed by Blue Planet,' people say, wow, this must be something serious. As you can imagine, if you work in this field, you know that fundraising is the most soul-sucking activity you can be involved in." Which is to say: the exposure afforded by Blue Planet might help Green continue his research well beyond Planeterra's investment.

In the meantime, Green is busy on board the Expedition coordinating and leading off-ship activities, from kayaking in the South Polar regions to setting foot on Antarctica. He sees a strong connection between the work done on board the Expedition — which includes daily lectures from a series of experts — to educate travelers, and conservation; sustainable, responsible travel, to Green, is integral to the conservation efforts of the future.

“I think what it comes down to is that any form of travel is education,” he says. “It's awareness, and awareness leads to conservation. You can say that what we're doing in the Antarctic is travelling to a sensitive area, and obviously we take all the precautions we possibly can, but everywhere that humans go we tend to leave a trail of destruction behind us. But I think if you simply shut off these areas to well-intentioned travellers, then you are basically turning a blind eye to them, and nobody will care about them. Unless you create that awareness, then there never will be an opportunity for conservation.”

Want to set sail for Antarctica? G Adventures can get you there. Check out our small group tours to Antarctica here.