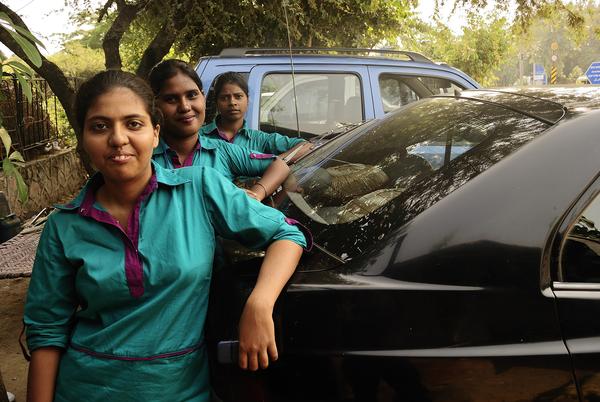 Meet 5 women whose lives have been changed by tourism

Learn how sustainable travel is making a difference in the lives of women around the world!

At G Adventures, we believe that sustainable travel can play a tremendous role in impacting how we see the world. We also believe that it can make a difference. To celebrate International Women’s Day, we’re taking a look at how G Adventures and The Planeterra Foundation are working to ensure that travel is directly benefiting women — who make up between 60 and 70 percent of those employed by the tourism industry — who are taking part in our programs. Read five of their stories below.

Planeterra and G Adventures granted a third of the funding for the vehicles used by Women On Wheels, a program in New Delhi that empowers women by providing the training and resources they need to become professional, self-sustaining commercial drivers. Women who take the course are also trained in basic first aid and self-defense, and take lessons in communications and women’s rights. Women On Wheels is the official airport pick-up partner of G Adventures, so if you take one of our tours through New Delhi, you’ll be able to meet one of the women who the program has helped toward independence and confidence. There are currently 15 Women On Wheels fleet vehicles on the road in India. That includes the one driven by Neha, who was separated from her family as a child, was raised in a children’s home and then a hostel for women, and as a result grew up with very little confidence. After being injured in a bus accident, she joined the Women On Wheels program, and now earns a living for herself — and has developed a newfound sense of courage and confidence.

Alongside Give a Heart to Africa, Planeterra’s Moshi Mobile Mamas program in Tanzania provides training to 30 women a year and seed funding to graduates to kickstart their own businesses. It helps provide a radical life change for women in the patriarchal country, where only five percent of girls finish secondary school, and where boys and men are afforded far greater opportunities for schooling and employment than their female counterparts. G Adventures gives women in the Moshi Mobile Mamas program an opportunity to practise their English and presentation skills, and G Travellers receive handmade bracelets from the women in the program. Husa, who attended the program in 2015, grew up in a home where her father encouraged her brothers to go to school, while she stayed home. The business training she received through Planeterra and Give a Heart to Africa means she’ll be able to earn her own money — and make sure all of her children, including her daughter, will be able to go to school. Writers Audrey Scott and Daniel Noll learned about Planeterra's programs in Tanzania firsthand. Read about their visit here.

Access to education in the communities surrounding Siem Reap is scarce. At the New Hope Cambodia Outreach Centre, Planeterra helps facilitate free education, training, and counselling programs for young people in the region. The Centre’s training restaurant, which is visited by around 8,500 G Adventures travellers per year, employs 24 people in the region — including Linna. Linna was born in rural Cambodia, and after her father passed away, her mother struggled to raise four children alone. She worked briefly as a car cleaner in Phnom Penh, but after losing that job, found herself unemployed and with little support. She was one of the first staff members hired by the New Hope restaurant, and now works as its head waitress. Linna hopes to open her own restaurant someday.

Alice at Café Ubuntu and Ubuntu Made, Kenya

The settlement of Maai Mahu is along what is known as the “AIDS Highway,” and has a large population of orphaned children and an 80 percent unemployment rate. With Ubuntu Lunch, G Adventures provides travellers en route to the famous Maasai Mara a healthful place to stop for lunch. And the adjacent Ubuntu Made program empowers local women to produce handmade goods and crafts, which are sold at the café and internationally. Proceeds from both go toward the Ubuntu School, which provides therapy, education, and vocational training for children who live with disabilities. One of the women who works with the program, Alice, has five children, one of whom has a disability. She makes products for Ubuntu Made, and is proud to be independently building a bright future for her children. Around 250 G Adventures travellers visit the Ubuntu projects in the area, which benefit around 1,200 people.

On the island of Ometepe in Nicaragua, Planeterra and G Adventures have partnered with the community of La Paloma to develop a homestay program and visitor centre. Lack of job opportunities on Ometepe often leads locals to emigrate in order to find work, with women and children left behind on the island. Planeterra’s project in the area provides a stable income to the small community, which had previously had no infrastructure in place that would allow it to benefit from tourism. The Pueblo Hotel homestay program now hosts G Adventures guests once a month, and more than 30 families benefit from the influx of tourism — including Karla, a single mother on Ometepe, who has been able to finish her house and open a small grocery store with the money she has earned working with Planeterra.