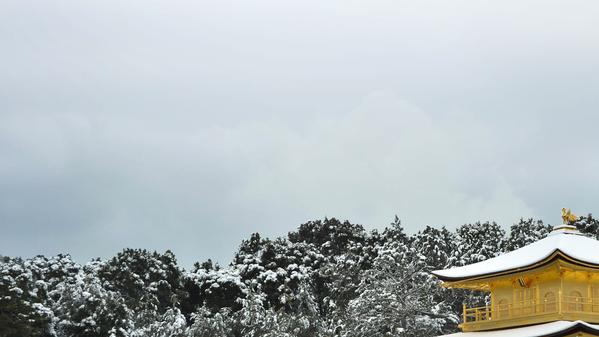 Head to Japan in winter and find a wonderland of experiences you won’t have access to at any other time.

The village spills down the side of a mountain carpeting the valley floor with farmhouses. A light snow dusts the terracotta rooftops like icing sugar on a freshly baked cake. The stream runs silent, frozen in time. The moon is a faint grey orb that sleeps behind a thin blanket of clouds. There are no cars on the road. No other people. Everything is still.

If your idea of a winter getaway involves scaling a mountain to test the limits of gravity, or drinking your way through a ski village to the backdrop of bad techno and, even worse, dancing, then you may just be out of place in Japan.

From famous onsen hot springs, to unique winter festivals and some the most unusual celebrations of food around, Japan is a winter destination like no other.

Steam fills the room. The ceiling is cloaked in hot cloud. You crouch on a small wooden stool, bending and twisting limbs to maintain balance as you pour a bucket of water onto yourself. Clean, you walk into a room with several pools of water — each of a different temperature. Easing into the hot pool and feeling muscles loosen, you can't help but feel that the whole experience would be relaxing if you weren’t naked in front of a dozen strangers.

If taking a bath with a bunch of naked guys (or girls) isn’t your thing, look away now. But for those travellers not afraid of a bit of flesh, Japan's proud tradition of onsen's are a not-to-be-missed experience. The perfect antidote to a cold winter’s day, Japan is home to more than 3,000 naturally occurring hot spring onsens.

One of the most historic onsens can be found amongst a charming collection of inns in a picturesque valley in the Kumano mountains. Thought to be one of the oldest hot springs in Japan, Yunomine Onsen was discovered roughly 1,800 years ago and is home to the only UNESCO World Heritage registered hot spring that people can bathe in. Part of the ancient Kumano pilgrimage, Yunomine Onsen is also where hikers undertake purification rituals in the hot mineral waters in preparation to worship at Kumano Hongu Taisha.

This winter a different kind of sculpture will be on show in Japan — the mythical, short-life snow sculpture.

The Sapporo Snow Festival began in the 1950s when a group of local high school students created some small snow sculptures in a park. The following year, members of the local community joined in to build a giant snow statue. Today the event is one of Japan’s most celebrated winter festivals, attracting millions of visitors and showcasing some the most innovative snow art anywhere in the world.

Held in early February, the Sapporo Snow Festival features roughly 400 snow statues across the city covering such themes as celebrated sportspeople, famous musicians, palaces, dinosaurs, and even Darth Vader. If you’re looking for a more active festival experience, you can try to navigate a giant maze made out of snow, or fly down an ice slide before taking your taste buds on a journey and sampling a variety of regional foods from the many market stalls.

A row of ancient ochre-walled houses line the narrow streets. The stone paths seem to be designed to deliberately disorientate by winding one way, and then another. The streets are calm, quiet. You feel the weight of eyes watching and half expect that in the shadows, an ageless warrior waits, gripping a sword and anticipating your movements.

One of the best-preserved locations to experience the country's famous samurai history, Kanazawa is located in western Japan. Spared from much of the destruction that occurred during the Second World War, Kanazawa has maintained its mythical castle towns from the Edo period when samurai were prevalent as the officer caste of pre-modern Japan and helped maintain order.

Kanazawa is one of a handful of places in Japan to have an original samurai district, called Nagamachi. Winter travellers looking to immerse themselves in samurai culture should visit Nomura-ke, a restored samurai residence that houses a collection of artifacts from the era, and gives unique insights into the samurai lifestyle.

From sashimi — raw tuna sliced so thin that it melts on your tongue and appears transparent to the light — to tempura – light, fluffy fried vegetables — to Yakitori — charcoal chicken grilled skewers of deliciousness — Japan has a proud history of food innovation. While your chopstick skills are set for a workout this winter as you punch an extra hole in your belt to fit in that last stand of soba noodle, those looking to celebrate one of Japan’s best-known dishes must visit the Instant Ramen museum in Osaka.

G Adventures runs a number of departures in Japan encompassing a wide range of departure dates and activities to cater to different tastes. We’re thrilled at the prospect of showing you this big blue planet of ours — check out our small group trips here.