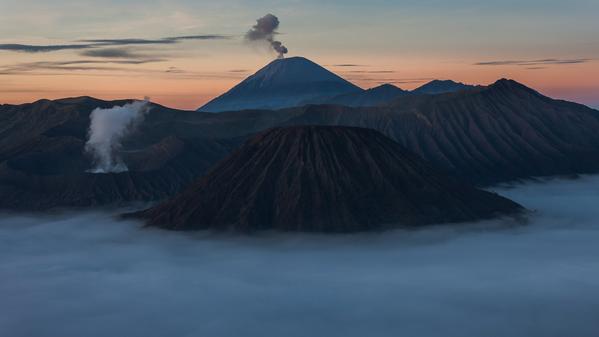 Indonesia is Much More Than Just Pretty Beaches

This country's filled with experiences that will make you want swap your sandals for walking boots.

Of the friends and family I polled, while preparing for a trip to Indonesia, the famed resort and beach-filled island of Bali was the most commonly known aspect of the country I would be spending October traveling through. Everyone seemed to have already been or at least have an idea of it; yet, only it. A fair insight as for myself too, it was my only knowledge prior to the moment my plane touched down in overcrowded Jakarta on the island of Java [Indonesia's largest]. And while I did spend a few nights in Bali, in my opinion it was actually amongst the least impressive places I got to know.

So, what can one find in Indonesia besides pretty beaches?

There are many beautiful temples all over the islands of Indonesia but Borobudur, at sunrise, was my favorite. It is a Buddhist temple and was built in the 9th century during the reign of the Syailendra Dynasty. It is also Indonesia's most visited tourist attraction.

Though it is a far cry from the kind of luxury resorts one finds in Bali, I loved traveling through Kalimantan [Indonesian Borneo] on a Klotok boat to visit orangutans in their natural habitat. It's an experience I would recommend every traveler take part in at least once. The Orangutan Foundation International is doing an incredible work in the jungles to preserve and sustain the natural habitat and way of life for orangutans.

Watching craftspeople manufacture Batik -- and even getting to try it for myself, it's harder than it looks -- was one of the most interesting things I've ever seen. Batik fabric has so much history and significance behind it yet when you look at completed pieces of fabric you'd never imagine just how much skill must go into making it.

Indonesia has more than one active volcano. Though, I would highly recommend watching the sun rise over the still-smoking craters of Bromo, Batok and Semeru from the top of Pananjakan. Afterwards, drive over the plain and climb to the top of Bromo. Though a far cry from sipping coconut water on the beach, it is its own reward.

The Royal Palace of Yogyakarta's Sultan, who is now more of a governor, is extensive and ornate. Visiting during the early morning hours before large crowds form will allow you to better see all the details as well as to learn about the dynamic history of Indonesia and how the fabric of its 238 million citizens has changed as the country has enlarged its borders and evolved its government to now include 34 provinces and become the world's fourth most populous country.

There's a reason Komodo Dragons were recently featured in 'Skyfall' as man-eaters. They're truly beasts of the animal kingdom. However, visiting the chain of islands where they come from in Indonesia, which are aptly named after them, will help you understand the difference between fear of and respect for an animal that's been so oft misunderstood.

If you're heart is still set on a good stretch of sand and sea, Pink Beach in the Komodo Islands was my favorite.

However, when you find yourself booking that trip to the 17,508 some islands that make up the archipelago of Indonesia, I urge you -- plan for enough time to explore the country at length. It is as diverse as it is large and far more beautiful than even the most glowing cliché would suggest.