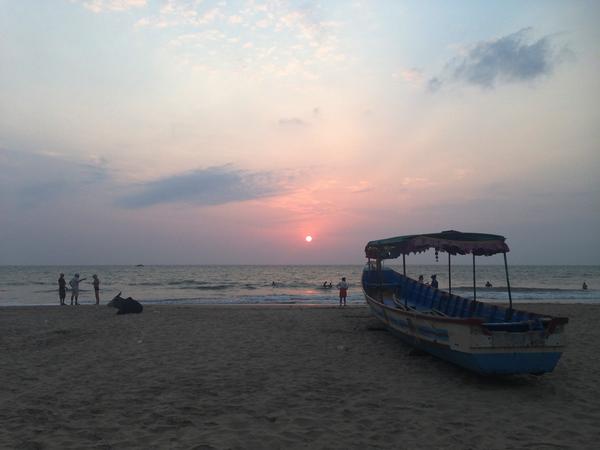 In India, there's mindfulness when you least expect it

The country can be overwhelming. It helps to sit down and shut everything out — even if that's not what you were planning on doing with your day

It was my fourth week on the road when the India funk kicked in. This is when the lustre of the most enthralling country on Earth gives way to smog, crowds, contaminated water, scammers, endless traffic and a wealth gap so wide even Hanuman couldn’t leap across it.

I was languishing in the holy coastal town of Gokarna, on the serene Kudle Beach. Gokarna is a placid town just south of tourist-riddled Goa, dotted with beaches and temples, about as idyllic as travel destinations get. But I was ready to leave.

What I needed, even if I didn’t know it, was a cave. A holy cave. And nestled in Gokarna’s tangerine-hued foothills there happens to be one dedicated to Shiva, the Hindu god of destruction. Locals say Shiva Cave is very sacred and very ancient, that it has drawn pilgrims, saints and seekers of enlightenment from across the subcontinent for thousands of years.

I don’t know how much of that is true, but what I do know is that before venturing to a holy cave, one probably needs sidekick, and I had the perfect candidate in the form of Han, a domestic traveller from nearby Kerala. A distinct oddball from my guesthouse, Han was either a nascent prophet or a living caricature of one.

I sought out his trademark bandana, beard and sunglasses and found him standing on the beach, chieftain-like, gazing across the ocean. He was in all likelihood contemplating infinity. I invited him to Shiva Cave and, well, Han would never miss an opportunity to better connect with the sacred oneness of everything.

“I am always thinking, I am nothing,” is a thing Han says. “I look at this world and think, how can I be anything in comparison to it?”

Following the loose directions another traveller had given me, Han and I set off across the beach toward the stony hills nearby. We were instructed to seek out a tattered flag, the only indication that there might be a place of interest in the vicinity. Like many sites in India, Shiva Cave is just there, unadvertised, waiting for someone to find it.

At first I didn’t think we’d make it before dark, because Han — well, let’s just say, he doesn’t rush. He’s the kind of guy who pauses to appreciate seashells, or approaches stray dogs to meld minds with them, or throws his arms up in jubilation every time he sees a cow. And there are lots of cows in India.

But even at Han’s pace, we made it to the stark flagpole that marks Shiva Cave. Nearby, a sadhu — a wandering spiritual seeker — meditated atop the mouth of the cave in his saffron robes.

Sadhus are commonplace in India, yet I still find them fascinating. It’s surreal to me that a country exists in which it’s considered respectable to abandon all worldly ambitions, don a robe and simply wander the earth, seeking enlightenment. Sometimes I think we have it backwards in the west, where we scorn people who don’t strive for material success.

Like many religious figures, sadhus can be contentious. Many of them are genuine truth-seekers, but some of them are just looking for handouts, so you need to be careful around them. I didn’t have time to think about that though, because Han made a beeline for the sadhu, and I followed.

We began talking about spirituality right away. This is a thing that happens everywhere in India. One minute you’re haggling with your rickshaw driver, the next you’re pondering the nature of reincarnation with them.

We talked about why unwanted things happen, and on that point we generally agreed that the unwanted only happens when wanting happens — no wanting, in other words, no unwantedness.

The sadhu told us about how difficult his chosen path was at first, having no home and no money, but said he now lives a life of complete contentedness, having nothing of significance to lose.

Then came the important question.

“Do you have any ganja?” the sadhu asked, to which Han — not at all surprisingly ­– said yes.

Han pulled out a small bag and the holy man took out a stubby chillum pipe, which is how sadhus prefer to smoke. Because, although ganja is a strictly regulated drug in India, sadhus smoke it frequently, and the police generally turn a blind eye.

We shared exchanges on the pipe and watched the sun set. The sapphire ocean was visible from our perch above the cave entrance, along with green thatches of surrounding jungle, and I felt a bit embarrassed that in my recent frustration with India I had not appreciated how peaceful and pleasant Gokarna really is.

The sadhu got to talking about how ganja helps with meditation (it does, he said, unless you smoke too much), and then he decided it was time for us all to meditate together.

We walked down to the cave entrance and removed our footwear, as we would before entering any temple in India. Inside, the cave was not much to look at: Just a musty main cavern, worn and dark, with a few chambers branching off. At one end was an alcove with a small statue of Shiva, behind some meagre offerings.

The sadhu lit candles and incense. We assumed meditation postures and he began his lesson. He told us to delve into the subconscious, to stop using our intellect.

As we sat in the darkness, I heard a fluttering noise, then another. Bats. The cave was full of them. Meditation is often difficult, but I found it even more so tucked away in a dark, bat-filled cavern, accompanied by a strange wanderer of unknown origin.

It occurred to me that back home, in Canada, I would never venture into a random cave at the beckoning of a homeless person I’d just met. But instead of letting my thoughts spiral away from me, I returned to the gentle sensation of my breathing. I relaxed into a kind of meditation, cultivating a focused disinterest in fleeting thoughts.

As I sat still I began to discern a patina of reverence in the air. The cave began to feel very ancient. Rather than being jarring or distracting, there was actually a peaceful quality to the sound of the bats’ wings as the tiny rodents navigated the darkness of the cave. They had probably been here, adding to the mystique of this place, since humans first stumbled across it.

I’ve visited many holy sites over my lifetime — cathedrals, temples, mosques — some of them unearthly in their beauty. But none have felt so genuine, so actually holy, as Shiva Cave did that day. It’s a place that costed nothing to build or maintain, a place considered holy not because it’s ornate or even pretty, but simply because it exists.

Eventually Han and I left the cave and the sadhu. We meandered back to the top of the cave and examined the night sky. There was a thunderstorm approaching, and webs of lightning lit up the darkness. Han, incapable of self-consciousness, outstretched his arms and gazed upwards, awestruck.

This is what it’s like traveling India. Just when you think you’re ready for the sterile banality of home, it gives you a whole new reason to love it again. I’m glad I met Han. I’m glad I met the sadhu. And I’m glad I spent an evening meditating in a bat-filled cave. What had I been so stressed about anyway? I am, after all, nothing.