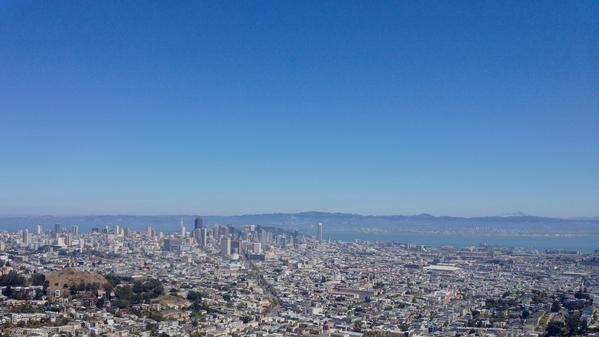 I Left My Heart in San Francisco

It’s easy to fall in love with San Francisco almost immediately. The city breathes creativity and exudes a free-spirited, quirky vibe that you just won’t find anywhere else. No surprise, then, that it helped birth America’s hippie counterculture in the 1960s.

Not only does this city lay claim to the best clam chowder in a sourdough bread bowl, but it is dotted with plenty of unforgettable spots to visit – all of which are uniquely San Franciscan.

Should you find yourself in this wonderful city by the bay, make sure you don’t miss the following:

What would a visit to San Francisco be without a ride on a cable car? Besides walking, this is by far the best way to get around the city, so hop on and enjoy the ride! In operation since the late 1800s, these cable cars run on an intricate underground pulley-system, making them green friendly before green was “in”.

Yes, the Wharf is touristy, and yes, it gets busy, but it’s well worth a visit nonetheless. This is where you’ll find San Francisco’s famous sea lions, who commandeer a dock in order to soak up the sun. In recent years, the sea lion population here has dropped dramatically, but there are still plenty of these loud, smelly, sea beauties sunbathing on their favorite flotilla. Try going early in the morning or in the evening in order to best avoid the masses and to get a great view.

You’ll also find a number of shops and restaurants lining the pier, most filled with kitschy souvenirs and higher prices, so try to save your money for later. With a small fair and crowds drawing buskers, it can be a fun place for photo ops as there’s always a lot going on.

Aquarium of the Bay

It’s just a stone’s-throw from Pier 39 (literally right next door), so skip on over to this underwater realm. The aquarium is host to some amazing sea life, including an octopus and an entire room dedicated to jellyfish. Spend some time observing their ethereal forms – it’s sure to leave you breathless.

Take the ferry through “shark-infested” waters to arguably the most notorious prison on the West Coast – Alcatraz. To name a few of its infamous tenants, it was once home to Robert Stroud – “Birdman of Alcatraz” – and Al Capone. This prison is now open to the public as a historical site and offers tours daily.

This by far is the most iconic landmark in San Francisco. Check out its towering orange suspension cables and awesome views over the Bay Area. Cross over the bridge to the north side and get some stunning photos from one of the many observation spots along the roadside in the winding Marin Headlands.

Affectionately called the “Zigzag” road, this one’s a doozy! Not only is it the most crooked street in the world, it’s also on top of a ridiculously steep hill. With houses perched perilously all the way up the slope and cars winding their way through the narrow hedge-filled street like an awkward game of Tetris, there’s certainly a comical and fun element to this insane layout. Be sure to stick around and observe the madness.

Enter through the majestic pagoda arch into San Francisco’s Chinatown, the oldest and largest of its kind in North America. Grab dinner at one of the many restaurants in the district, followed by an evening walk to peek into the dozens of curious shops Chinatown has to offer. You’ll be charmed by the red lanterns, which are strung up and down the narrow streets.

Whether it be the jellybean-coloured houses that dot the wildly hilly streets (trust me, you’ll get a great workout walking around this city for a few days), or the mist that rolls in every morning from the Pacific like the tentacles of some giant sea creature – you’re sure to be drawn to the unique charm and warm demeanour of its citizens. There’s a line in a famous old song that says, “I left my heart in San Francisco.” Once you’ve been, you might, too.